Unchaining Your Pathfinder Game: Alternative Rules for the Pathfinder RPG

There are a lot of rules to get the hang of in Pathfinder, with the various supplemental books providing numerous additional options to expand the scope of your games. Yet as you get more comfortable with the Pathfinder rules, you may find that not everything is exactly to your liking.

While you might find the overall game enjoyable and fun, a rule here or there may seem slightly less fun. The fact is, no roleplaying game (whether it’s Pathfinder or Dungeons & Dragons or any other game) can ever provide the perfect gaming experience for everyone.

As such, many groups create their own “house rules”. These might be minor things like a small adjustment to the way a feat or spell works. Or they might be major, such as changing the progression of one of the classes or completely reworking the way combat runs.

Developing house rules is a very individual thing, and it’s not uncommon for groups to change or adjust their house rules over time, as something that seems to work in one situation doesn’t quite work in another. 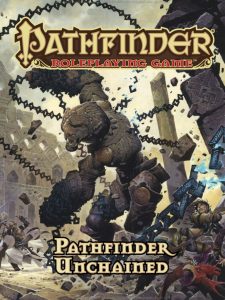 If you’re thinking about modifying some of the rules for your own games, there are resources that can help you with new ideas. Pathfinder Unchained is essentially a book of house rules. Unlike other books, which mostly provide new options without changing the core, Pathfinder Unchained offers alternative Pathfinder rules to the core rules themselves.

Amongst the various things in Pathfinder Unchained are new versions of four of the classes: the barbarian, monk, and rogue from the Core Rulebook; and the summoner from the Advanced Class Guide. The extent of the changes varies from class to class. The rogue is only slightly changed from its core version, gaining a few new abilities to strengthen it (as many people feel the rogue is underpowered compared to other classes). The monk, on the other hand, is significantly reworked.

But these alternative versions of classes are only the start of what you can find in Pathfinder Unchained. There are several different options for handling skills in the game, and alternative ways to run combats, including an entirely new “action economy”, which determines what you can do, and when, in combat.

There is a new system for dealing with disease and poison in the game, as well as alternative ways to track hit points and wounds.

There are various different ways to modify spellcasting. There is a simplified spellcasting system, as well as an alternative way of handling spell components.

Some people feel core Pathfinder is too reliant on a small group of magic items that every character must have in order to be effective, meaning that there are tons of magic items in the game that never get used. Pathfinder Unchained contains several alternative systems that can reduce the game’s reliance on these few items.

Finally, there are simplified rules for monster creation. Being a gamemaster can be a time-consuming job, and creating monsters can be one of the lengthier parts of that job. This new system is designed to reduce the time it takes to create a monster, making a gamemaster’s job just a little easier.

Pathfinder Unchained is not the kind of book you would ever use everything from in the same game. There are often multiple alternatives for the same thing, making using them all impossible.

However, what Pathfinder Unchained does do is give you all kinds of examples of how to change your own games. You might choose to use some of these, or even to use modified versions of them. Or they might inspire completely new ideas in you.

That’s part of the wonder of roleplaying games. They are limited only by our imaginations, and we can make of them whatever we want. Pathfinder Unchained gives us the tools for just that.

You can get Pathfinder Unchained here.