The Purge: Election Year is a busy movie. In a little over 100 minutes, it builds a biting criticism of American culture, including crime, poverty, gun ownership, religion, and Florida’s importance in national elections. It’s a huge, bloody, over-the-top stylistic explosion with, at best, a feeble grasp of the concept of subtlety. As an action vehicle, Election Year is exciting, loud, and fun. As a social commentary, it’s unapologetic and obvious. There’s no way to ignore the message that writer/director James DeMonaco is trying to convey. I don’t think this is a bad thing–District 9 is one of my favorite movies, and it’s about as subtle as a fish to the face.

Purge: EY is the third movie in the Purge series, and like the first two, is written and directed by DeMonaco. The premise is simple: 20-odd years ago, the New Founding Fathers of America created the Purge, where, one night a year, all laws turn off, and people can go bananas, killing, looting, and generally misbehaving (the idea being that they “purge” all of the wickedness they’re keeping bottled up, and thus can be pretty chill for the other 364 days of the year).

Senator Charlie Roan (Elizabeth Mitchell) is running for President to end the practice, which she claims disproportionately affects poorer, minority communities. It’s the first of this movie’s many, many bits of social commentary (many of which are offered in an expository newscast that’s so hilariously obvious it verges on self-parody). This puts a target on her back, and the movie follows her, her bodyguard (Frank Grillo), and a ragtag team of civilians trying to survive Neo-Nazi mercenaries, crazed Russians, and angry schoolgirls.

I don’t think Election Year is going to be held up as one of the greats in the canon of American filmmaking, but I do think it’s a movie that’s better–at least, more entertaining–than it has any right to be. For all the absurdities inherent in the premise (so, if all crime is legal on Purge Night, are there a lot of embezzlers and white collar criminals cheating on their taxes? What happens to the global stock market if inner-city infrastructure gets destroyed once a year? If you shoot somebody, but they don’t die until the Purge is over, is that still a crime?), it’s a tremendously striking film. The visuals, especially the costumes, look like a cross between Fury Road and a My Chemical Romance video. Throughout the movie, little glimpses of the horrors of Purge Night deepen the sense of mass hysteria and go a long way toward establishing a very tense, creepy mood.

DeMonaco’s script is competent, although I doubt it would hold up to any sort of rigorous analysis. It’s formulaic, but rarely boring, and there are moments (most of them from Mykelti Williamson, who looks like he’s having a great time) that break the tension and add a little bit of unpredictable levity to an otherwise grim, nightmarish story. All of the actors deliver their lines with scene-chewing relish, especially Brittany Mirabile, who manages to make party lights and candy bars terrifying.

If you read my last breathless, desperate article, you’ll remember I mentioned Election Year as a film that presented viewers with “the implied or explicit collapse of civilization.” It’s definitely a movie of the times, playing on the current uncertainty in the political atmosphere, the fear and general craziness that’s making this summer seem even more stifling than normal. That’s nothing new; there’s a long tradition, going back to The Day the Earth Stood Still, of science fiction movies offering social criticism masquerading as pop entertainment.

Election Year joins Hunger Games (and its many imitators) as a recent film that attempts to address our country’s fascination with violence, and that aspect of the movie is remarkably successful. Again and again, violent imagery is blended with either a frat-boy party atmosphere or religious iconography. It’s exaggerated, of course, but it rings truer than I’d like (then again, maybe I just need to stop reading the news). As ludicrous as the whole idea is, there’s a spooky amount of verisimilitude in the whole thing.

Am I saying that we’re one election away from a Purge Night of our own? Of course not. Purge: Election Year is far-fetched and implausible. But so were 1984 and Fahrenheit 451, and we would still do well to heed those warnings. These are volatile times, and a movie like this is a glimpse of one future, one where we let the worst in us overpower the best.

It’s not the policy here at Nerds On Earth to offer depressing, sobering, and grim portents of the days to come. As an apology, I offer my third-favorite comic book panel of all time: Batman preparing to taser-punch a crippled man. 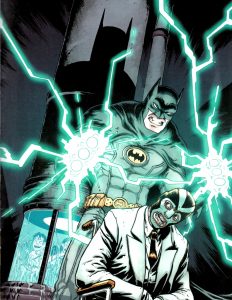 Purge and Purify, everybody!

Unchaining Your Pathfinder Game: Alternative Rules for the Pathfinder RPG