The Silmarillion, Nerdsplained: Beren and Luthien

So far we’ve taken closer looks at the Valar (Part 1) and the Silmarils (Part 2) themselves.

For this edition of The Silmarillion, Nerdsplained we thought we’d dive into a topic that’s a little more meta. It’s no secret that J.R.R. Tolkien was a Christian, and that his faith made its way into his writings in many ways–some more obvious than others. But a lesser known fact about Tolkien is that he saw himself and his wife Edith as some very important characters in the story.

A Brief History of Elves and Men
Okay, so from the beginning, Illuvatar (God) created all things, including the Valar. He showed the Valar a vision of creation and charged them to make it happen. He did not, however, tell the Valar anything of His children – Elves and Men – because he wanted it to be a grand surprise for them.

The Elves were created with basically unending life; they didn’t die of old age or disease, though they could be killed in battle or through accidents. Elves came first, and because of their incredibly long lives they were prone to develop great wisdom and patience.

Mankind came second, and was given what The Silmarillion refers to as the gift of death. Death is viewed as a gift because it caused mankind to burn with a fire of urgency. This fire led men to accomplish great deeds in their relatively short lifetimes. This fire also caused men to be rash and impulsive, often ill-considering their actions.

One Heckuva Love Story
During the period when Men and Elves were periodically fighting the evil Valar, Melkor, a man named Beren came across an elf maiden in the forest named Luthien, and immediately fell in love with her. Not “wow, you’re pretty, can we get together?” love, but “I will literally go to the ends of the earth and work the rest of my life to get together with you” love.

Luthien was apparently the most beautiful elf that has ever lived, bar none.

He asked Luthien’s father Thingol for her hand in marriage. Thingol was… not inclined to acquiesce to Beren’s request. Basically in an effort to get rid of Beren, Thingol told him that if he could bring back a Silmaril from the crown on Melkor’s head, then he could marry Luthien. So he did. I’ll say it again, for emphasis…

Beren took a Silmaril from the Melkor’s crown. While. Melkor. Was. Wearing. It. 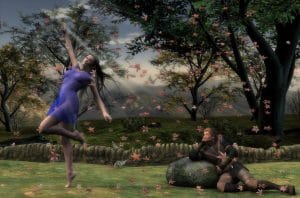 He had a lot of help, to be fair. Luthien herself had accompanied him against her father Thingol’s wishes. She sang a magical song that put Melkor to sleep while Beren did his work. Things got hairy, though, when Beren’s knife broke and cut Melkor’s cheek. He woke up, and was… let’s just say he was miffed.

In their escape, Beren was confronted by a giant werewolf named Carcharoth, who bit off and swallowed Beren’s hand that held the Silmaril. Beren and Luthien returned to her home without the Silmaril, but Thingol’s heart was softened by their story and how much they went through together, and he allowed them to marry.

Their happiness was short-lived, however. The werewolf, Carcharoth, came to Thingol’s kingdom and caused destruction, so Beren and his trusty dog Huan (think Falkor from Neverending Story…) went out to find and kill him. They were both wounded to death, but before he died, Beren was able to take the Silmaril from Carcharoth’s belly and give it to Thingol, thus fulfilling his oath.

Mandos was moved to pity (for the first and only time, apparently!) and gave Luthien a choice – she could dwell in bliss in the elvish afterlife, or be restored to life along with Beren, but both be mortal and die the death of men in the course of time. Out of her love for Beren, Luthien chose for them to live again. They lived the rest of their lives together and were happy.

So Why Does it Matter?
Well, two reasons… Number one: 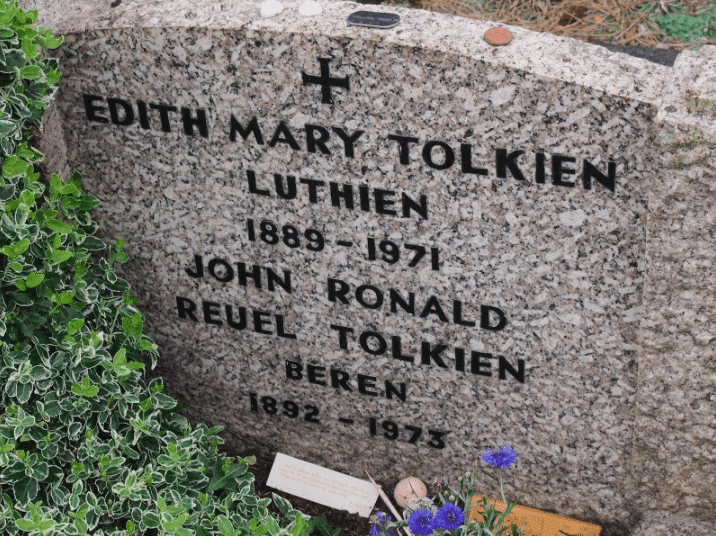 Yeah, that’s right. The characters of Beren and Luthien were inspired by Tolkien and his wife Edith. According to family history, Edith’s family was initially cold towards Tolkien (like Luthien’s family was to Beren), and the overall story and characters reflect the love that they shared for one another. The story was important enough to them to be buried under those names, and it was important enough for Tolkien to spend a good portion of his life working on a massive epic poem of the story, which he never finished. So I’d say it’s pretty important.

And number two: The tale of Beren and Luthien closely mirrors a more famous story from Tolkien’s works – that of Aragorn, the brave and noble man and future king, and Arwen, the daughter of an Elf king and most beautiful elf maiden since Luthien.

The relationship between Aragorn and Arwen is not exactly central to Lord of the Rings, but it is a very important part of who Aragorn is as a man. Their relationship frames a lot of Aragorn’s motivation, which is also a pretty important thing to a story.

Further, both Aragorn and Arwen are keenly aware that their love and eventual marriage are exceedingly rare, having only occurred twice before in the entire history of their races (the other was Tuor and Idril, also in the First Age).

The Glass Cannon Podcast: Episode 60 – Silence of the BLAMs