The Incredible Hulk was created like much of the characters of his era, a side effect of a nuclear weapon, where radiation unleashes the inner rage of scientist Bruce Banner.

But if a new or new(ish) comic reader would want to get a handle on the modern day Incredible Hulk, and Bruce Banner in particular, there is no better place to start than the Planet Hulk saga, written by Greg Pak and found in Incredible Hulk #92-105 and Giant Size Hulk #1.

New to Comics? A quick synopsis of Planet Hulk. 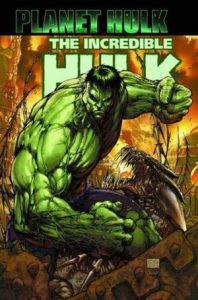 The genesis of the Planet Hulk story extended out of the discussions around the what I guess we know have to call the first Marvel Civil War plot. Over and over again, they kept running into the problem that the Hulk and all of his power would throw the balance so off-kilter that whatever side he was on would win. So Marvel hatched a plan to have the Hulk have a separate storyline that would pull him away from Earth to allow them to write an Earth-bound story without his influence.

In continuity, the Illuminati–the cabal of leadership of the Marvel Universe–decided that the Hulk was too powerful and tricked him into entering orbit. The shuttle he was on was sent into space, where it hit a wormhole and Hulk winds up on a planet that forced him to become a warrior in gladiatorial games. Eventually, the Hulk returns to Earth to wreak havoc on the Marvel Universe as he is unhappy with what happened.

So why is Planet Hulk a good place to start?

To me, the Incredible Hulk is a constant battle between the person of Bruce Banner and the darker side of “monster,” the Hulk. And in this storyline, the humanity of Banner is pushed far down and the warrior Hulk rises to the top. In the hostile environment of this new world, Banner needs the Hulk to keep them alive and to be the monster, winning in the gladiator arena and in the world.

Second, a lot of modern comics get sidelined by the crossovers that suddenly have to spring up and tie-in to whatever the current Marvel story is. Because of the nature of what happened with the Hulk, essentially banishing him from the Marvel universe, it allows this story to breath and grow in a way that is pretty rare nowadays.

Third, Planet Hulk is an homage to old school science fiction. With this all new world, the warriors and gladiatorial arena, this series respects and pays tribute to books like Edgar Rice Burroughs’ John Carter series and others. In a time when Pak could have easily claimed existing worlds and alien races, his choice to go and create new things is a master stroke. Hulk fighting the Kree or the Skrull isn’t as intriguing. But there is a surprise connection to the cosmic Marvel universe that is satisfying and pits Hulk against another Marvel icon. 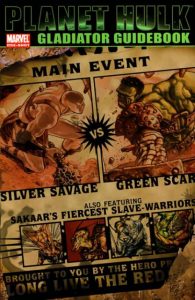 Planet Hulk also introduces some really great characters as well. The Warbound are Hulk’s allies from the arena, where they have pledged themselves to each other. Out of a “What if?” title and later brought into canon, Hulk’s son Skaar is a significant addition to the Marvel Universe, that could be one of the more powerful and interesting characters in the years to come.

Finally, if the rumors are to be believed Planet Hulk may play a significant part of the Marvel Cinematic Universe. One of the challenges of an Incredible Hulk movie is that you have the constant shift between Banner and the Hulk. The rumors are that Planet Hulk has been developed as a potential Hulk standalone movie; the end of the Age of Ultron certainly hints of a turn that could go in that direction. With the promise that Mark Ruffalo and the Hulk are scheduled to appear in Thor: Ragnarok, some thought has been given that this story could be a part of it as well, as it would work with Thor and Hulk both being off-Earth, as seen in the recent Captain America: Civil War story.

So, if you want to see some modern story with the Incredible Hulk that works well and is a standalone story, you can’t go wrong with Planet Hulk and the story that stems out of it. Planet Hulk is collected in a great single volume that can be had for a nice price. Find it here.

7 Iconic Marvel Cosmic Stories that You NEED to Read