One of the greatest and most famous characters in J.R.R. Tolkien’s Lord of the Rings is Aragorn, a.k.a. Strider the Ranger, a.k.a. The Heir of Isildur and rightful King of Gondor. At the very center of the lore and culture of Middle Earth is the idea that there should be a good king on the throne in Gondor, a descendant of ancient Numenor who is tall and strong and wise and gentle. But to the uninitiated, i.e. those who haven’t read Tolkien’s masterwork The Silmarillion, the question of who or what, exactly, Numenor is can be a puzzling one. Let’s talk about that…

The First Age of Middle Earth spans everything from creation until the fall of Morgoth, the OG dark lord. He wanted to have sole control over Middle Earth and the Undying Lands. The other Valar, of course, wanted things to happen according to the will of Eru (the God-character in Tolkien’s mythology). There were many ebbs and flows in the battle between the two sides, ending with the War of Wrath, the casting out of Melkor, and the reshaping of Middle Earth. 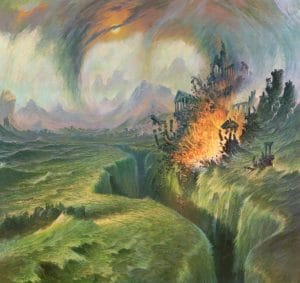 The largest of those islands was called Numenor, and as a payment for the sacrifice that the greatest races of Men had endured during the First Age, they were allowed to move there. They were also given extremely long lives, great knowledge and skill, and the whole island was moved to just outside sight of Aman, the Undying Lands where the Valar lived.

This heralded the start of…

The Second Age of Middle Earth, somewhat surprisingly, doesn’t take place in Middle Earth very often. The story shifts to Numenor and the greatest of the descendents of the Edain. They became accomplished mariners, sailing back east to explore the newly reshaped Middle Earth and establishing settlements there. They sailed west as far as they were allowed – the only limitation imposed on them by the Valar was that Mankind was not allowed to sail so far westward that they couldn’t see Numenor, for fear that they would come to Aman and receive unending life. The men of Numenor became wise and knowledgeable and powerful beyond any kingdom of Men before or after. 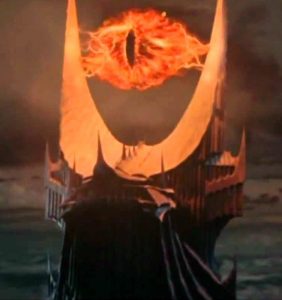 It was during this rise of Numenor that Sauron made his first play for dominance of Middle Earth. At the
end of the first millennium of the Second Age, he founded Barad-dur, the very same tower that his evil eye resides in in Lord of the Rings. As Sauron was growing in power and evil, the men of Numenor were establishing their first outposts and havens in Middle Earth. It is during this period that Sauron forged the Rings of Power, including the One Ring. Eventually the Elves of Middle Earth fought against Sauron, who narrowly escaped back to Mordor, vowing vengeance on Numenor for the part they played in his downfall.

Unfortunately for the people of Numenor, as the power and majesty of their kings grew, so did their arrogance and petulance. During the years between the war with Sauron and the reign of the king Ar-Pharazon, the leaders of Numenor began to covet greater and greater glory at the expense of their wisdom and prudence. They grew envious of the Elves and their immortality, began to rule their kingdoms in Middle Earth as cruel tyrants instead of benevolent kings, and revived ancient religious practices that were despicable to the Valar.

Eventually the wicked king Ar-Pharazon sailed to Middle Earth with a force to fight Sauron again. When they landed at Umbar, though, Sauron surrendered without resistance and, in one of the most inexplicable decisions ever made, Ar-Pharazon brought Sauron back to Numenor as a prisoner. Even more confounding, it wasn’t long at all before Sauron had become a trusted advisor to the king. Predictably, Sauron turned the king and those who followed him to worship Melkor, trading human sacrifice for immortality. Not necessarily worse, but on par in the Middle Earth scheme of things, Sauron convinced Ar-Pharazon to cut down the white tree Nimloth (a descendent tree from Telperion, one of the Great Trees in Valinor that Melkor and Ungoliant destroyed) and burned it as a sacrifice to Melkor.

Eventually Ar-Pharazon began to fear death, and assembled a tremendous armada to sail west to Aman and demand immortality from the Valar. Predictably, this did not end well. Not only did the Valar rise up in power to destroy Ar-Pharazon’s fleet of ships, they completely destroyed the island of Numenor itself in a great cataclysm. The Valar also bent the shape of the world so that no one could ever sail to Aman again, except for the Elves making their last journey. Thus ended Numenor. Except…

At great personal risk to themselves, Isildur and his family, and a smallish number of like-minded people, sailed east towards their kingdoms in Middle Earth, bringing a fruit from Nimloth in order to preserve its lineage. This heroic act saved the line of the trees which would become the White Tree of Gondor – a tree that was forever tied to the line of kings. Arriving in Middle Earth, they established the great kingdoms of Men in Middle Earth, Arnor in the north and Gondor in the south.

About 100 years later, Sauron, having narrowly escaped the destruction of Numenor (dang, that guy is hard to kill!) had gathered evil forces to himself again and made war on Men and Elves in Middle Earth. This became known as the War of the Last Alliance, which ended with Isildur cutting the One Ring from Sauron’s hand. From there, the story is fairly well-known to anyone who has read or seen Lord of the Rings. Isildur was weak and didn’t destroy the Ring, the Ring betrayed him to his death, and the kingdoms of Arnor and Gondor continued, though greatly diminished over time.

The remnants of the people of Numenor in Middle Earth became scattered into smallish bands throughout the north, the former kingdom of Arnor. These wandering bands of Men became known as the Dunedain, which means “Men of the west,” or colloquially as “Rangers.” Throughout the first three millennia of the Third Age, they maintained their lore and culture, as well as the bloodline of Isildur and Anarion, the sons of Elendil who founded Arnor and Gondor.

A New Perspective on Aragorn

And, of course, that brings us back to Aragorn, son of Arathorn, King of Gondor, the last great kingdom of Men in Middle Earth. Numenor and its history are tremendously important in the sense that they provide the context for Aragorn’s motivation and character. He is the last remnant of the Numenorians who remained faithful to the Valar and in friendship with the Elves. The great evils of Middle Earth – Morgoth in the First Age and Sauron in the Second and Third Ages – had only ever been defeated when Men and Elves (and Dwarves, too) united to fight them. Only someone with Aragorn’s perspective on the history of his people, their glories and their failures, as well as his connection to the Elves, could become the king Gondor needed.

*Side note: No offense to Elves, but it seems pretty clear from The Silmarillion that Mankind are kind of Illuvatar’s favorites. Hey, Tolkien was only human, right? So having a great kingdom of Men on earth, led by a king who is kind, wise, just, and merciful, comes across as just “the way things are supposed to be” somehow. Almost as if having that sort of king and that sort of kingdom are what allows everything else to function as intended.