We’re in the midst of a gaming renaissance, nerds. The water is warm. You need to hop on the bandwagon. Time to get in on the action. Yada yada yada.

But what if you are board game curious, yet don’t know where to begin? Well, here are 7 great hobby board games to get you going. Warning, these games will mark the start of your next obsession.

Starting a Board Game Collection

Settlers of Catan is the game that will have you have you trading sheep for wood. What Monopoply was to yesteryear, Catan is to our time.

Catan is the gateway game that has introduced most of blue state America to European-style board games. (Learn more about Euro games and Catan.)

In Catan, you’ll gather resources that allow you to build roads and cities, then trade for the resources you lack. In re-reading that sentence, I realize that sounded boring, but it’s not. Catan really is a great game to get you started.

Pandemic is what’s called a co-op game. Pandemic has you take on the role of CDC workers, trotting around the globe knocking disease cubes to prevent a global catastrophe. Pandemic popularized the cooperative board game, meaning you don’t compete with your teammates, you work together.

Pandemic is a clean, elegant game and one that is perfect to add to your collection, being that it rewards cooperation instead of competition. 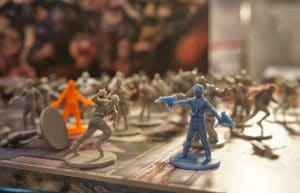 Zombicide is nothing but big, dumb fun. Few games go better with beer than Zombicide, and there isn’t a game that has a better horde of cool miniatures.

In Zombicide you pick play survivors who are working against a legion of the undead. It’s pulpy fun. We’ve done a full review, but trust us when we say you’ll get lots of hoots and hollers from Zombicide.

Dominion is the granddaddy of what are called deck builders. You start out with a small hand of cards and limited actions. Turn by turn you add cards and your actions increase.

Dominon is chill, yet still thoughtful. It works great as a two player game, so it makes for a nice, quiet date night at home. It also has loads of expansions, and while there are flashier games that exist, you’d be hard pressed to find a game that is more universally appreciated than Dominion.

Betrayal on the House on the Hill is a complete left turn from Dominion. Choosing an adventurer, you build a mansion room-by-room, encountering all sorts of creepy, menacing interruptions. But when a certain action is triggered, the players go from co-operating, to fighting for their survival, as one player becomes a traitor!

Betrayal is great fun. It’s a got a spooky theme, and it packs a lot of tension as you await which player ultimately becomes the betrayer. It’s been one of the hottest games last year, and an expansion is coming soon. Get it here. 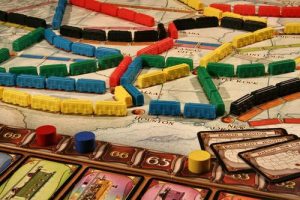 Ticket to Ride is a game about laying rails. Players get cards that list geographic train routes, then race the other players to collect the colored train cars that allow them to complete the routes.

I’ve never a met a human that didn’t enjoy the game. Everyone from grandpas to older kids enjoy playing, so it’s worth a purchase if just to have something to do after thanksgiving dinner. You can get it here. 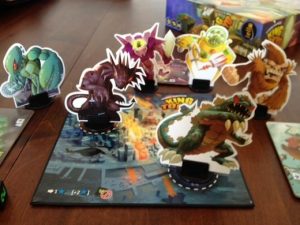 King of Tokyo pits monster against monster. Players select iconic baddies like King Kong and Godzilla, then battle it out to be “king.”

It’s a relatively simple game, yet it packs a lot of fun. It’s also a game that kids can pick up and play as well, making it a nice family game. You can pick it up here.

Which titles would you recommend to new collectors?  Drop in to our Boarderlands Facebook Group, which is a dedicated space for all things tabletop, and let us know!