Nerd Culture Highlights for the Week of September 11, 2016 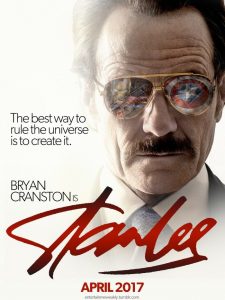 1. There’s a Stan Lee action-adventure movie in the works at Fox.

If it will be as its described in this post (“a film in the ‘tone of Kingsman: The Secret Service or, as one insider put it, Roger Moore’s 007“‘), it could be pretty interesting and fun.  And I’m a pretty big fan of the parody poster depicting Bryan Cranston as Lee; particularly that tagline!  I’d watch that.

It is on the nose, as usual.  The parallels drawn between BvS (which we Earth Nerds almost unanimously disliked) and Civil War (which I’m pretty sure we all love) are particularly funny!

I love, love, LOVE Timothy Vahn’s Thrawn Trilogy. They are still my favorite Star Wars novels of all time, and that is due in large part to Thrawn. He’s such a menacing and interesting baddie! I don’t think I’ve seen a single episode of Rebels myself, but I may well pick up at the start of Season Three solely because Thrawn is in it.

Don’t know who Thrawn is or why everyone is so psyched about this news?  Go and read the Thrawn Trilogy now!  It is officially NoE required reading.

4.  Here’s a video of a longbow taking a shot at a breastplate.  Who wins?

This video popped up in a DnD Facebook group I’m in.  Comments quickly racked up in which folks were complaining about misuse of the longbow in the test – i.e. longbows were used a significantly greater range than shown and rained down from above, often bypassing the breastplate to strike the head or neck blah blah blah.

When I pointed out that those same people complaining about the misuse of the longbow used that weapon in the exact same manner as depicted in their own DnD games, they came to appreciate it and made jokes about how the bowman didn’t make an attack roll higher than the AC of the breastplate.

Great out-of-game references to in-game mechanics ensued and fun was had by all.

5.  Here’s a “Pay What You Want” fillable character sheet for DnD with a few bells and whistles. 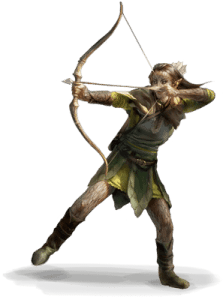 We here at Nerds on Earth love Hero Lab.  Like a lot, you guys.  But not everyone plays as much as we do or is as quick as we were to drop $30 on the D&D license, and we get that.  User morepurplemorebetter uploaded a character sheet that you can download for whatever price you deem fair (average donation is currently $1.75) that might do you some good.

It comes loaded with the contents of the Player’s Handbook, Elemental Evil Player’s Companion (which is available entirely free here), Sword Coast Adventurer’s Guide, and Curse of Strahd data, so if you choose any race, class, background, feat, etc that is contained within those pages, the sheet will auto-populate the appropriate ability scores, proficiencies, etc.

It does require Adobe Acrobat XI or DC to function, which means you’re not going to be able to interact with/edit the sheet on your iPad during play (like you can with Hero Lab), but it does produce printer friendly exports.

A couple bucks for all the information in four source books?  At least worth a try!

We’ll see you next Friday for five more nerd culture links. Until then, feel free to share a highlight in the comments if we missed something.

What’s Behind the Incredible Popularity of Watching Others Play D&D?

Being a Nerd Dad: Family Movie Night with Nocturna