By Will Sansbury On Sep 3, 2016 Last updated Aug 29, 2016
Share TwitterReddItPinterestFacebookEmailPrint

When it comes to board games, our family has tended to be traditionalists; if Milton or Bradley were involved in making it, we probably own it. When my wife won a sci-fi/fantasy gift basket at the local library, it included a game that took us off the well worn path of UNO and Sorry to find more interesting, decidedly more geeky options.

That game was Castle Panic, and it’s become a family favorite.

All About Castle Panic (or, as we call it: Panic! At the Castle) 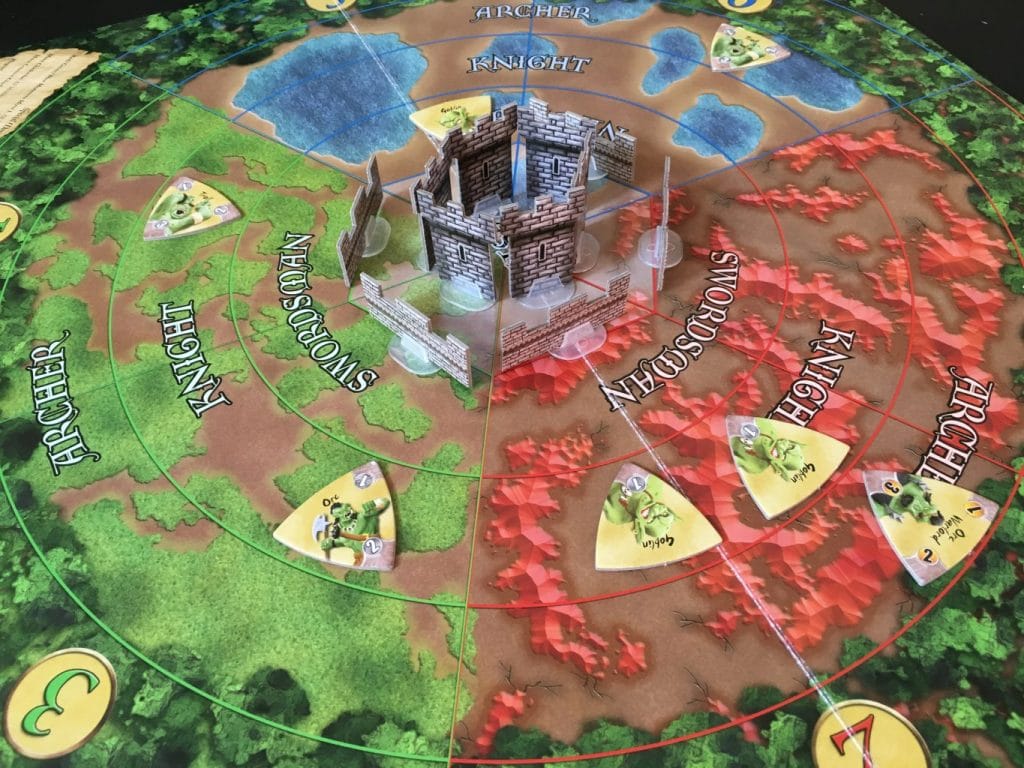 Castle Panic was created by Justin De Witt and is published by Fireside Games. It can be played by as few as one and as many as six, and a typical game lasts between 45 and 60 minutes. The publisher states that the game is good for ages ten and up, but our five and eight year olds have both enjoyed it (since we play in the default cooperative mode, it’s easy enough to help them understand the bits they might miss on their own).

Castle Panic will set you back about $20 from Amazon.

The goal of Castle Panic is simple. Together with the other players, you’re the protectors of a castle that resides in at the center of the board. The board is ringed by dense woods infested with orcs and trolls who want to destroy your castle. (Side note: building a castle where you can easily be surrounded and attacked is extremely questionable strategy. Can we get a mountain or a cliff or some water on one side, please? But for the sake of Family Game Night, we’ll chalk that up to willful suspension of disbelief.)

Sandwiched between the castle and the dense woods are several attack zones that represent the types of attacks that can reach enemies in that zone: Swordsman is closest to the castle, followed by Knight and then Archer. 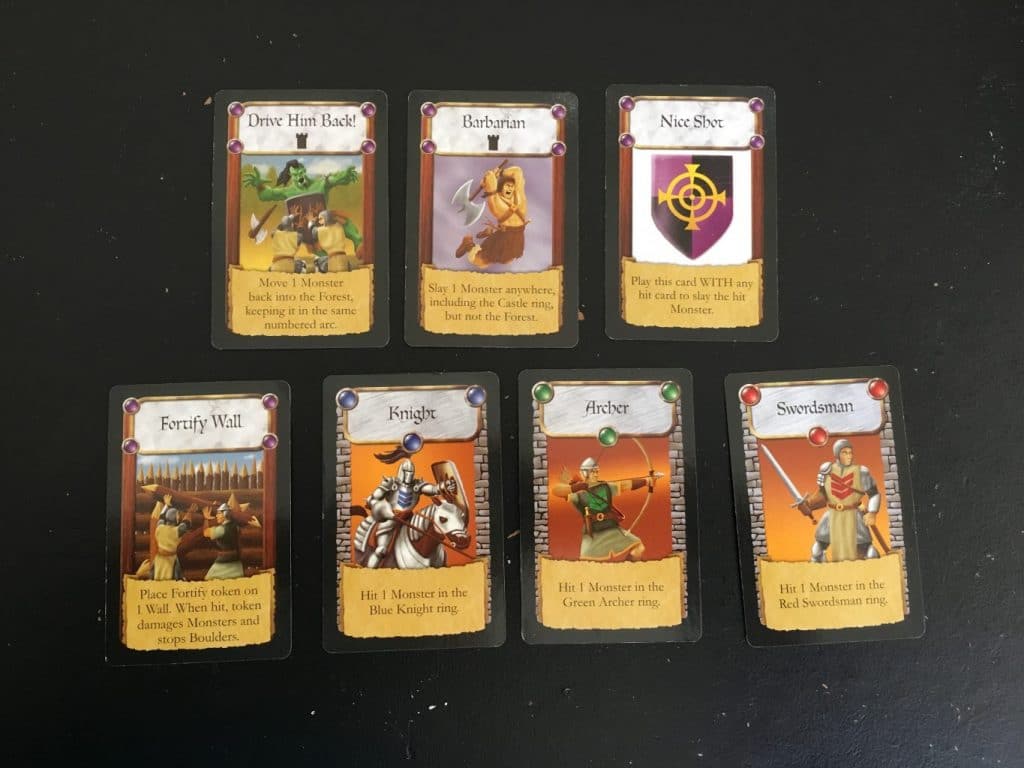 (Forgive the state of our game table. It’s in desperate need of a fresh coat of chalkboard paint.)

Each player controls some of the castle’s defenses, which are depicted on a deck of cards dealt to the players. These include common defenders like “Red Knight,” who can attack any enemy in the Knight ring of the Red section of the board. They also include several heroic defenders, such as the Barbarian, who can kill any enemy, anywhere on the board, in one hit. 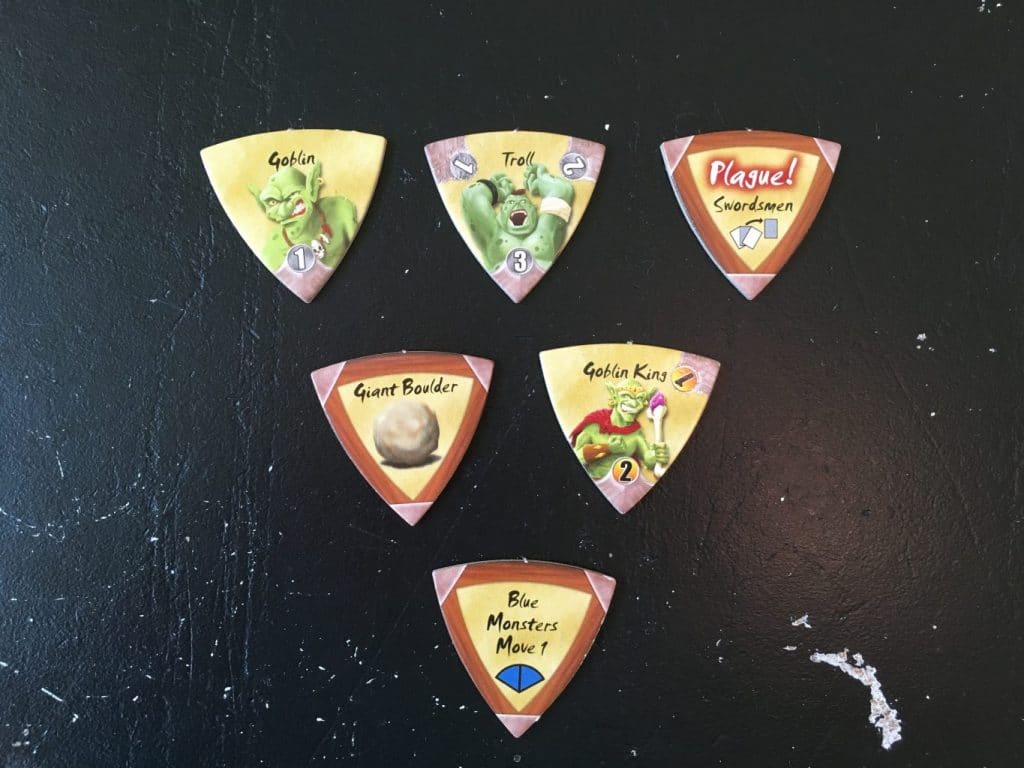 Enemies are placed on the board at random each round. Each player draws three tiles from the bag of enemy forces. Like the defending cards, the attacking tiles are sometimes mundane (orc or troll) and sometimes more spectacular (like boss-level bad guys or, my five year old’s favorite, giant boulders that roll through a section of the map, indiscriminately flattening friend and foe before crashing into the castle walls).

With each tile drawn, the player rolls a die and places that tile in the corresponding section of the board. Since this is done every round, it gives the game a great sense of suspense and surprise. Each round carries with it the chance for the tide to turn completely.

Too Much Left to Chance?

Some folks might say that Castle Panic is driven too much by luck. They’re not wrong. With the forces each player controls and when and where the enemies will attack all being driven by chance, the importance of strategy and tactics are diminished in Castle Panic. If I were playing with my buddies, this would bother me more, but when my band of castle defenders are a five year old, an eight year old, and a twelve year old, the chance mechanics introduce just enough chaos to level the playing field and keep everyone on the edge of their seat.

What the Kids Say about Castle Panic

S, my twelve-year-old daughter, says: “It’s a fun game to play with family or friends, and it’s easy to learn. It’s extremely cool!”

L, my eight-year-old daughter, says: “Be careful of the plagues—they can kill ALL of your archers!”

E, my five-year-old son, says: “Do more giant boulders! They squish all the monsters!”

What Are YOU Playing?

Our unexpected foray into less common board games has been a lot of fun, and Castle Panic is sure to be a Family Game Night favorite for a long time to come. But we’d love to hear from you! What other nerdy additions should we make to the Family Game Night rotation? What board games are you playing with your family?

What We’re Reading At Nerds on Earth: A Glimpse At Our Nightstands