Hello Lego fans! It has been a while since our last Lego review, but I have another one for you all today, and it’s a doozy!!  I recently landed Star Wars Lego set #7754, or the “Home One Mon Calamari Cruiser” set.  Also known as the, “IT’S A TRAP!” set.  This is a Lego exclusive offering and pretty hard to come by, and how I came about mine is none of your business. Just sit back and enjoy the review!

Star Wars Lego set #7754 is a 789 piece set with 6 very exclusive minifigures and LOTS of moving parts! The minifigures that come with the set are:

The set itself is actually two sections of the cruiser that can be attached or detached for display purposes. You have the ship hanger where the A–Wing fighter can be stored and the war room from which the battle is commanded.  Really, the set should have been called “Home One Mon Calarmari Bridge and Hanger.” But hey, I don’t name the sets, I just review them. 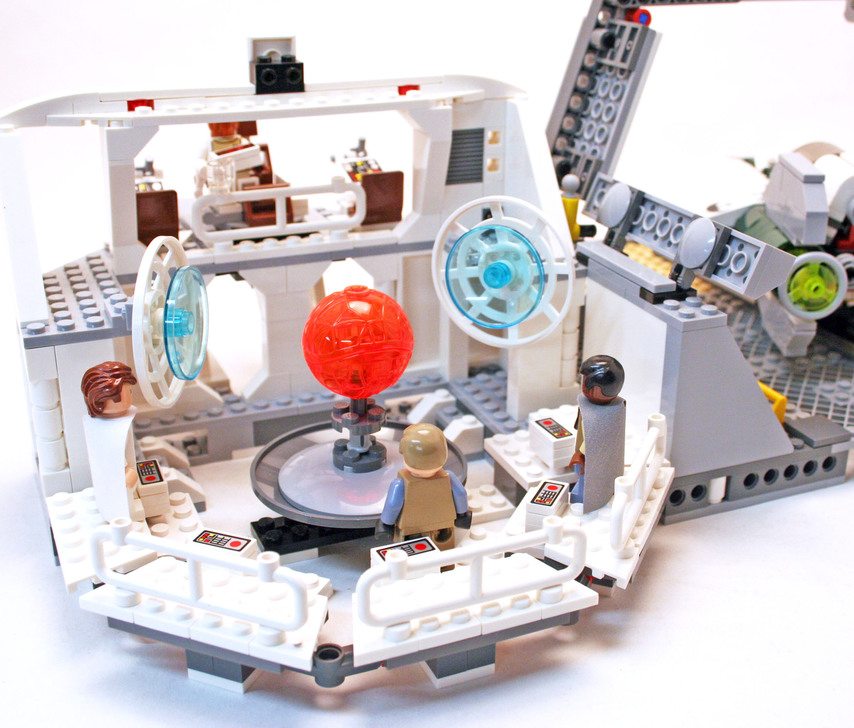 At first glance the ship hanger looks bare bones as a structure, but I assure you it is not lacking in playability! There are two floor compartments for storage (extra tools, guns, what have you), a hanging crane with nozzle to attach to said A–Wing for repair purposes, as well as some movable flaps and ladder pieces for effect.

However, the coolest feature of this hanger is the landing area for the A – Wing fighter ship. You actually place the ship onto a holding piece that can rotate with the twist of a nob. That same nob also slides the ship into place at bay in the hanger. It is a fine piece of Lego engineering to say the least.

As cool as the hanger is, it still may be out done by the war room area where we have the famed line “It’s a trap!” A classic Star Wars moment!

The war room has a circular design to it that is held together by interlocking elbow pieces. It also has at the center the Death Star schematic read out and plenty of space for additional minifigures to be placed. Above the war room is the command bridge where Admiral Akbar sits in a chair which rotates and slides JUST LIKE THE PIECE IN THE SHIP HANGER!!

I told you the bridge and war room were not to be out done. There are also two computer consoles at the right and left of Akbar to be manned by extra mini figures you might have lying around. 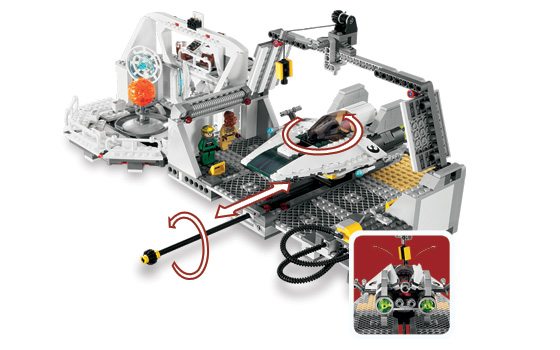 Last but not least is the A–Wing fighter. It is a very sleek and speedily built ship with two flick fire torpedoes. It is just the right size to fit the hanger and make a full rotation on the spinning contraption.  It also has a detachable engine piece for repair action!

While this certainly takes a bit of a back seat to the amazing hanger and bridge war room portions, the A–Wing is really just the icing on the cake for this set, so you have to be pretty pleased with the ship as such!

Overall this set is so fun to build, display, and play with. However, at the price you are going to pay—currently trending around $110 – $140 NEW—it is a bit pricey.  For the price, it probably could have used a few more minifigures (even just generic ones to man the computer consoles would have been nice), but all in all it is a terrific set.

Now I would not recommend this for anyone but the serious collector as they would be the types to truly appreciate it. So if you have a serious collector at home, and you want to surprise them, start looking now for Star Wars Lego set #7754!