Adkins Previously at Nerds on Earth:

And now me, Nash, and Joseph, in the spirit of Halloween, are going to share our most beloved and hated horror movie tropes.  Let’s start with the bad and end with the good shall we, fellas?

Nash Well, horror isn’t particularly my go to movie genre, mostly because of the blood and gore. So I guess I would go with backwoods mutant/freak people, as those tend to be the most graphic horror flicks I’ve sat through.

Adkins So I kinda think those could actually be two different tropes there, Nash: 1) Backwoods people and 2) mutants/freaks. But they definitely show up together a lot.

Is there any reason (besides graphic violence because…you know…horror movies) that you dislike that particular angle?

Joseph That actually brings up kind of a good point, Adkins… Can we define “horror” and “trope” quickly, for our benefit and the benefit of our readers?

Adkins Ah, yes. So a trope is a reoccurring theme or motif – the Damsel in Distress, for example.

Horror is tougher to define as it is super subjective, but I’d be willing to define it as anything that is intended to scare you. I think the intention is key as some folks might be afraid of clowns and therefore think McDonald’s commercials qualify as horror.

Joseph Got it. Just wanted to make sure we’re all speaking the same language when we use those words. Please continue, Nash.

Nash I honestly think that any tropes that define people of a specific region, ethnicity, or culture are pretty tired tropes. Like I get it, backwoods people can be weird, but we have seen them be REALLY weird for a long time and it only gets weirder and weirder.

Joseph I agree, man. We’ve seen so many redneck murderer movies, that it seems like all they can do is make them gorier and gorier.

Adkins So drop an example on me, guys. Where have you seen this trope at work? 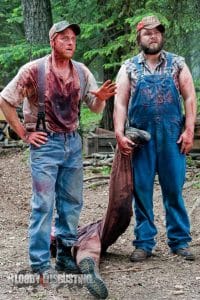 To flip this trope on its head, watch Tucker and Dale Versus Evil. Totally subverts this trope and it is glorious.

Joseph Yes! That is one of my favorite movies in the “horror(?)” genre, along with Shaun of the Dead.

Adkins What about you, Joseph?  What tope grinds your gears?

These are most embodied by the Saw movies, to me. The antagonist in those movies thinks up the most complicated, messed up situations to put his victims in. Even the conceit of having them kill themselves, technically… I just don’t get it, and I don’t see the value in it.

Adkins See, I had Jigsaw in my Top 7 Horror Villains because of his twisted benevolence motive.

Not a fan of the movies per se, but that struck me as an intriguing angle.

Joseph Yeah, I guess… I’m just not a fan. And the farther into that series we got, the less the motive mattered. The first movie was unique and interesting, but after that it lost me.

Adkins Now THAT is absolutely true. The motive gets buried under streams of Rube Goldberg death machines.

Nash I have not seen any of the Saw movies, but one I did like was Se7en…though I could only watch it the one time. To me they seemed somewhat similar before this conversation but maybe not so much…?

Joseph Somewhat. Se7en was more about the psychological games that Kevin Spacey’s character played with Brad Pitt’s character, as well as the statement about human nature that it made. 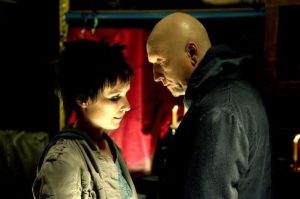 The first Saw had a lot of that, but like Adkins said, it got buried under clever inventions and gore in later movies.

Nash Yeah, I doubt they could have strung together a few movies after Se7en that would have struck the same chord as the first…

Joseph What about you, Adkins? What’s your least favorite horror trope?

Adkins There are so many that drive me crazy, but somewhere near the top of that list is the one that dictates that whoever is in danger chooses to stick around where ever the horror is taking place. Like, they don’t just leave.

Nash That’s funny, because I am a sucker for a haunted house trope! lol

Joseph That, in all it’s many variations, yes…

Adkins Murdery stuff is happening at that cabin in the woods? Leave.

Adkins Just once I’d like to watch a movie where one character is just like, “I’m out,” as soon as the scary stuff happens. For the rest of the movie you’re sitting around wondering what happened to him as you watch everyone else die. Post credit scene: He went home and is binge watching Cage.

Let’s each share a trope that we secretly love. I think Nash has already made his known! 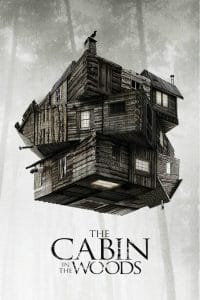 I think the best example of this The Cabin in the Woods.

Adkins Absolutely, and it does so perfectly, and I’ll fight anyone who thinks otherwise.

Nash I love Hot Fuzz, haven’t seen many other anti-tropes.

Adkins For me its the one that TVtropes.org calls “Curiosity Killed the Cast.”

Joseph How does that one work, Adkins?

Nash Sounds like a whole bunch of people not leaving to me…!

Adkins You’ve seen it a thousand times: Someone (or maybe even everyone) investigates the noise or opens the door or reads from the book that you shouldn’t. Curiosity is a powerful force!

This trope, I feel, is responsible for 98.6% of people shouting “Don’t do it!” in the middle of a horror movie.

Joseph So, to echo Nash’s comment above, how is that different than people not leaving where the horror-y things are happening?

Until you know the facts, what reason is there to run? You don’t really have one.  But once you know what’s going on, its time to go. It is the quintessential “NOPE” moment.

“You mean to tell me that that doll is sentient and has a knife? NOPE. I’m out.”

Joseph Got it. So in The Cabin in the Woods, for instance, you love that they go into the basement and play with stuff, but hate it when they don’t immediately get out of there when the (surprise!) redneck murderers show up?

Adkins Exactly, Joseph. Heck, I’d have played around with a few things in that basement. Only difference is they couldn’t leave because Cabin in the Woods is the greatest and they thought of how to make sense of my least favorite trope of all time.

Joseph Exactly. Nash, I know you don’t watch a ton of horror movies, but you should definitely watch that one.

Adkins So what I’m hearing is the three of us saying “Go watch Cabin in the Woods and Tucker and Dale Vs Evil.” Am I mishearing that?

Joseph Those two are, by far, my two favorite trope-killer horror movies.

Adkins You heard it here, folks. NoE official required viewing! Get to it.

Recap and Review of Agents of SHIELD Episode 405: Lockdown