Recap and Review of Agents of SHIELD Episode 405: Lockdown

After last week’s revelation about Uncle Eli and his involvement in the experiment gone wrong, are we going to see the new bonds between SHIELD and Ghost Rider and Daisy tested? This week is Agents of SHIELD episode 405: Lockdown. 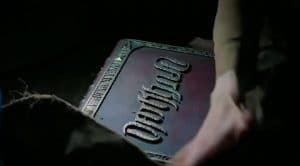 Young Lucy and her husband are digging in a basement when they discover the Darkhold, and it has some unusual properties–most notably, that they see whatever they need in their original language.

As Lucy puts it, the book reads you. It is an appropriate level of scary as they cut away.

On the SHIELD mobile headquarters, we have all the parts working out:

After visiting the no longer comatose husband, who had been infected, they head out, with Fitz having concocted a formula to free them from demon possession, because, you know, science!

When they arrive at the prison where Uncle Eli is a guest, they break into 2 teams, with Daisy who heads to free Coulson and May from infected warden. That teams winds up going one way and Mack, Shotgun Axe, and Robbie going the other.

Mack is worried that Robbie will not be able to control himself, with all the people in need of punishment in the prison. Robbie assures him that he will, if for no other reason than he doesn’t want his uncle to see him this way. And he proves it when he sees a member of the gang that hurt his brother and is able to walk away….for now. 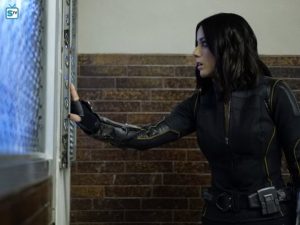 Daisy, Coulson, and May discover that they are using prisons to recruit new Watchdogs, which turns out to be a problem when the Ghost Lucy releases all of the cell doors. It turns out to be even more of a problem when they get to the cafeteria, where we discover that all the men in their cells have learned parkour, which makes sense. What else are you going to do in jail?

Daisy tries to be the hero, only to wind up stuck in a bad situation, where Coulson and May bail her out.

Robbie and Mack free Uncle Eli and are headed to safety. Mack stops to help some guards and Eli can’t quite get over the prisoner he saw before. He finds out the attack on him and his brother was a hit and then burns the prisoner in full Ghost Rider mode. His uncle was captured by Lucy before he got to SHIELD and we see Lucy and Eli back in the lab, with the uncle reading the book, because we learned earlier, Ghost Lucy can’t read it, for whatever reason.

Interspersed during all of this, Simmons and the new Director have a few moments. Simmons fails her lie detector and he recruits her to help him in a live interview, where she feeds him information in a debate against the senator we met last week. They do fine and at the end, the Director reveals that he is an Inhuman. Only, Simmons figures out that his story doesn’t wash and uses it as leverage to get herself off the lie detector list.

And later, we see the Director and the Senator in a shady exchange in the back of an SUV.

A solid 8 out of 10. We haven’t seen a great episode this year but we also haven’t had a dud either. Pretty good track record for season 4 so far!