Fantasy Flight Games has held the license to make Star Wars related games for tabletop, role playing games, and card and dice mechanics. And they have made some stellar games that deserve lots of accolades. Their endeavor in the role playing genre is the Star Wars Edge of Empire RPG. 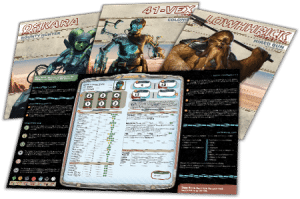 First off, the Game Core Rulebook is spectacularly put together. It is a full color expansive work that is well laid out and the art is magnificent across all 440+ pages. It does a great job of explaining the game mechanics, the setting and the general rules and gameplay explanations that are needed.

The Game Master’s Kit is also a nice piece with a nice screen, a solid first adventure and some tips for game mastering. They are really well made and top of the line products that do well to explain this game and its universe. And there are 3 parts of the game that are very good.

1. The Setting. Think of the setting of the game as being Firefly meets Star Wars. Your adventuring crew is existing on the Outer Rim of the Star Wars universe, seeking adventure, fortune and maybe aiding the struggling but insistent Rebel Alliance. That dynamic is really smart for a Star Wars RPG.

It would be really tempting to jump to the mystic jedis and get intertwined with the Skywalker Saga. The choice to set adventures in the far edges of that universe lend for some stellar stories and characters. It could be seen as a small choice but it is a massive one and actually makes the game very intriguing. 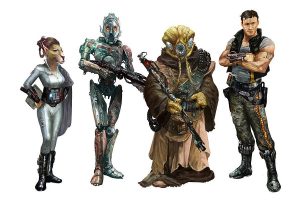 2. The Character Creation. The character creation dynamic for this game is really interesting. You work through a character background and then add in what the game calls an obligation.

These obligations have the effect of giving your character some diversity in their background; also, your team has to have a minimum obligation level. It is a dynamic that can bring some great roleplaying to the stories your team is telling and I can’t remember seeing a dynamic like it in another game.

The game has 8 different races at the base of the game and each has various abilities and skills. The next step adds career and specializations and is where the character creation process expands out into a wide variety of roles. Each career has a specialization tree that means there can be a ton of diversity in player characters.

There is even more to the character creation process but overall, it feels like it would be a fun process to shape your playable character into something that you’d like to run.

3. Spaceships. Again, like the character creation piece, there is a process for building your various different kinds of spacecraft. What is less obvious is how that process will impact game play. Sure, who doesn’t want to build out the rival to the Millennium Falcon? But how that impacts game play seems to be far less clear than how character creation does. That said, it is a fun dynamic to use and invest some time in playing around with the different options.

The weakness of the game is that it struggles from 2 different parts: a complicated game mechanic and the related dice that are needed. (Or the $5 app that is available on most platforms.) If you are used to a simple RPG mechanic that is generally set up with one die, add adjustments and determine success, this system is much more complicated.

Every action or feat is going to a combination of different kinds of dice depending on the challenge level, skills, attributes and other factors. Then a roll occurs and a result is determined. If this dynamic were simply using existing dice and numeric results, it could likely be easily learned. The issue is that Fantasy Flight is using the game as an opportunity to sell another set of dice that have different faces.

To be fair, there is a chart to convert your existing dice to their system but it is complicated enough that no one is easily going to convert to the point of never needing a chart. The dice set is available to be purchased and it doesn’t come with the core game rulebook, which is expansive or the Game Master’s Kit. But one does come with the Edge of Empire Beginner Game kit.

Overall, the Core Rulebook and the Game Master’s Kit are interesting investments; there is no way to get the most of out of the game without them. It is regrettable that they don’t come with at least one set of the die needed to play the game in a fast, efficient manner. That complicated dice mechanic makes me wonder how well this game will be embraced, which is sad because there are parts of this game to love.