I am a sucker for nerdy stuff. Pretty much anything that critiques, interprets, or analyzes what goes on in the pages of our favorite comic books is right up my alley. That’s why I love Jay and Miles X-Plain the X-Men. It’s why I totally dug James Kakalios’s The Physics of Superheroes. It’s why I have a hard time resisting the purchase of “pop” books like Deadpool and Philosophy and Supervillains and Philosophy.

And it’s why I thoroughly enjoyed Humans and Paragons: Essays on Super-hero Justice. 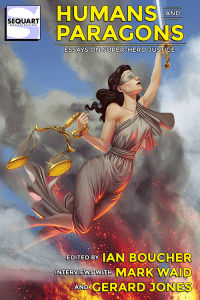 Here are the kinds of ideas the book tackles:

Or as the collection’s editor Ian Boucher writes:

As our stories entertain us, what else are they communicating? What assumptions do they support, and where do those assumptions come from? What do they do for us as a culture? What we tell each other through our stories reveals a great deal about the societies in which we live. Everything we say is relevant to what we do, especially regarding those figures that we consider so inspiring.

These are my kind of questions, and if they strike you as interesting, then Sequart’s book is definitely for you.

A number of franchises and characters come under scrutiny. Including:

Humans and Paragons: Essays of Note

All of the questions raised and answers proffered across all of the essays stimulated thought, but two stood out to me above the rest.

“Defenders of the Status Quo” by Paul Jaissle.

I had honestly never thought about the question posed by Jaissle:

…despite their abilities, super-heroes never seem to stop crime as a whole or adequately address its root causes. Despite the growth of the genre and the characters, super-heroes are still reacting to the symptoms of injustice rather than using their physical or moral strength in a proactive way to enact social change. This raises an important question of just what super-heroes are fighting for: are they defending justice, or just preserving the status quo?

I do think there are some stories that explore heroes pursuing justice beyond the status quo (see The Dark Knight Returns; the subject of much scrutiny in the essays!), and I’m not quickly convinced that “defending justice” and “preserving the status quo” are necessarily mutually exclusive. But this essay is fantastic and the last line is a great mic-drop moment. 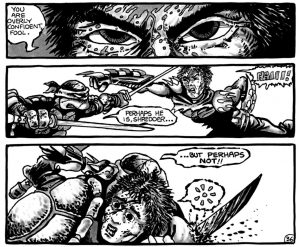 “Turtles on Trial:  The Double Standards that
Mutate Society” by John Loyd.

It is no secret that I love all (well…most) things TMNT. I knew them back when (and own many comics wherein) they were killers, and not ambiguously so. They were even what we might call today “repeat offenders.” So why do we not consider them killers? Don’t we label someone a “killer” or “murderer” after a single offense in real life? Why the disparity and is the disparity acceptable?

A Book that Has Fun with Hard Questions

Today we look critically at all kinds of ancient literature and art (hieroglyphics, poetry, myth, etc) not necessarily to give it a thumbs up or down, assign it a score from 1 to 10, or determine whether it is rotten or fresh, but to see if we can learn something via the fiction about the culture which produced it.  Surely we can expect a similar treatment in another hundred years.

Heck, the super-hero stories we told only 70 years ago spoke volumes of our culture’s ideas of heroism and justice by depicting Superman siding with the US against Germany and Captain America punching Hitler. So what are we communicating of ourselves today through this medium? Again to quote Boucher in the introduction to the essays:

…this book of essays…is just one reminder…to keep talking about what makes our heroes heroic, in whatever capacity the discourse ultimately needs to be; not for the promotion of super-hero comics, nor for the belittlement, but because super-hero comics do so much, and it is their most fundamental element.

Don’t get me (or any of the writers) wrong: We love the super-hero genre! The essays are not a smear campaign by any means. Instead, they are largely written in defense of the stories as they’re told in comics or by cinema.

And I am of the opinion that we critique only that which we love and only because we want what’s best for what we love. It is why we have everything from movie critics to political lobbyists. Sequart’s Humans and Paragons loves heroes and cannot envision a world without them.  Grab it from Amazon here!

All Our Nerd Arguments are Settled. Science Picks the…