Like many other popular TV shows and movies, Doctor Who has not remained solely in the realm of the screen. Doctor Who has appeared in many other forms from audio adventures (see our article on Big Finish productions from a few weeks ago) to stage plays, comic books, and more. A major part of that has been in the form of books. 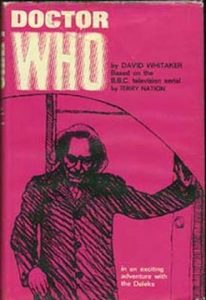 The very first Doctor Who book came out in hardcover in November of 1964. Titled Doctor Who in an Exciting Adventure with the Daleks and written by David Whitaker (who had the been the television show’s first script editor), it was a novelization of the 1963 television serial, “The Daleks” by Terry Nation.

Although it is a novelization, the book deviates from the television serial in a number of ways. In particular, it provides a completely new origin story for companions Ian Chesterton and Barbara Wright. At the time, no one expected there to be novelizations of other Doctor Who stories and so, even though “The Daleks” was not the first television story, the book had to treat it as if it were. As such, it opens with Ian and Barbara (who do not already know each other like they do in their first television appearance) encountering each other as well as the Doctor and his granddaughter Susan during a car crash.

The book is also written in the first person from Ian’s point of view. The use of first person would become extremely unusual for Doctor Who books in later years.

Doctor Who in an Exciting Adventure with the Daleks sold better than expected, quickly selling out its initial print run, leading to it being reprinted just a year later. It would go on to be reprinted multiple times over the next several decades (later retitled Doctor Who and the Daleks or Doctor Who – The Daleks). In 2016, BBC Books released a facsimile of the original edition.

With the success of this first book, another book soon followed in 1965: Doctor Who and the Zarbi by Bill Strutton, based on the television serial “The Zarbi”. This was the first novelization to be written by its original television author and also established the later naming convention of Doctor Who and… It, too, has been reprinted on several occasions, with one 1975 reprint bizarrely having a picture of Tom Baker on the cover (Tom Baker was the fourth Doctor and the book was written well before there was even a second Doctor).

Next up, also in 1965, was Doctor Who and the Crusaders by David Whitaker, based on the television serial “The Crusades”.

In 1972, Target Books, an imprint of Universal-Tandem Publishing, was established. It was to be a line targeted at adolescents of about 14 years of age. Target Books would go on to be most closely associated with the publication of Doctor Who novelizations. The imprint changed hands a couple times during its lifetime, but was most associated with W. H. Allen & Co., who owned it from 1977-1989, and Virgin Books, who owned it from 1990-1994.

In 1973, Target Books began its Doctor Who line when they purchased reprint rights for the three 60s novelizations. They then followed this with Doctor Who and the Auton Invasion by Terrance Dicks in 1974 (based on the 1970 television serial “Spearhead from Space” by Robert Holmes). 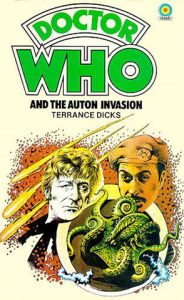 After this, they continued to print numerous novelizations of Doctor Who television stories throughout the 70s and 80s. By the end of the 80s, almost every televised Doctor Who story had been novelized. The books were primarily paperback, but W. H. Allen did publish some limited-run hardcovers in advance of their paperback release by Target. 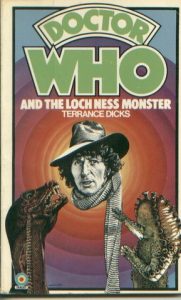 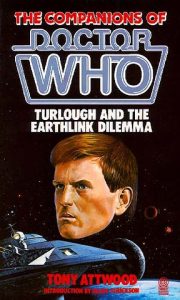 Most early Target books also followed the naming convention of Doctor Who and… However, there were a couple notable exceptions, such as Doctor Who – Death to the Daleks. In the 80s, however, Target removed the “and” and simply titled the books using a dash after Doctor Who. By this time, all novelizations were being published with their original television titles. Reprints of earlier novelizations would also sometimes remove the “and” from the title.

In the 80s, Target began looking beyond the television series for source material. They experimented briefly with publishing original novels in the Companions of Doctor Who line of books. Each book featured a companion of the Doctor after that companion had left the Doctor. The line began with Turlough and the Earthlink Dilemma by Tony Attwood, and continued with Harry Sullivan’s War by Ian Marter. Only one further book was published in the series, a novelization of the spin-off K9 and Company. 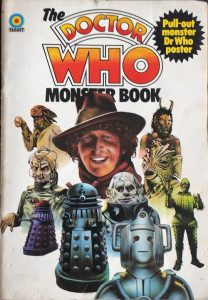 There was also a short line of Doctor Who Missing Episodes books. These were novelizations of scripts for the unproduced Season 23 (stories originally planned for when Doctor Who went off the air for a year in 1985).

W. H. Allen published several Doctor Who-related books separate from the Target line. Most notable was Doctor Who: A Celebration by Peter Haining. This was the first factual hardcover book giving an overview of Doctor Who. It was published in 1983 to celebrate the show’s 20th anniversary. Haining then wrote several other books to follow up on this one. 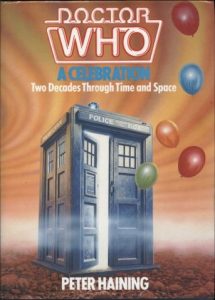 Yet amidst all these various Doctor Who books that were available by the end of the 80s, there was one kind of book that was conspicuously absent, despite the fact that other popular shows, such as Star Trek, had them in droves. Apart from those two Companions of Doctor Who books, there had been no original novels.

How to Play D&D or Pathfinder in Your Pocket