As the 1980s came to an end, so too did the classic Doctor Who series, which broadcast its 26th and final season in 1989. By this time, the majority of television stories had been novelized by Target Books, with only the most recent season’s stories and a few others remaining.

(Click here for part 1 of this series on Doctor Who books, which covers the Target era.)

In 1989, Virgin Books purchased the Target imprint from W. H. Allen and over the next couple years, continued to publish novelizations under the imprint. They also reprinted many earlier books in the line. By 1991, however, only a handful of stories remained unnovelized, the ones which Virgin Books had not yet resolved rights issues for.

In 1993, two of those stories finally saw publication as novelizations: the second Doctor stories “Power of the Daleks” and “Evil of the Daleks”, both originally written by David Whitaker and novelized by John Peel. These were both published as longer novels, rather than as the shorter books the rest of the line had typically been published as. This was to keep in line with the other Doctor Who books that Virgin was replacing the novelizations with (more on that in a moment).

The final Target book, The Paradise of Death by Barry Letts (producer of Doctor Who from 1970-1974), was published in 1994. It was the 156th book in the range and was a novelization of a radio play also written by Letts. 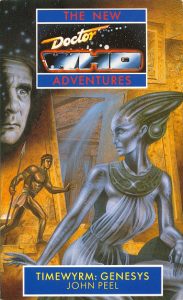 Only five television stories remained without novelizations: three 70s stories written (or co-written) by Douglas Adams and two 80s Dalek stories by Eric Saward. In each case, this was due to agreements not being reached with Adams or Saward.

However, when Virgin Books took over the Target imprint, they realized immediately there wasn’t much left to do with it. The line no longer published anything that wasn’t Doctor Who and with television stories to novelize running out, they needed to do something else. So they approached the BBC to request the rights to publish original Doctor Who fiction, which the BBC granted after the series ended in 1989.

The line opened with a four-book series: Timewyrm: Genesys mentioned above, Timewyrm: Exodus by Terrance Dicks, Timewyrm: Apocalypse by Nigel Robinson, and Timewyrm: Revelation by Paul Cornell. This was followed by a three-book Cat’s Cradle series, and then by individual stand-alone novels (though with a continuing continuity). Initially, the line came out bi-monthly, but its popularity soon resulted in an increase to a monthly schedule. 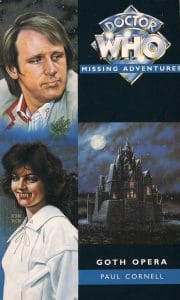 The New Adventures continued the story of the seventh Doctor after the final television story, “Survival”. It greatly expanded on the character of the Doctor’s companion Ace, and over time, introduced new companions, in particular, Bernice Summerfield, who would go on to become one of the more popular companions despite never appearing in a television episode.

Although many established authors, like Terrance Dicks, contributed to the line, many new authors got their start in the line as well, as Virgin had a very open policy regarding submissions. Some of those authors, such as Paul Cornell, have gone on to become best-selling authors in their own right. Others have become big names in television production, such as Mark Gatiss (who wrote several New Adventures and has since written several episodes of the new Doctor Who series as well as co-creating the series Sherlock) and Russell T Davies (who brought back the TV series in 2005 and was showrunner for its first four years).

The popularity of The New Adventures led to fan demand for stories with earlier Doctors, and so, in July 1994, The Missing Adventures began with Goth Opera, a fifth-Doctor novel by Paul Cornell. This was followed monthly by other books, each featuring one of the first through sixth Doctors (with one book, Cold Fusion by Lance Parkin, being a multi-Doctor story featuring the fifth and seventh Doctors). Like The New Adventures, both established and new authors contributed to the range. 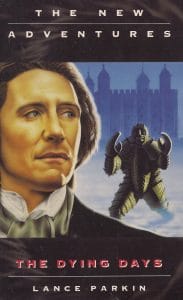 In 1996, Doctor Who briefly returned to television screens with the TV Movie introducing the eighth Doctor. Virgin Books’ licence was up for renewal around this time and the BBC decided that, with the advent of a possible new series (which the TV Movie was intended to be the pilot for), this was a good time to bring Doctor Who books in-house and publish them under their own BBC Books imprint. As such, the BBC decided not to renew Virgin’s licence.

That same month saw the publication of the chronologically last New Adventure to feature the Doctor. The Dying Days by Lance Parkin was the only book published by Virgin to feature the eighth Doctor, and it contained a meeting between the eighth Doctor and popular companion, Bernice Summerfield (as well as Brigadier Lethbridge Stewart and the return of the Ice Warriors).

May 1997 actually saw the release of one more New Adventures book featuring the Doctor, So Vile a Sin by Ben Aaronovitch and Kate Orman. This book (with the seventh Doctor) was due earlier in the series and had been delayed due to manuscript problems. 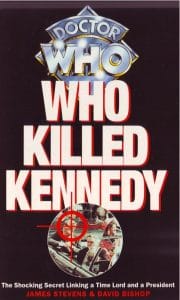 By the end of Virgin’s licence, they had published 61 New Adventures and 33 Missing Adventures. Virgin also published a handful of other Doctor Who books, including several collections of short stories, the first called Decalog, and the subsequent books called Decalog 2, etc. They also published one Doctor Who novel that was not officially part of either the New or Missing Adventures lines: Who Killed Kennedy?, the title being a deliberate pun. The book is told from the point of view of a reporter trying to uncover the secret of the Doctor and UNIT, and is a fascinating look at how the rest of the world might see the adventures of the Doctor.

Although Virgin’s licence to produce Doctor Who novels had come to an end, The New Adventures didn’t. Instead, the books changed to focus on the adventures of Bernice Summerfield. Over the next two years, Virgin published 23 more New Adventures books (now under their own Virgin imprint). The books were mostly written by established New Adventures authors, including Paul Cornell, Kate Orman, and Terrance Dicks. The final New Adventures book, Twilight of the Gods by Mark Clapham and Jon de Burgh Miller, was published in December 1999. 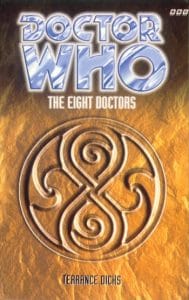 But while the Doctor’s adventures were not continuing from Virgin, they were continuing in a new form from BBC Books, which began releasing two lines of monthly Doctor Who books: the Eighth Doctor Adventures (EDA) and the Past Doctor Adventures (PDA), similar to the divide between Virgin’s New and Missing Adventures. However, unlike the Virgin books, the covers made no distinction between the lines and simply featured the Doctor Who logo.

The EDAs began in June 1997 with The Eight Doctors by Terrance Dicks. That same month, the PDAs began with Devil Goblins from Neptune, a third-Doctor story by Martin Day and Keith Topping. Many of the same authors from the Virgin Books lines wrote for both the EDAs and PDAs, but mixed in were also several new authors. At first, the books ignored and even sometimes contradicted the continuity of the Virgin books, but over time (due primarily to the influence of authors who had written for both publishing companies), the distinction between the continuities blurred. 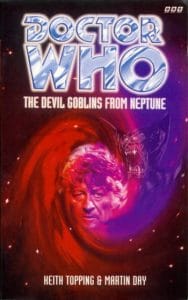 Over the next few years, BBC Books published 73 EDAs and 76 PDAs. The final EDA, The Gallifrey Chronicles by Lance Parkin was released in June 2005. The final PDA, a seventh-Doctor story by Andrew Cartmel (the original series’ final script editor) called Atom Bomb Blues came out in December 2005.

Of course, 2005 contained much bigger news for Doctor Who fans: the return of the television series itself. This would, naturally, have a big impact on the future of Doctor Who books—a story we will delve into next time.

How to Nerd on A Budget: Free and Cheap Ideas