By Michael Adkins On May 18, 2017 Last updated Jan 11, 2021
Share TwitterReddItPinterestFacebookEmailPrint

When all things Star Wars EU (Extended Universe) were basically demoted to unofficial fan fiction, Grand Admiral Thrawn was, in my opinion, the single greatest casualty. I loved Timothy Zahn’s Thrawn Trilogy (also called the Heir to the Empire Trilogy) with a zeal only reserved for what I consider the best of the best; constantly pushing the books onto anyone who said, “Thrawn who?”

They had to know!

I would ten times over rather read about Thrawn than Darth Vader (though, to be fair, I’d ten times over rather watch Vader than Thrawn). You could go just about anywhere in the Star Wars Universe to see awesome physical displays of power, violence, and The Force. But Thrawn was the person to follow if you wanted to watch unparalleled genius at work.

And if only having three books and a short story (which you can read in its entirety here) wasn’t bad enough (I wanted more!), they had to go and strip him of his canon?!  For shame.

Thrawn made his official return to canon in 2016’s third season of Star Wars Rebels and featured in his first novelization in over two decades this year. And to make things even better, the eponymous novel was penned by the man behind the sensational original trilogy: Timothy Zahn. 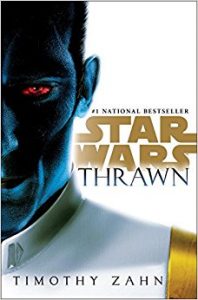 Thrawn starts off pretty slow. You’re along for what feels like two separate and unrelated story lines as chapters flipflop between Thrawn and Arihnda Pryce, but you’ll later discover that the two stories are convergent (if you weren’t already aware of the fact that the two were destined to cross paths via Rebels).

The first chunk of the novel is a more detailed retelling of the “Mist Encounters” short story (linked above), but afterwards focuses on the pair’s ascendancy within the Empire with a slightly greater focus on Thrawn. At first, I felt kinda mislead…With a title like Thrawn, you’d think it would focus almost exclusively on that character. But as the story developed, I came to understand and value the fact that the book involves other characters because Thrawn requires others to climb the ranks and advance in the Imperial Navy. Their stories are essential elements of his own. There is a depth of narrative there to be appreciated.

There is, of course, a villainous opponent with whom Thrawn engages in his trademarked intellectual outmaneuvering, but “Nightswan” was kind of underwhelming. He didn’t feel like much more than another stepping stone to Thrawn’s advancement. Eli Vanto, on the other hand, an Ensign assigned to serve as Thrawn’s aid, is a fantastic addition who evolves as a character more than even Thrawn. At the end of the novel, he’s given an opportunity that I won’t spoil here but that I 100% want to read in novel form sometime soon.

Everything in the book feels like a move in a chess game and many of those feints and maneuvers are unpacked by the characters who extrapolate, deduce, and theorize all the possible actions, results, and counters. It reads with a fairly decent balance between strategy and implementation; giving you an opportunity to think right along with the characters before you’re invited to read through the action-packed executions.

Each chapter begins with excerpts from Thrawn’s personal journal that reads a lot like Sun Tzu’s Art of War, but that isn’t the only glance into the Grand Admiral’s mind that we receive. Throughout the book, the perspective often shifts from third person to first as we are made privy to Thrawn’s perceptions and interpretations.

Thrawn grooms Eli Vanto using the Socratic Method, but it never really felt as if Thrawn believed he had anything to gain from that method himself – besides maybe validation and a sense of achievement for leading Vanto to his already-arrived-at conclusions.

This makes Thrawn feel infallible. I mean, he gets “outsmarted” early on in the book, but we only perceive it as a failure because it’s Thrawn. Had it been any other Star Wars villain, we’d chock it up to the wit of the opponent, not as a failure. The one trickiest hurdle for writing a compelling Thrawn story is giving him an equal adversary. I mean, if we’re honest, even in the original Thrawn Trilogy, Thrawn was beaten by a bit of a deus ex machina…not by a superior or truly rival opponent.

But I’ll be darned if the books aren’t good reads regardless!

You’ll find yourself rooting for the Empire against the Rebels; an interesting deviation from the norm.  From the very beginning, you are pro-Thrawn. And its not wrong.

A Brief Pitch for the Audiobook

I have never listened to a Star Wars audiobook, but that might be the only way I do Star Wars books from now on; especially if Marc Thompson is the narrator. He does such a fantastic job of leveraging unique voices for each of the characters that the necessary-while-reading “_______________ said” at the end of many lines of dialogue are made absolutely unnecessary. And he gets animated at times which brings a certain dynamism to the listen.

In addition to Thompson’s great work, the book feels like it is scored just like any of the movies.  Familiar snatches of iconic orchestral pieces and sound effects are almost constantly in attendance without dominating the narration. They always enhance.

The audiobook is super, super well done and is an experience worth the additional bucks or Audible credit.

With Thrawn returned to official canon: Grab. This book does a great job of characterizing him: His motivations, his honor code, the way he thinks and analyzes. Thrawn is foundational to the character in the same way that I believe Innocence Lost is foundational to all things X-23. Sure, you can get by with those characters without these pieces to their puzzle, but I’d argue that the picture is incomplete.