What RPG player doesn’t  like a good booty haul?!  What treasures did the party retrieve from the depths?  Will it all once again go to Umlo?  Find out in Episode 119: Booty and the Beast.

The party emerges from the sunken temple in the lake with the third item needed to relight Minderhal’s Forge, a ton of treasure to go through and some major decisions to make on where to go next. 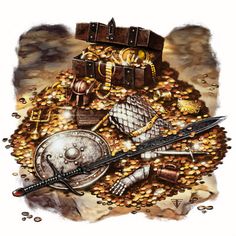