In case you didn’t notice, Paizo has released their amazing Starfinder tabletop roleplaying game and it has been enormously successful and well received thus far. (To be honest, if you didn’t know, I am a little sad. Have you not been listening to the Drift podcast that we produce? We’ve been telling y’all for awhile….)

But one of the issues is that because Starfinder is a new product, you may run out of material to play if your group plays each week. So when it comes time to do some homebrew content, what are you going to do? Don’t fret your pretty little space head. Here are some quick ideas borrowed from some other pretty obvious places that can be launch points for your adventures. 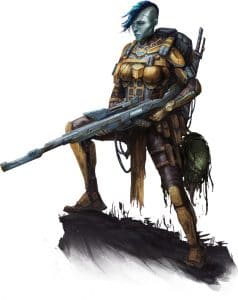 Freeing an android colony that is still held captive. In the Starfinder setting, androids moved from constructs to full citizens around 160 years ago. But imagine that there is a rogue corporation that has been holding a mining colony of androids captive and they are unaware of their freedom.

So, your party of adventurers is sent to break them free.

Bonus fun would be crafting some really odd android NPCs. I imagine that they are crafted together in weird conglomerations of parts and pieces; think about the Island of Doctor Moreau if redneck mechanics ran it.

Also, they would be two to three times the lifespan of androids, who normally choose to reset every 90 years or so giving their bodies to the next generation. A worthy mission with weirdo NPCs that you can have occasionally show up. 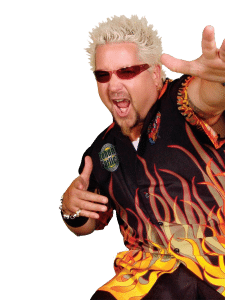 Diners, Drive-In and the Drift. In the setting, the Pact Worlds share lots of things in common and if there is one things that everyone likes to get all worked up about, it is food.

Imagine the Starfinder equivalent of Guy Fieri, a Vesk Envoy with the Icon theme who just can’t wait to tell the Pact Worlds all about the amazing food discoveries across the galaxy.

Introduce the character and have him bump into the adventurer’s a few times before having him go missing and the adventurers are hired by his fan club to go find him and bring back the Mayor of Flavortown.

Instead, they have managed to gain control of Absalom Station and have devised a plan to break the magic system that allows the Drift to work. With that lack of speed of travel, the Pact Worlds and the universe could rapidly descend into chaos.

Bonus NPC: the Ysoki lead janitor of Absalom Station who knows the layout and area of the station but is useless in a fight but keeps bringing up weird items out of his mouth pouch; I’d build a fun little table to let PCs roll each time he reaches into it to see what comes up.

Space Romeo and Juliet. The classics are classics for a reason and Shakespeare’s Romeo and Juliet needs a space update. This one you can take in a ton of directions. Maybe your group is hired by your Juliet’s side to bring her home. Maybe the Romeo side engages you as security.

Regardless, it would be fun to take your party’s loyalties in regards to classes and races and stretch them out as they have to pick sides. If the Starfinder-crossed lovers survive, you have a couple of hormonal NPCs with a fondness for PDA that can show up from time to time. 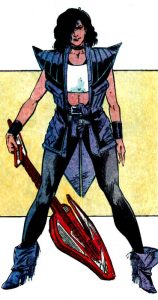 Bodyguarding a Starfinder Rock Star. You know who understood space, celebrity, and rock-n-roll? Chris Claremont. So, take his wonderful character of Lila Cheney, who in comics is an intergalactic space rock-n-roll icon, whose mutant power is the ability to teleport, only massive, massive distances.

With a few tweaks, you can update this character to be in need of protection and hire your adventurers to escort her. If you want to keep the wildness of her powers from the Marvel Universe, tweak it so her ship winds up going vast distances in space with no direction. And, again, if she survives, you have another crazy NPC that can show up from time to time.

Or if you are more into disco, change it up and use the mutant Dazzler.

These are just ideas to get you started. Take them and run with them. And play more Starfinder!

What home-brew ideas have you run at your table?  Let us know by dropping in to our Starfinder-centric The Drift Facebook Group and sharing your idea that with growing community of players!