As much as we have said that this is the era of the nerds winning, the truth is that we have rare critical success and awards success with nerd films and works. When is the last time that a Marvel movie was nominated for, much less won an Oscar? The last great success of the nerds was the Oscar wins for when The Lord of the Rings: The Return of the King in 2003, and even that was discounted as being an award for the whole series, not just that one film.

But as the award season has been progressing this year, we have seen a genuine nerd on the verge of even more success than he has had before; nerds should be pulling for Guillermo del Toro and his work The Shape of Water.

The Shape of Water is one of the best films of the year. Like previous del Toro works, cinematically, the film is visually striking. Set in the 1950s, the film embraces that era with a beauty that is exquisite. The movie is an homage to the song and dance movies of the era, while telling the romantic love story of a sea creature man and a mute woman who works at a government facility. It is an amazing film and well worth the time to see and it is understandable that it has been nominated in several categories for major awards, and an Oscar nomination as the Best Picture and a Best Director nomination for del Toro.

But del Toro is an old school nerd. Having been raised in Mexico, he has a deep love for horror, and began his career as a makeup supervisor before making the transition to director. His first American film was Mimic, a horror piece starring Mira Sorvino as a scientist who unknowingly releases her creation out into the world.

Because of the issues of working within the studio system, del Toro would take some time off before returning for Blade 2, the second story of Marvel’s vampire hunting hero. From there, he took on the Hellboy franchise, and later came the masterful Pan’s Labyrinth, a strange but beautiful horror piece setup in an orphanage. Since then, he has continually worked both as a producer and director to bring things to the screen. And while he can work in the arthouse beauty of the works like Pan’s Labyrinth and The Shape of Water, he also has had success with the blockbuster styles like Pacific Rim and television success with the show The Strain and the animated Netflix show The Trollhunters. Just on his work alone, del Toro is worth watching.

A Creator Worth Following 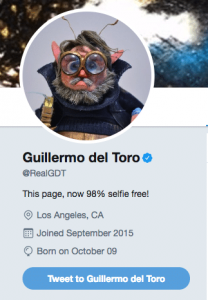 But, finally, del Toro is a creator that you should follow on Twitter. He’s proof of something that we hear a lot: if you want to be a creator, you have to be a consumer. Rarely, do we hear a successful writer, director, producer who doesn’t also consume lots of other things. It is almost like feeding the imagination requires a constant source of input in order to get any output.

Following del Toro on Twitter is seeing his constant stream of things that he is taking in. And with his love of films, books, comics and more, I’ve discovered many new things from del Toro, especially because of his willingness to point towards non-English films and shows. You can find him on Twitter at @RealGDT

So this season, we nerds may have a rooting interest in the awards. Guillermo del Toro is a nerd but also an amazing creator and his current project The Shape of Water is worthy of all the awards that it is up for. (And if you have not seen the film yet, it is being released wider, to more screens and cities currently, so you may can find it near you.)

Avoiding the Sophomore Slump: The Kid Who Would Be King is…