What can be learned from the history of Luke Skywalker’s Hideaway?

Star Wars fans know it as Ahch-To, but its Skellig Michael to the Irish.

By Clave Jones On May 17, 2018 Last updated May 16, 2018
Share TwitterReddItPinterestFacebookEmailPrint

Hey, can we just talk about The Last Jedi without fighting about it? Seriously, let’s just slip into a little lore, determined to leave the shouting behind, replacing it with a little nerdery on Luke Skywalker’s Jedi Hermit Hole.

Luke Skywalker’s hermitage on Ahch-To was filmed on the island of Skellig Michael, just southwest of Ireland. It’s not rare for Star Wars to use Earth’s exotic beauty in filming. Tatooine was filmed in Tunisia in the region actually called Tataouine. Hoth was filmed on Norway’s glaciers. And Endor’s forest moon is the redwood groves of Northern California.

But the producers of The Last Jedi did something a little different with Skellig Michael. They also adapted the bizarre, very real structures built by its former inhabitants. Luke Skywalker’s ancient Jedi shelter is actually a building type called a clochán, a primitive stone dwelling that stands preserved on Skellig Michael. 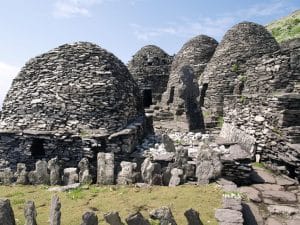 Clocháns are sometimes called beehive huts and were built by Christian monks who first settled the island in the 6th or 7th century, folks who knew a little something about isolating themselves. A beehive hut typically has a circular footprint that tapers into a domed roof. Skellig Michael lacked timber large enough for construction, so the monks used the stone that was available. The stones are cut flat, rough and uneven on the outside face, but smoother on the inside. And the walls of the clocháns are unmortared masonry, most likely due to the absence of lime for making mortar.

The clocháns of Skellig Michael were inhabited from the founding of the monastery until about 1200, after which the monks left the island due to a worsening climate. They abandoned their huts, as well as a stone church, but the monastic order continued to visit and maintain Skellig Michael.

Christian monasticism is the tradition of individuals who live ascetic and cloistered lives that are fully dedicated to Christian worship. The word monk originated from the Greek monachos, meaning “alone” and their origin story traces back as far as the Old Testament and the stories of pious prophets in the wilderness. In fact, early monks lived entirely alone like Luke Skywalker, and didn’t even gather and form monasteries.

Enda of Aran is considered the “patriarch of Irish monasticism.” Early in life Enda was a warrior-king, until he was converted to Christianity by his sister.  When Enda’s father died, he succeeded him as king and went off to fight his enemies. 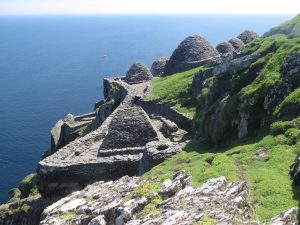 As an incentive to coax him into laying down arms, he was promised a young girl for a wife. The girl he was promised died tragically, and in viewing the girl’s corpse, he was reminded that he too would face death and judgment. So, faced with the reality of death, and guided by his sister’s persuasion, Enda decided to study for the priesthood.

I’ll leave it to you to decide if Enda’s story has any parallels with that of the Skywalker line.

The Irish monastic rule was rigorous. And they developed a distinctive form of penance, which was considered therapeutic rather than punitive. Whereas confession was made privately to a priest, handbooks were made for the Skellig Michael monks, called “penitentials”, which were designed as a guide for confessors and as a means of regularising the penance given for each particular sin.

The daily routine of monastic life was prayer, study, and manual labor, the central themes poverty and obedience. In keeping with the traditional asceticism of Christian monks, they developed a simple system for collecting and purifying water in cisterns.

Food was very strict. Only one meal a day, at 3 o’clock p.m., was allowed, except on Sundays and Feast days. Monks of that ilk would typically farm but the lack of arable land on Skellig Michael meant they grew less grain and vegetables, and out of necessity, instead relied on fish and the meat and eggs of birds nesting on the islands. Sorry, porgs.

Speaking of the porgs, well, that was an unintended consequence of filming in a location with protected puffins. Rather than try and work around it, The Last Jedi just leaned into it…just like they did with the rest of Ahch-To.

Why are Nerds so Mother-Table-Flipping Miserable All the Time?