The Kickstarter campaign for Nickelodeon’s Splat Attack from IDW Games is live right now!  It is a miniatures game that pits teams of some of the most popular and nostalgia-inducing franchises from the 90s against one another in a cafeteria-sprawling food fight!

You’ve got four persons, featuring super familiar faces from Spongebob Squarepants, Invader Zim, Rugrats, and Hey Arnold! You are free to mix and match across those franchises to make your dream team of 90s Nicktoons! Check out the informative trailer below.

It looks like there might be a small deck building element with the Food Cards, or it might be as simple as a general deck from which all players draw. Once played, you pair a single number at the top with your Aim to determine the amount of dice you get to roll against an opponent. How far you can throw a food item (Range) and how many spaces you can move during a turn (Speed) also look to be character specific. It is hard to tell from the video since only Gerald’s numbers are shown in the video (I even checked the background!). 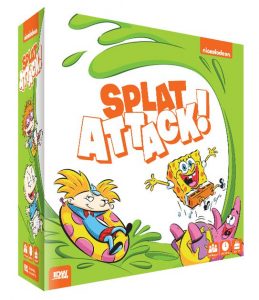 It does look like each character will also have a special ability unique to them. I’m not sure if those reflected in the video are accurate to the final product, but you can get a feel for them if you pause and squint a bit!

The dice mechanics are simple; no evident defensive rolls a la Teenage Mutant Ninja Turtles: Shadows of the Past. I think this is due in part to an apparent goal of making this super accessible to kids.

Simple gameplay, low numbers on Food and Character cards as well as in the Point scoring system, kid-friendly action and veneer…the choice to go with 1990s ‘toons draws us 30-somethings in, too!

And today’s generation will at least recognize Spongebob (who has an ongoing television series and modern movies), if not the others. The other three franchises ended by 2006 with the exception of a movie here or there.

The full Splat Attack pledge will come with the game, all stretch goals, plus the Reptar Expansion.

The Reptar expansion promises a new game mode and an absolutely massive mini. If he stands 100mm tall, he is double the height of the big mech minis to be featured in Galaxy Hunters and four times the size of your average 28mm mini. 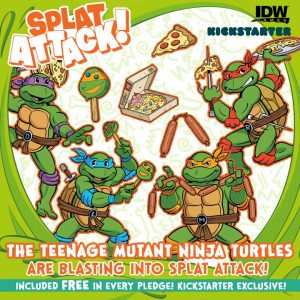 They also just announced that there will be a Teenage Mutant Ninja Turtles character and card set exclusive to the Kickstarter campaign, with aesthetics to match that of the cartoon that was hugely popular during the same time frame as the other shows featured. And it is free with any pledge which is awesome! (I’m hoping that the “combat cold cuts” I spy Mikey with will be a Food Card, too…!)

This game looks like pure and simple fun. I wanted to play it immediately after seeing the first promo images and even more after the trailer will rolled out.

Pop on over to the Kickstarter campaign to glance over the stretch goals and consider backing the title from IDW Games.

What are you feeling about Splat Attack? Drop in on our Boarderlands Facebook Group which is a dedicated space for all things board games and tabletop and let us know!

Create a Unique NPC by Giving them a Brand

What can be learned from the history of Luke Skywalker’s Hideaway?