You know the drill by now:

Fungeon Party from Wizkids Games fully embraces these five steps, but, boy, do they have fun with Step #2.  Trust me when I say you’ve never navigated a dungeon quite like a Fungeon dungeon (which is just downright fun to say, but, lordy, does autocorrect hate it).

The game’s setup is remarkably simple. The recommended 2-5 players picks one of the seven character classes taken right out of the pages of your favorite tabletop roleplaying game: Barbarian, Bard, Cleric, Paladin, Ranger, Rogue, and Wizard.

Each, of course, comes with an ability that can be used during play. Once they’ve set their character cards up with the appropriate Ability and HP Tokens and gather up their pool of five dice, they tackle a dungeon consisting of six or more face down Quest Cards; setting a timer for 30 seconds x the number of Quest Cards in play.

On “go,” you flip a Quest Card and hurriedly work together to complete its instructions. If you succeed, you place the Quest Card to the side to count towards your rewarded XP. You can also choose to Skip a Quest that proves a bit too tricky or even time consuming, but your party will suffer the consequences (read: someone’s gonna lose some HP)!

The round is over when the timer hits zero. XP is awarded for all successfully completed Quest Cards, and the party must pay the Penalty (loss of HP) for any left in play–including face down ones. Both HP and XP work like pools: The HP can be doled out however the party wishes, and so can the XP.

Maybe one character will take 2 HP of damage while another takes 1 and two others 0. Perhaps you’ll choose to give the Bard all of the XP so he can unlock more uses of his Ability (which lets him use anyone else’s ability).  Totally up to the party, and there is definitely some appreciable strategy during this stage.

Play continues until one character drops to 0 HP. If that condition remains unmet at the end of one Fungeon dungeon, then you set up another (which takes only seconds) and go again!

Alternatively, you can just play it once and give others a chance to play; forgoing the HP/XP stuff in favor of a pass/fail system based solely on whether or not you completed all the Quests in time.

The Quest Cards are the heartbeat of Fungeon Party. The game kinda reminds me of Quelf with its sometimes whacky requests of players. All of them involve some or all of your dice, but you may not always roll them.  Sometimes you’ll have to stack them or toss them or hide them or flick them. Dice will undoubtedly fly, and if you’ve got five players in your party, you’re talking 30 dice at times (5 per player plus the Monster Dice that occasionally come into play).

And you will not be seated during a significant portion of the playtime. This game will have you sitting under tables, spreading out, and placing boxes on your head–all on a pretty severe time crunch. 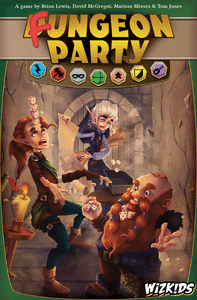 Since we’d never played before, we didn’t know what to expect from the Quest Cards which meant we had to read each carefully…but also very quickly!  The instruction manual is fair in suggesting that you add two extra minutes to your timer for every five or six Quest Cards in play while you’re learning.

The speed at which you’ve got to work can make it easy to forget your Character Abilities, but try your best not to! It is so, so easy to get caught up in the tasks commanded by the Quest Cards to totally neglect the power you have to affect the outcome.

Even if you do forget to use your abilities, you’re gonna have fun trying to pass some of the tests! And each of the Quests commands full party participation; there is no sitting out.  Fungeon Party keeps everyone involved for every second of the timer, and that definitely makes it feel like a party game.

Fungeon Party does a pretty great job of testing you mentally and physically during its short bursts of actual play.  The Quest Cards are varied in their challenges, and a few even have levels of difficulty (the same challenge, but increasingly tough to pull off). And it’s fast paced, like Curio, another recent game from Wizkids.

It is rules light and simple to set up and play consecutively, which does make it ideal for a party-type game. You just keep throwing/hiding/stacking/flicking/rolling your dice until one of you dies. Simple as that!

It does require a bit of room to play and you will most definitely have to spend some time hunting dice at some point, but it is fun. And, as it turns out, its pretty fun to watch, as our play through drew a bit of an audience as we shouted instructions and performed all manner of dice stunts.

Snag yourself a copy of this entertaining title for your next party here!

[Disclosure: Wizkids Games provided Nerds on Earth with a copy of Fungeon Party for review purposes.]

A Simple Guide for Writing a GREAT Character Backstory