Need new monsters for D&D? The Creature Codex from Kobold Press is here

Kobold Press continues the success of Tome of Beasts in a new volume.

As a Dungeon Master, one of the challenges you face is keeping the game fresh. At low levels, there are just so many gnolls, kobolds and rat swarms that you can face. At higher levels, the challenge is giving your PCs a creature that isn’t entirely known to them.

The reality is that Wizards of the Coast has a strategy where their new books aren’t going to be something as DM-specific as a Dungeon Masters Guide or a Monster Manual; the approach that they are taking is to flavor in parts of that in their new works, the way that they did demons and fiends and high level creatures in the recent Mordenkainen’s Tome of Foes. So, where do you turn?

The Creature Codex from Kobold Press is Here 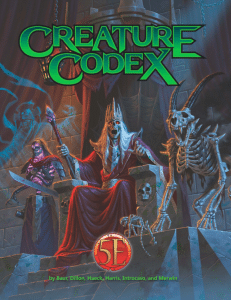 Kobold Press has recognized that there may be a lack of this kind of content being created and are willing to fill that space. Their previous work Tome of Beasts is an excellent resource as a source of new creatures and ideas for your tabletop roleplaying settings.

Many people hold it in high regard as one of the best non-WotC books for 5e Dungeons and Dragons. And given that success, it isn’t a surprise that they went back to work to repeat the formula and have given us the just recently released Creature Codex.

For full disclosure, I backed this product as a Kickstarter. Tome of Beasts is one of my favorite books for 5e and Creature Codex continues along with the things that make both volumes great. Here are some of the reasons that I greatly recommend the Creature Codex to you.

Each creature is more than just monster stats. In other sources of creatures and monsters for 5e, you tend to just get a stat dump and not much else. Which is fine if all you want to do is pick up a known creature’s stat block. But part of what stands out about the Creature Codex is that is they have been written to inspire ideas. When you look at some of the expansion that the book does, you get some wider diversity in your game.

For example, in Creature Codex, you get the new Animal Lords, which are introduced and then you get 7 versions of the idea. These near-demi-gods exist to represent the needs of the animal community to the gods in a humanoid version of the species of animals. The book adds a note that each of the Animal Lords knows a great deal, is willing to trade information for favors and that they sometimes partner together.

In just a few words introduction, I was inspired to think about what some of the Animal Lords not represented in the book might be, how to use them as a plot device in an existing campaign and to potentially create some more Animal Lords that were listed. Inspiration from an book like this makes it worth far more than just a repository of stats for creatures. 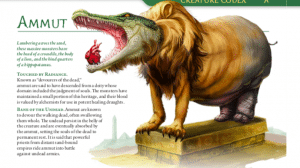 The art is beautiful and inspiring. The art of any good book of foes should be excellent and I have to say that Creature Codex doesn’t skimp. The book is gloriously illustrated and sometimes the illustration alone makes me want to use a creature. (I mean, you look at the Ammut. How do you not immediately want to put this creature with the head of a crocodile, the body of a lion (including the mane) and the hind part of a hippo into your game? I saw the art and immediately knew what the next tough random encounter in my Tomb of Annihilation game would be!)

I have the book in PDF form, which allows you to zoom in on details and it just makes the art stand out even more. And, though I do not have a copy of this product to review, Kobold Press also produced a set of pawns for the Creature Codex, which are similar to the Paizo pawns, sturdy cardboard figures that work great. 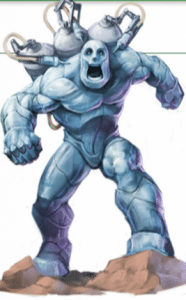 It is a reference book, not a one-shot. Creature Codex could have simply been a book that you read through once, tag the 30 or so creatures you really wanted to use and then move on from. Like Tome of Beasts, I think it will have a longer value than that. Over time, this is an excellent resource to thumb through as a DM. At different points, different kinds of creatures are going to stand out and be interesting.

What makes a good monster book is that diversity of creatures so that each glance could provide you something new. This will be the kind of book that you can pick up while you are in a rut and get some ideas for both short term and long term guidance in your campaign.

If you are DM or if you are looking for a gift for your DM, the Kobold Press Creature Codex would be an excellent resource to invest in for your group.