Recap and Review of Agents of SHIELD Episode 219: The Dirty Half Dozen

Last week, after a showdown at the Old Milwaukee Coral, aka Cal’s office, what happens to the surrendering Coulson? Who did Hydra manage to take and who is on the rescue mission to save them in Agents of SHIELD Episode 219: The Dirty Half Dozen?

[divider]Recap of Agents of SHIELD Episode 219: The Dirty Half Dozen[/divider]

The surrendered Coulson is trying to convince Gonzalez to make a partnership because Hydra has an Arctic base that they are using to experiment on powered people. Coulson talks about secrets and points out that Gonzalez has a large one in the hull of his boat.

At Inhuman Land, Cal drops the truth bomb in front of everyone about who is related to who and that cues the series of bad dramatic acting from crowd people. But after Gordon fails to rescue Lincoln, we are reminded that Raina had some kind of dream vision which showed the events before they happened.

At the Hydra base, Deathlok and Lincoln form an uneasy partnership through their cell walls before being zapped and experimented on.

Coulson talks Gonzalez into letting him reunite the old band to take the Arctic base with a small raid party.

Ward and Agent 33 land the quinjet on The Bus, and we get some reminder of the sexual tension between May and Ward, as all the pieces assemble. May clearly is doubting Coulson’s plan. But once they see the video of Deathlok’s being experimented on everyone realizes that something has to be done.

Then we get a nice comedic moment that ends with Simmons and Fitz talking about how to vaporize and take out Agent Ward. Which was funny until it passed the line that they are budding homicidal inventors, then it wasn’t.

Raina’s visions convince Gordon to take Skye to Shield and Ward convinces Agent 33 to stick around the base to connect with her roots. And Ward proves to be a weirdly successful therapist in a way, proving that he may wind up the Hannibal Lector of the Marvel MCU. Cal eventually gets released and tells Skye’s mom that Raina is very dangerous and needs to be watched. 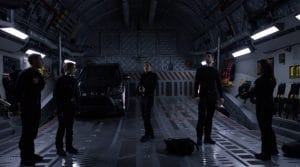 End result: The band is back together: Coulson, May, Skye, Ward, Fitz and Simmons, who manages to talk her way on the team with an agenda to kill Ward but a promise to help Deathlok. They load up the bus and we get a little bit of a moment, as Skye teleports in. Ward tries to talk his way out of his prior offenses, taking blame in an odd way, trying to regain a sense of team.

Hunter and Mac have a moment in the base, as they set up to watch the mission happen in real time. It is a classic “We’re cool right, bro?” moment. While Morse is working with Agent 33, trying to help her discover her past.

And here we get our Avengers: Age of Ultron drop, as the Arctic base people talk about how Lincoln and Deathlok are making it further than anyone else ever has, except for the twins. You can see Quiksilver and the Scarlet Witch at your local cineplex this weekend, seeing the twins they are referring to!

All this is just in time for them to realize a SHIELD plane is coming in. HYDRA blows up the Bus, destroying the base they’ve used since season 1.

But the team was in the smaller quinjet, riding the debris field to the ground and entering the base. Surprisingly, Bakshi is doing his job, just as Ward promised would happen. They have 15 minutes to get the shields down so Gonzalez’ SHIELD can bomb it to smithereens.

Skye uses her powers in dramatic fashion, with Ward taking notice. They save Deathlok, and then Lincoln, who was under surgery, with Skye doing an incredible job of taking down agents without her powers this time; though she does use her powers to kickstart Lincoln, who had flatlined, just like Raina said she would.

Simmons goes to eliminate Ward but instead vaporizes Bakshi. Ward lets her live and it is unclear how she feels about it.

Fitz has hacked the computers but Coulson is getting something from their servers, much to May’s dismay. But they all manage to escape. Ward goes his separate ways, telling Coulson that Kara (Agent 33) is a good person and worthy of redemption, but Ward also shares that he doesn’t have enough good inside of him.

Fitz and Simmons are putting Deathlok back together while Skye sits watch beside a comatose Lincoln. Gonzalez says that Skye is under custody, along with the other enhanced people. Coulson hands over Fury’s toolbox and then takes a call from Maria Hill, sharing with her whatever he found at the base. 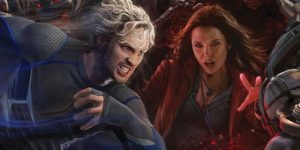 Skye’s mom then visits Raina, threatening her. And then, as Raina she catches a vision, which merges with Coulson’s phone call: Loki’s spectre – which killed Coulson – is in a European country and Hydra is chasing it because they know it can control minds. And Coulson declares that the Theta Protocol is upon us and it is time for the Avengers to enter, as Raina talks of metal men ruling the world.

The Death of a TMNT: Why It Had to be Donnie

A Look at the Trailers from this Summer’s Nerdy Movies