I’m always reading several books at a time, usually split between two itches: educational and recreational, the latter being almost exclusively populated by the members of NPR’s Top 100 Sci-Fi/Fantasy List.

But occasionally I am turned on to the likes of books that lie just outside of my radar, yet are brought to my attention by fellow nerds – and I, of course, use that term with much affection.

The last literary goodie sent my way was The Physics of Superheroes, and before that it was War Stories.  But each of those was months ago.  It was high time we hosted another solid book review.

Then Aidan Moher contacted me and asked if I’d be interested in reviewing his recently released Tide of Shadows.  This accomplished two things:

2) It solved our book review drought.

Review of Tide of Shadows by Aidan Moher 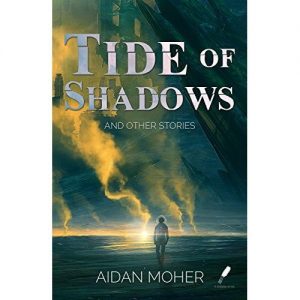 Tide of Shadows is a collection of five of Moher’s short stories, but it is also more. Moher included story notes at the conclusion of each narrative: A brief description of the process that lead to the preceding story. We’re always granted the product, but this is the first time to my recollection that I, as a reader, was made privy to the process.  This aspect of Tide of Shadows sets it apart not only in my memory, but also in the book’s appeal.

I’ll be honest: As I read “Of Parnassus and Princes, Damsels and Dragons,” I was quickly annoyed by the alliteration and overall saccharine prose.  Sometimes the elements by which a story is told overwhelm and override the story itself.  But Moher’s story notes owned up to it all and explained the methodology in a way that made it more than palatable, but downright insightful.

To borrow Moher’s own synopses of the five stories contained therein (to avoid accidentally spoiling that which ought not be spoiled!):

“A Night for Spirit’s and Snowflakes” is the story of a young man reliving the last moments of his fellow soldiers’ lives;
“The Girl with Wings of Iron and Down” tells the tale of a broken family and a girl with mechanical wings;
in “Of Parnassus and Princes, Damsels and Dragons,” we’re introduced to a  typical prince, princess, and dragon, and a not-so-typical love triangle;
“The Colour of the Sky on the Day the World Ended” follows a girls and her ghost dog as they search for a bright light in the darkness;
and “Tide of Shadows” is about a solider and his lover, a mother, and planetwide genocide.

Each story has its own charm and is almost completely different from the others as far as style is concerned.  I found this particularly relieving!  Moher tells five stories in such a way that each could easily be mistaken for having been penned by unique authors.  That beats the alternative of reading five stylistically identical stories obvious crafted by a single author – hands down.

I am particularly fond of three:

I would highly recommend Moher’s Tide of Shadows; particularly to any aspiring writers so that they might catch a glimpse of what goes on behind the curtain of what is published.  Even at south of 100 pages, the $2.99 price of admission seemed well worth it to me.  It is available for e-readers through Amazon.com here.

If you’ve enjoyed Nerds on Earth, please help us spread the word by using the social media buttons just below. Thanks for reading.

Review of Marvel Legendary: Battling Villainy One Card at a Time

Is Vision the Linchpin for Phase 3 of the Marvel Cinematic Universe?