This post contains spoilers for The Force Awakens, so turn your VCX-100 light freighter back toward the Duru System if you haven’t seen the movie.

After seeing The Force Awakens my wife asked: “Why did Han’s son keep hitting his side where Chewie shot him with his laser crossbow?” My wife is not a nerd. Obviously.

I typically try to avoid all instances of “um, actually”, if possible, because seriously, who likes that guy? But in this instance I was drawn to the Dark Side and launched into exposition regarding Chewbacca, bowcasters, blasters vs. lasers, and setting up how Rey, who had never wielded a lightsaber before, could defeat the much more experienced Kylo Ren.

Danielle, if you are reading, the answers to your questions are below.

Why did Kylo Ren hit his side? Well, it’s clear that Kylo Ren has a self-defeating aspect to his person, so why wouldn’t he punch his own wound? But the movie also set up excellently that Ren has a need to vent his anger and frustrations. In short, when his enemies (Finn and Rey) were standing too far back for him to lash out at them directly, he vented his anger by punching his wound.

And as much as the Dark Side is fueled by anger, rage, frustration, and the like, to wallow in the acute pain of his wound would also help him tap into that Dark Side of the Force.

So is that why Rey, who had never wielded a lightsaber before, could defeat the much more experienced Kylo Ren? Great question. The movie actually did an excellent job of setting this up, from Kylo Ren’s limping about, his howls of anguish, to the blood that dripped into the snow. It was easy for a viewer to see he was hurt, and hurt badly.

How badly? Well, a bowcaster shot bad. And that’s bad, as the movie also did an excellent job of setting up the fact that bowcasters pack a wallop. Heck, even after all he’s seen in the galaxy, Han Solo was impressed with Chewie’s bowcaster.

Was The Force Awakens Chewbacca’s best movie? Yes. Chewie is a toughie. 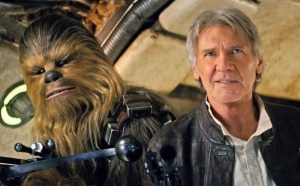 But what is a bowcaster and how are they different from the laser guns? Oy vey. There is so much nerding out we need to do with this question, but let’s hold it loosely and remember that the point of Star Wars is to have fun. After all, Star Wars is a fictional galaxy where the laws of physics might be different for all we know. (After all, a parsec is a unit of time there.) So why am I correcting a work of fiction? Ahdunno. Because I’m a nerd, I guess. [shrugs]

First, the weapons in Star Wars are not laser guns that fire laser beams. A good blaster is not an ancient weapon from a hokey religion, kids. Blaster is the term for many types of ranged weapons that fire bolts of energy. Specifically, Lucasfilm defines blasters as “ranged energized particle weaponry.”

In addition to most models have different settings such as ‘stun’, all blasters have a gas chamber filled with vapor (such as Tirana gas from Bespin). When the gases are energized by the blaster’s power pack, they get excited. (Now I’m getting excited…) THEN THE GASES ARE RELEASED AS AN INTENSE BEAM OF ENERGY THAT IS FOCUSED AS IT PASSED THROUGH THE BARREL! *Whew.*

For those who want to look cool in the Star Wars galaxy, blasters are carried in a holster. The difference between a smaller blaster pistol and a heavy blaster pistol (such as Han Solo’s DL-44 blaster) was that bigger models were heavier to use, delivered more powerful blasts, and can deliver about 100 shots per pack. Although it is also well known that Solo heavily modded his blaster.

As for bowcasters, it is a traditional Wookiee weapon that are hand-crafted on Kashyyyk according to ancient methods handed down through the trees. Like many Wookiee creations, a bowcaster combines traditional craftsmanship with the latest galactic technology. Bowcasters fire a metal quarrel encased in plasma energy.

But there is more. Through the use of magnetic acceleration, bowcasters were more powerful and accurate than the average blaster. Two polarized orbs, balanced on each end of the bow, create a magnetic field that boosts the quarrel’s momentum.

So why didn’t the entire galaxy use bowcasters then? Bowcasters are heavier and more difficult than a standard blaster rifle or pistol to hold steady and aim. And even though Chewbacca retrofitted his bowcaster with an automatic cocking system, traditional models lack that feature and would need to utilize a cocking spring, something a typical human would not be able to manage, as they lack the strength of a Wookiee.

Then why could Han Solo use Chewie’s bowcaster? Han Solo is a toughie.

I think my wife stopped reading by this point, and in her defense, I could go on all day talking about bowcasters. I’m a nerd.

You can read more about the weapons of Star Wars in some sweet guides like the Arms and Equipment Guide from 2002, but good luck getting your hands on that out of print datacard. Your best best for an updated sourcebook is the core rulebook of the Star Wars: Edge of the Empire roleplaying game. It’s excellent and has 450 pages of goodness.