As I was putting together this list of the 7 Best Nerdy Movies of 2015, I suddenly realized how great a year this was for nerds in the movie world. We had superheroes, an awakening, emotions, the end of a war, and so much more. What else could a nerd ask for?

So, as I go through this list, rest assured, fellow nerds, no spoilers will be said. No matter how long a movie has been out, seeing it for the first time spoiler free is always magical! Yet a small disclaimer: This list is in no way stating that other movies released this year were not good enough to make this list. These movies are ones that stood out for me and made my nerd-self too excited for words. 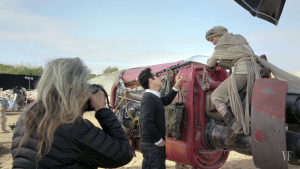 Let’s start with the one that is at the forefront of all our minds. We saw the first trailer last year on Christmas Day. And the internet broke. We waited with excitement and fear. Fear that we would be given another Episode I and excitement that we would finally have what we have waited thirty years for.

But let me tell you, that excitement grew the closer we got to opening night. And as the words “Star Wars” showed up on the big screen with John Williams’ amazing music blasting through the theater’s speakers, my little nerd heart almost exploded from joy. This movie makes up for the prequels. And more. My nerdy, feminist self is very happy with it. And that’s all I’ll say on that.

2. The Avengers: Age of Ultron

What list would be complete without throwing in some superheroes? And why not listing a movie full of a team of superheroes? Not only are The Avengers back in full force but we get a few new faces as well!

Again, no spoilers but oh my goodness! I did a little happy dance in my seat while watching this movie. Not only does the team save a city full of people (because why not? They can!) but they also save the world…again.

We have a little insight into Hawkeye, Tony Stark being conceited (again), Bruce Banner being meek and worried, Natasha being her confident, awesome self, Thor hitting things very hard with “Mew mew”, and good old Cap being an all around great guy!

But fear not, this isn’t just another Avengers movie. Things get real…real fast.

Want a movie with explosions, war boys, Mad Max, and awesome women? Look no further. This is the movie for you. I was told that I had to see this movie. So, I finally made the time to go…by myself. And I walked out of the theater feeling invincible.

Charlize Theron made me so happy. This may be a Mad Max movie but the main character is Furiosa. As in the past Mad Max movies, it centers on the people he helps. He’s a legend. This is the story that this group of people tell their grandkids. This is the story of how he helped Furiosa and the Wives save the Citadel. This movie brought back a franchise and spurred an influx of cosplay as well. [Here is more on why Mad Max’s apocalypse resonates so well.]

I read The Hunger Games series in two days. I tore through those books like they were on fire. And the movies have made me just as happy. It is always sad to see a series of movies come to an end and this year marked the end of The Hunger Games. And it went out with a bang.

I actually enjoyed this movie more than the book, which made me do a double take. We see the ending of Katniss Everdeen’s story and how that one moment of volunteering changed not only her life but the world she lived in as well. Old friends returned and new friends are made as war breaks out in Panem. And Katniss’ world is changing once again. [Here is more on why Katniss is the best.] 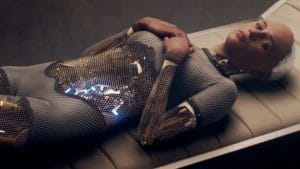 This beautiful, brilliant movie may be science fiction on the surface but it is just as much fantasy and mystery. We humans have always been a little unnerved by machines and what they are capable of. Always wondering about what will happen when they start becoming aware.

Alex Garland makes his directing debut in this thriller/mystery. And we want to see more of him! We see three amazing performances from actors that seemed to come from nowhere to me. You’ll recognize them from other nerdy movies but I was just blown away by each performance. It makes you question so much about everything.

No joke. Watch it.

Yes, this is a Pixar movie. Yes, some would say these movies are for kids. My argument would be that kids are nerds, too. But this movie appeals so much to adults as well.

I did not go into the movie expecting to cry. But I did. I cried so much. Almost as much as I did as a child watching Bambi for the first time. This movie focuses on an 11 year-old girl going through a drastic change in her life. But it doesn’t just focus on the girl, it focuses on her emotions as well. We go inside her head to see how her emotions try to help her cope with the situation she is thrust into. We see her grow through tears, laughter, and fear. I was thrust back to my childhood so many times.

Pixar is the only studio that can make us feel so much about emotions, just like they did with toys.

I wanted to end the list with a movie a little different. It isn’t your stereotypical nerd movie because it doesn’t have superheroes or action scenes. But it does have Guillermo del Toro as the director. And to me, that’s more than enough.

It’s a beautiful thriller with a great cast, amazing story, and awesome effects. As with most (all?) del Toro movies, I found myself speechless after it ended. You were suddenly a young woman placed in a very scary and unnerving situation with what seems like no way out. But you must endure. Before Crimson Peak takes you.

So there you have it. My list of the 7 Nerdy Movies of 2015 that you should watch. There are, of course, many more but it would take way too long to go through them all. Start with this list and go from there. You won’t be disappointed.