I cannot make an honest claim to a lifetime of comic readership, so I’m frequently hitting up fellow Nerds on Earth writers for recommendations. And they provide them, but occasionally I play the lottery that is the Discover button at the bottom of the Marvel Unlimited app’s home screen. There you’ll find a rotating cast of characters, series, and events neatly collected for easy reading.

Last week, I gave the Discovery button a tap and was immediately presented with a title I’d never even heard of: Marvel 1602. Normally I would have passed on what is clearly a very gimmicky title, but Neil Gaiman’s name was prominently displayed across the top of the first issue’s cover and I simply couldn’t resist.

I’ve read a number of Gaiman’s works: American Gods (soon to be a TV show), Neverwhere, Stardust, and The Sandman to name a few. I’ve thoroughly enjoyed them all. Gaiman in bed with Marvel was at least worth a looksy (and right after I typed that sentence I realized how risqué it sounds, but I’m sticking with it).

Set in the Elizabethan Era, Doctor Stephen Strange, the Queen’s physician who is, of course, just a little bit more than the title suggests, grows increasingly concerned with errant weather phenomena.  Many interpret the signs in Biblical light; as in the apocalypse is nigh!

While still more questions arise, a ship docks hailing from the New World (Roanoke, specifically) bearing with it two passengers of interest: Virginia Dare (the historically accurate first white Christian born in the British Colonies) and her protector – a native American named Rojhaz.

A Vulture-like assassin attempts to kill the young girl, is thwarted by Rojhaz, and later interrogated by one Sir Nicholas Fury. It’s discovered that the Vulture is an agent of Otto von Doom; a revelation that comes a little too late as a gift from Doom to the Queen turns out to be a deadly device. 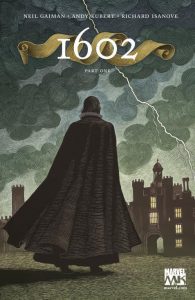 James IV, the Scottish king, inherits England and partners with Grand Inquisitor Enrique on a sort of witch hunt for what they call “witchbreed” but which we know more commonly as mutants. Meanwhile, a treasure of the Knights Templar and its guardians – among them one Matthew Murdoch, a blind bard – are betrayed and captured by Doom.

Uatu speaks to Strange in a vision and tells him that the weather and the presence of superhumans is due to an anomaly he refers to as “The Forerunner” whose presence in the past (his present) threatens to annihilate all known universes.

After a successful assault on Doom’s fortress, four thought-to-be-lost passengers of the ship The Fantastick are freed and Thor makes a booming appearance, and in an attempt to escape the witchbreed persecution of James and Enrique, they head for the New World.  There the Forerunner’s identity is made known, and that’s where I’ll end the plot synopsis so as to avoid big spoilers!

As you make your way through 1602, you’ll bump into numerous familiar faces and abilities albeit with Elizabethan veneers. If you’re a longtime Marvel reader, all of them will be painfully obvious – Gaiman didn’t set out to reinvent the wheel so much as retreat what has already proven serviceable, and I think he did a pretty solid job of it.

The story is very comic-y (what, with the universes threatened by an anomaly and all), but is cleverly delivered and dealt with. I particularly loved the following page in which Reed Richards speaks to the heart of the comic medium in a way that is profound and somewhat depressing all at once (with a couple of names in John Storm’s dialogue redacted to avoid some spoilers): 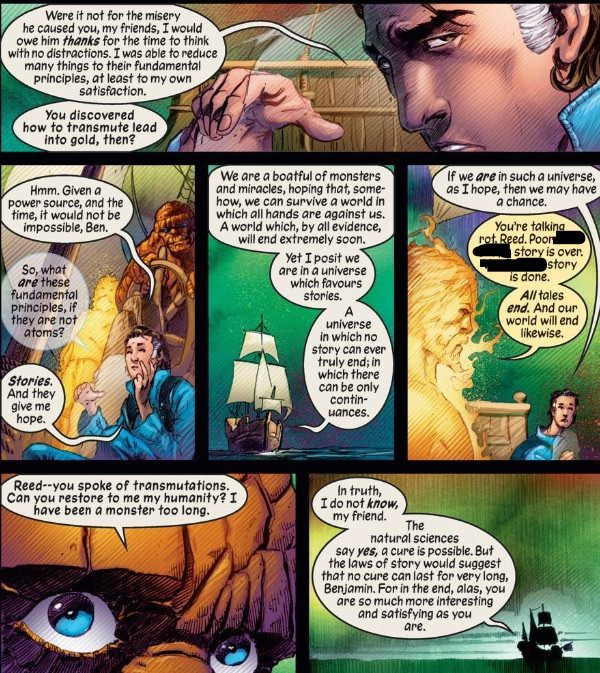 And Gaiman’s masterful writing is at its absolute best in the way Donal, one of the guardians of the treasure of the Knights Templar, struggles with his faith (Christian) and his experience as the god of thunder: 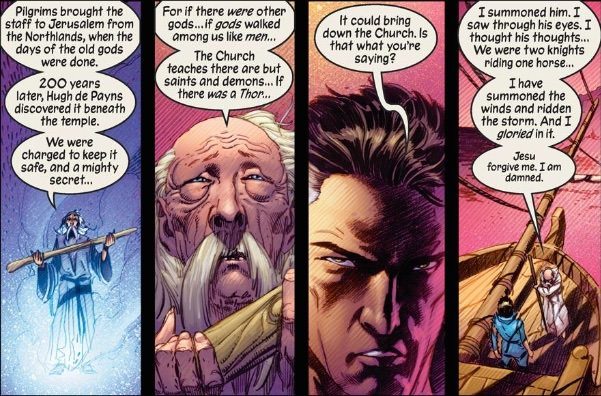 Clocking in at an easily consumed eight issues, 1602 is definitely a worthy read for any Marvel or Neil Gaiman fan. Is it the best Marvel has to offer? No, but it ranks a solid 8 out of 10 nerds.

And don’t let the low-B grade fool you! I sincerely recommend the short series. It is something different, and the different is done well.

The whole run is readily available in the Marvel Unlimited app or here from Amazon, and its success spawned several subsequent works (not to mention an entirely new canonical universe numbered Earth-311): Marvel 1602: The Fantastick Four, Marvel 1602: New World, and Spider-Man 1602.