The Mythical and the Mysterious: Mythic and Occult Adventures for the Pathfinder RPG

Characters in the Pathfinder Roleplaying Game are capable of many amazing feats and abilities. As they rise in power, they become in some ways like fantasy superheroes, able to cut down mighty dragons with a few swings of a sword or to cast devastating spells.

You can develop characters like this with just the Core Rules, and the various supplemental books add all kinds of new abilities to achieve new and unique characters.

Mythic Adventures for the Pathfinder RPG 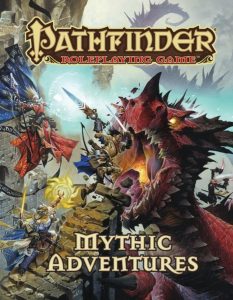 Mythic Adventures provides gamemasters and players with a way to power up their already powerful Pathfinder games. It introduces a new way for characters to gain abilities that aren’t tied to their regular class abilities acquired through gaining experience points and levels. Instead, by performing deeds of great renown, the characters can become “mythic”.

As with any add-on to Pathfinder, Mythic Adventures is not a book that will be to everyone’s tastes. However, if you like the idea of characters capable of world-shattering deeds, it can be a good way to add a different spin to your regular Pathfinder games. Unlike a book like the Advanced Player’s Guide, Mythic Adventures isn’t a book you are likely to use in every campaign, but it may serve to make the ones you do use it in extra memorable.

But super-powered characters aren’t the only way to modify your Pathfinder game. Perhaps you want a game with more mystery and a greater sense of the unknown. Magic is quite ubiquitous in Pathfinder, and as a result, can start to seem kind of normal. Occult Adventures is a book designed for making your game a little more strange and mysterious.

Occult Adventures for the Pathfinder RPG 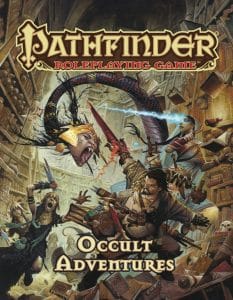 In Pathfinder terms, the “occult” covers unusual magic and supernatural powers that even most wizards know little about. In the Core Rules, magic is divided into two main branches: arcane and divine. Occult Adventures introduces a new branch of magic—psychic magic—and six new character classes that use psychic magic in various different ways.

The book also contains numerous additional options for gamemasters to add into their games, from rules for chakras, to lay lines, and even a different way of looking at other planes of existence. There are also lots of new and unusual occult magic items.

The occult is something characters might encounter in only a single adventure in an otherwise non-occult campaign, or might form the basis for the entire campaign. Whatever use you choose, it can give a game a unique feel, making it stand out from other campaigns.

Pathfinder can be a very flexible game. While it can’t do absolutely everything, it can certainly cover many different styles. Next month sees the release of Horror Adventures, a book which will contain ways to amp up the fear factor in your games. But even though this book isn’t quite available yet, it doesn’t mean you can’t do horror in your games now.

With a bit of creativity, gamemasters can make small modifications of their own to the games to achieve a horror game, a swashbuckling game, a wild-west game, or numerous other possibilities. Some options may require a little more work than others, but with a bit of imagination, there’s a lot that is possible.

With a devoted gamemaster and eager players, every campaign can be unique. Pathfinder Mythic Adventures and Pathfinder Occult Adventures are just two ways to achieve that.

Both books are available for purchase at a really good price: Mythic Adventures | Occult

The Glass Cannon Podcast: Episode 58 – How Della Got Her Groove Back