Doctor Strange might be the one getting his own movie, but there are tons of other magic users in the Marvel Universe. Sure, the MU might be dominated by mutants or tech-based and animal-based superheroes, but that doesn’t mean there hasn’t been a deep mine full of cool magic users. 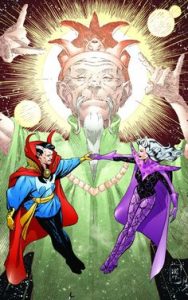 Clea is too often spoken of only as Doctor Strange’s lover, a reference that immediately makes me giggle as I think about Will Ferrell and Rachel Dratch making out in a hot tub. But Clea was a magic user on the level of Doctor Strange.

A Faltine and the daughter of an affair in the extradimentional Dark Dimension, Clea was a legitimate heir who could challenge the rule of Dormammu. After his battles in that dimension, Doctor Strange returned to Earth with Clea, and she lived with him in his Sanctum Sanctorum, becoming his lover and disciple, presumably on the strength of his alluring mustache. It’s comics, don’t think about it too much.

Clea can generate magical bolts of energy, conjure objects, and teleport. She has telekinesis, can control minds, and cast illusions. Basically, she is able to match any spell performed by her former mentor and lover, Doctor Strange, except Clea performs her magic backwards and in high heels. 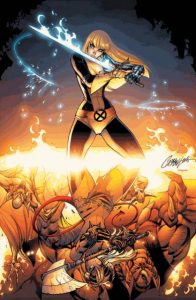 Illyana Rasputin was born in Russia, the youngest of three mutant siblings. As a child, she was saved from a runaway tractor by her older brother Colossus, just before her brother was recruited to the X-Men.

At age six, Illyana was kidnapped by the demon Belasco and taken to Limbo. While there, Belasco turned part of her soul into a Bloodstone, giving her great potential for power and allowing him to control her. Illyana returned to Earth, yet had spent years in Limbo while only mere moments elapsed on Earth.

Her mutant power is the ability to create “stepping discs,” which allow herself and others to teleport across interstellar distances or through time. But Magik is also the sorceress supreme of the Limbo dimension. Her power is focused through a Soulsword and she takes on a Darkchylde appearance when she uses dark magic. 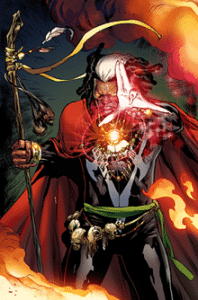 Jericho Drumm was educated in the the United States, only to return his native of Port-au-Prince, Haiti.  When he arrived he discovered his brother Daniel Drumm was dying from the spell of a rival bokor who served an evil serpent god. But before he died, Daniel made his brother vow to take up the mantle, and before long Jericho had a mastery of voodoo that was far beyond even that of his brother.

Brother Voodoo is a houngan who masters the white magic of voodoo. This gives him powers of pyrokinesis, flight, energy projection, hypnosis, teleportation, elemental manipulation, and spirit possession, among other abilities.

For a brief time he had the mantle of Sorcerer Supreme. If you want a little more lore about Haitian voodoo, you can go here. 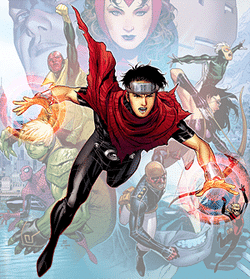 In 2005 Marvel published the Young Avengers. Among them was the character Wiccan, who is thought to be one of the genetic reincarnations of the Scarlet Witch’s imaginary twin sons. That sentence doesn’t make any sense to me either.

Wiccan’s spellcasting is related to a reality warping power stemming from his mutant ability to wield Chaos Magic like his mother, although Wiccan patterned himself after Thor, largely limiting himself to flight and lightning based spells. But Wiccan is capable of a variety of feats, including tracking others, illusions, force-fields, mass teleportation, telepathy, telekinesis, portal creation, clairvoyance, mind control, concussive blasts, enchantments, astral projection, pyrokinesis, and telekinetic force beams, although Billy must be able to hear his spells for them to be successful.

The Lords of Hell-Lords desired to sire a child with a human woman for use as a gateway for power.The demon Satan took human form and keeping his true identity a secret, he married young Victoria Wingate. Daimon was born a year later with a strange pentagram-shaped birthmark on his chest. His sister, Satana, was born when Daimon was three.

Daimon however hoped to become a priest. But shortly before being ordained, he received legal notification of his inheritance of his father’s house, where he found his mother’s diary, learning the truth about his birth. At that point, Satan directed him telepathically through an interdimensional passageway to his domain, Hell, where he pleaded for Daimon to serve him. But Daimon decided to dedicate himself to fighting his father’s evil.

As the Son of Satan, he possesses supernatural powers derived from his “Darksoul,” a demonic counterpart to his human soul, which physically manifested itself in the pentagram-shaped birthmark on his chest. This grants him superhuman strength as well the ability to sense the presence of the supernatural and teleport between mystical dimensions. He can project “hellfire” from his trident. 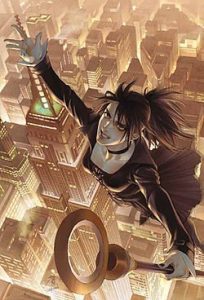 Marvel had a hit in 2003 with Runaways. One of the introduced characters was Nico, a young girl of magical birthright that was discovered by Nico when she saw her secretly villainous father sacrifice a human in a ritual. Understandably, Nico ran away.

Nico has the magical Staff of One that absorbs into her body, but reappears when she bleeds. She also now has a magical arm that replaces an arm she lost in an accident. She has incredible power, but she’s untrained.

One quirk is that she can’t repeat the same spell twice, so she’s always experimenting with different languages or phrasing. 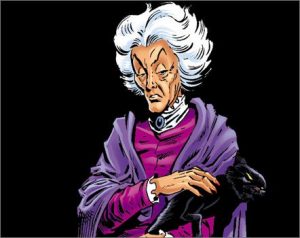 Agatha Harkness is old enough to remember ancient times. As a young woman she wandered into a community of centuries-old witches, ultimately becoming the most powerful sorceress in Salem. Much later she was approached by Reed and Sue Richards to be the many of their newborn son, Franklin. Then there was some weird stuff with the Scarlet Witch because everything is weird with the Scarlet Witch.

She has a cat familiar named Ebony. She also has a vast knowledge of mystical spells and incantations.

Apologies to Doctor Druid, Modred the Mystic, and so many more who didn’t make the cut on our humble list of 7. Marvel really does have a treasure trove of magic using characters. Although Doctor Strange might be the only one who gets his own movie, we’ll know feel good in knowing the deep cuts.

Recap and Review of Marvel’s Agents of Shield Episode 406: The Good Samaritan

Friday 5: The Nerd Culture Highlights of the Week

Getting Started with Magic: The Gathering Arena

Our 7 Most Helpful Marvel Cinematic Universe Articles of…

Comic Characters You Should Know: Nightmare, the Villain of…