By Clave Jones On Apr 7, 2018 Last updated May 6, 2018
Share TwitterReddItPinterestFacebookEmailPrint

There was a discussion in the Nerds on Earth Slack channel about our favorite and least favorite Kickstarters. I researched the business trends and realities of Kickstarter as it pertains to board games, and I hate to let an easy lede slip past me, so here comes the article.

We’re in a board game renaissance and us nerds can thank Kickstarter for a large portion of the decade long growth in the board gaming industry. Over $200,000,000 has been funneled to Kickstarter by nerds who’ll plop downs hundreds at a time to purchase the experience of the latest and greatest board game arriving at their doorstep 18 months later.

Kickstarter also has allowed more board games to be made than ever. For several years it was the go-to place to finance a passion board game project, allowing hundreds of indy publishers to bring a game to market. But as surely as the sun rises in the east, larger publishers realized they could leverage Kickstarter as a handy pre-sale portal to gauge the demand of the market for a sequel, leading to individual board gaming Kickstarter projects cresting the million dollar threshold.

Ironically, Kickstarter–a digital platform–has allowed analog to thrive. Meanwhile, these modern board games are well-designed with ever more elegant mechanics, further increased by the fluency of many gamers and game designers, who treat board gaming as much more than a casual or escapist hobby. This is serious business to many, which has pushed creativity and driven publishers to craft careful and savvy Kickstarter campaigns that are driven by cutting-edge marketing research to pique the interest of potential backers.

Yet the board game industry is shifting as it relates to Kickstarter. Let’s discuss two opposite market forces that are creating a great divide in Kickstarter.

Some publishers are going Kickstarter only. In fact, several of the largest Kickstarters ever are for games that will never make it to retail. So unless you pony up on Kickstarter, you’ll never be able to buy these games at your FLGS, so if you miss the campaign, your only atonement is to hit up eBay later.

Publishers of BIG, miniatures-heavy games in particular are going Kickstarter only as the addition of yet another sculpt to the box is an enticing stretch goal that drives the enthusiasm for the campaign. In fact, over 80% of the highest funded games feature miniatures.

Batman: Gotham City by French publisher Monolith recently hit the Top 10 Kickstarted games list. Monolith was upfront about there being no trade release for the game, so 19,302 backers took the Kickstarter-only plunge, knowing no future copies would ever exist in game shops.

This creates a rather interesting effect. Despite the online attention the quick 30-day Kickstarter campaigns receive, the games have zero long tail exposure. No one will ever discover them by walking past them on a shelf, unless the shelf is in your Kickstarter-obessed buddy’s garage, that is.

So these multi-million dollar games are simultaneously known and almost wholly unknown, if that makes any sense. There is a 20K person strong subculture that dropped a ton of dough on the game, so they are understandably passionate about it, yet there is no avenue for the game to discover a broader audience beyond that.

For some games in particular, this may be by design. Kingdom Death: Monster 1.5 is the #1 Kickstarted board game of all time with 19,264 backers pledging an average $643.33 a person that tallies up to a mind-boggling $12,393,139. But it must be said that even by the most generous terms, the game expresses gross imagery, that I won’t even dignify by going into. Kingdom Death: Monster is the kind of game where I’d need to quickly cover my young daughter’s eyes should they walk past it on a store shelf, making retail an unlikely strategy for the game anyway. No wonder they are Kickstarter only.

So some publishers are creating very specific types of games for very specific audiences and using Kickstarter as their sole vehicle. But to be clear, despite their well crafted campaigns and hefty financial tallies, these games are very much a subset, a “walled garden.” While 20K might seem like a lot of gamers (in fairness, it is), a successfully Kickstarted game like Boss Monster parleyed their Kickstarter success into a successful run in retail, selling hundreds of thousands of copies later in game shops.

While some publishers are going Kickstarter only, others are abandoning Kickstarter all together. Ninja Division is the latest to announce leaving Kickstarter. But it should be said that Ninja Div is a suspect example as they are a company that has drawn criticisms for shipping delays, the unforgivable sin among KS devotees.

But Stonemeier Games has abandoned KS and they have an impeccable, squeaky-clean reputation. In fact, not only has Stonemeier won multiple gaming awards–including game of the year support for Scythe–but Jamey Stegmeier, co-founder of Stonemeier, has literally written the book on crowdfunding board games. Yet he walked away.

Publishers like Stonemeier understand the exposure that Kickstarter can offer, but have determined that even greater fan engagement and awareness can be facilitated through alternative vehicles like building a robust mailing list for example. In large part the benefits of Kickstarter can be replicated in other ways, in other words.

Plus, many publishers want to escape the negatives of Kickstarter. Logistics is one. Us humans like to besmirch a “middle man” but there are times where a middle man like a distributing company is incredibly helpful. In the case of a Kickstarted board game with 40,000+ pledges like Gloomhaven, that means 40,000+ individually shipped orders. That’s crazy inefficient when a distributor can pack thousands in a warehouse and use their shipping infrastructure to deliver them to retail. 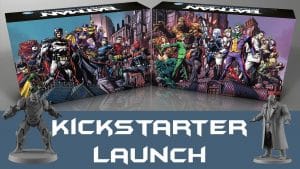 But as is the trouble of our complicated times, it’s online toxicity that is forcing many publishers away from Kickstarter. A subset of Kickstarter devotees are incredibly entitled and create a mountain swell of customer service interactions as they demand ever more and more from Kickstarter campaigns, forgetting that there are real humans trying to run a small business on the other end. Nearly all of the companies who have left Kickstarter have listed virulent online interactions as a key reason.

So business strategies regarding Kickstarter are evolving quickly in just a few shorts years. While some are taking an “all aboard” approach to Kickstarter, others are jumping ship. Some like CMON are in the middle. CMON–who owns several spots on the Top 10 Kickstarter list–still uses Kickstarter, but has announced several substantial changes to make their games more friendly for a future run in retail, trying to capture the best of both worlds.

I presented this as an either/or approach, but like most things, the truth is more nuanced and complicated than that. The chasm between Kickstarted games and non-Kickstarted games isn’t typically as wide as the most prominent examples we used here would lead us to believe.

Sure, there is separation, but it’s not so much the Grand Canyon as it is Gooney Otter Creek, where I used to play with my cousins as a kid. Heck, once my distant cousin Jackie got a good run and jumped clear from one bank over to the yonder. Of course, he also came up short a couple of times and got wet halfway up his britches legs, but the point is that Kickstarter vs. retail isn’t a chasm that can’t be crossed.

Many like Chris O’Neill of Brotherwise Games is going back to Kickstarter for their next one years after Boss Monster, essentially deciding game by game which launch strategy to use. I suspect more publishers will adopt this approach as the industry changes. Thankfully, Chris O’Neill and Jamey Stegmeier are not just known as talented game designers, they are also known as thought leaders in the board gaming community and give back often. That means others will look to them for leadership as these shifts occur.

As Chris from Brotherwise says, they are “looking for strategies that let us use crowdfunding to complement the publisher-distributor-retailer symbiosis, not disrupt it.” What does it mean for us? Well, more games that ever are coming out, but we’ll need to pay attention, as some of them will be exclusive.

All By Myshelf: My Top 7 Solo Board Games

Terror Below: Board Game LIVE on Kickstarter NOW