Pathfinder 2.0: Erik Mona on if Golarion Will Suffer a Cataclysmic Event

Will there be a huge event that marks the change to Pathfinder Second Edition?

Nerds on Earth burned a spell slot to cast Command on Erik Mona, Publisher at Paizo, maker of the Pathfinder RPG. Compelled to answer our questions, Erik was interrogated thoroughly, then released (mostly) unharmed.

What follows is part 2 of a three part interview that is in audio form here, as well as in written form below:

And, now, here is Erik Mona, speaking on Pathfinder Second Edition and what that means for the World of Golarion.

Clave: When you did Starfinder you created the “gap”, which was brilliant. It’s like, “There’s some kind of mysterious amnesia we all have.” And that allowed you to advance that space setting forward in time.

Clave: The “gap” was a great way to handle that sort of thing. When you go to the second edition of Pathfinder, is there going to be some sort of event? Doomsday Dawn: Does that point to something, some big catastrophe that’s happening in the setting?

Erik: Not if the player characters are successful. What Doomsday Dawn is all about is, in the very beginning of Pathfinder, in fact so early on that we were publishing our adventure modules under the Game Mastery brand, which actually started prior to the Pathfinder Adventure Path started in 2007. But we started doing Adventures in 2006 and one of those adventures was called Entombed With the Pharaohs. It was set in Osirion.

It was written by Michael Cortes, who’s a great and frequent freelancer of ours. He created this thing called the Aucturn Enigma. Aucturn is sort of a Neptunian style planet on the far stretches of the solar system. It is infused with powers of the dark tapestry, which is alien, the dark spaces between the stars. Kind of where our unknowable cosmic horrors come from in the Pathfinder world.

He created this countdown essentially. These countdown clocks that were counting down to the year 4718 in Pathfinder’s world. It was just as kind of an Easter egg. We put a couple of things like that into the setting that were pointers to things that we might, future versions of ourselves or whoever replaced us might be able to go back and say, “This was the plan all along”. The Aucturn Enigma was one of those.

As we got closer and closer to the idea of doing a second edition of Pathfinder, I think it started almost as a little bit of a joke or what. But we were like, “You know what? Let’s use that thread and let’s do it. Some people are going to be joking that second edition Pathfinder is the end of the world anyway, so let’s do it. Let’s sort of lean into it. The evil brain collectors are coming to steal everybody’s brain, unless the heroes can stop it.”

The idea in my head it’s always been like, they’re coming to install your worst nightmares about what we might do with second edition. By your characters being victorious in the adventure, and by you providing us with the feedback that’s important to you, we can make sure that the version of the world and of the game that we save is one that the players really want.

What that Doomsday Dawn thing is, is it’s seven short adventures. We’ll be doing play tests for it starting very shortly after GenCon in little quick bursts where everybody plays the adventure. We’re probably going to do some streaming out of the office of us playing the adventure. We’ll have surveys for all seven adventures, getting people’s feedback in terms of, “Did this power work the way that you wanted it to? How long did your character survive? Was it fun?”. All that kind of stuff. In addition to the feedback we’ve always taken which is kind of that message board based, “Tell us what you think”, there’s going to be a lot of surveys that are geared toward really getting into the nuts and bolts of how specific parts of the system work.

That whole Doomsday Dawn, Aucturn Enigma, “What are the clocks counting down to?”, that’s all going to be, I wouldn’t say 100% tied up because we’ll want to come back to those themes I think later. But all that Doomsday Dawn stuff is self contained within the 96 page Doomsday Dawn play test adventure. That kind of in some ways is our gap, if you will. But it’s what the players actually play through.

What we will do, I mentioned the countdown clock and 4707. Basically the way that we do things with our timeline is that the last two digits of the year in Golarion correspond to the last two digits of the year in Earth. When we started in 2007, the year in Golarion was 4707. Now that we’re in 2018, the year is 4718. We can track the passage of time. One of the things that will happen in the second edition era is, we will bring the timeline formally up to date with 4718. In doing that, we will be revisiting all of the first edition adventure paths, and trying to sort of say, “If the players completed these things successfully, what implications does that have on the world itself?”.

The best example is probably the Wrath of the Righteous adventure path, which is all about closing the World Wound. These gates to the abyss that are causing this looming terror to the north of the campaign setting. If we say that the adventurers’ activities in that adventure path are canonized, well then the world wound is closed by the time 4718 rolls around. If you haven’t been paying too much attention to the setting since, let’s say 2007, and you’ve come to the version that we’ll be publishing in the era of second edition, you might say, “Wow. An awful lot has changed”. But almost all of the major changes that we’re going to be implementing into the setting are the result of PC actions within the context of the adventure paths.

We’re having our time of troubles or our gap or whatever. But it’s simply codifying the successful activities of adventurers who have been with us since 2007. 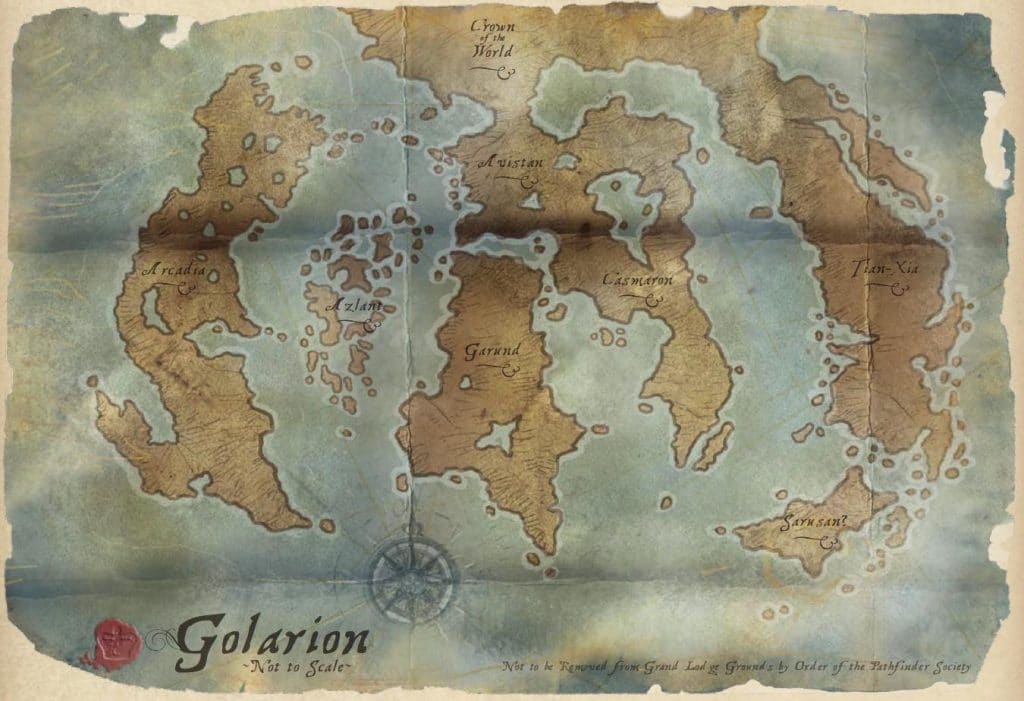 Clave: I’m in. You’ve got me, so let’s switch gears. A good friend, one of the guys on the Called Shot Podcast, plays a goblin character actually. Technically goblins are playable now, but they’re not…core. In the second edition they’re going to be core…it’s not races, it’s ancestries, right?

Clave: What are going to be the differences in goblins that step them closer to the center of the playable ancestries? What are you going to do with that?

Erik: Well, we have added a whole bunch of abilities and things that goblins have to bring them kind of up to speed with the core options as well. Instead of just being like, “Elves have 20 options, but if you want to play a goblin here’s three”. We’re bringing them up to part in terms of what they can do. We’re also talking a little bit about, within the context of the goblin section of the playtest book, we’re talking a little bit about, “What does it mean to have a non evil goblin?”.

Erik: I think a lot of people’s impression of goblins right now is that they’re pyromaniacs, they hate dogs, and all that. I think that the book goes to some length to say, “Yes. That is true of goblins in general. But there are exceptions to that rule, and there are increasingly some goblins who are trying to interact with society a little bit more than just trying to light it on fire and eat their dogs and things like that”.

I will say that we are also working on some sort of in world stuff about, if there are now goblin adventurers, where do they come from? A lot of people have been really desirous for that. It’s not so much I think in many cases that they’re skeptical about the idea. They just kind of want, or maybe they are, but they want a little bit of guidance as to, “Wait, what do I do? How do I keep this player from not disrupting the entire group?” I think that’s good questions when it comes to evil characters in general. But I think that there are some folks who really, as much as we could help them on that, they would appreciate.

There’s going to be some things that are happening within the context of Pathfinder society. There are going to be some things happening in other vectors as well for folks kind of looking at, “Okay. My impression prior to this edition was maybe that if a goblin comes into town, they’d get arrested or killed on sight. Why is that not the case?” We have some thoughts there. Whether they’re going to live up to everyone’s expectations or not I think is going to be an individual question. I think some people just don’t seem to want goblins.

Erik: They are definitely in the playtest, and we’re going to be listening to what people have to say, and try and figure out how to do it. I mean, it’s an interesting question because whenever we do goblin oriented stuff at GenCon or Free RPG Day, or really whenever, people are very enthusiastic. They love playing that stuff. We’re just going to have to figure out how to make it work, and if it’s worth it.

Erik: I think it is, but we’ll see. All part of the playtest.

All three parts of our three part interview, as well the entire interview in audio form here.

Pathfinder 2.0: Erik Mona on Leaning into the Golarion Setting

Review of Secrets of Magic for Pathfinder 2nd Edition