I am not smart enough for the Wendake board game, but you may well be!

Picture it: the year is now 1756, and you find yourself in the midst of the Great Lakes region of what is now the good ol’ USA. You are about to embark on a seven year journey as the chief of one of these tribes of the Huron Nation, playing through the different aspects of everyday village life. 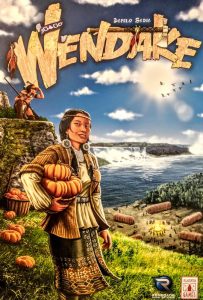 You and your fellow players (or, to be game-specific, the other chiefs) will gather crops, hunt, trade, partake in rituals, and wage war with each other over territories.

I would like to start this by stating, up-front, that the Wendake board game is an actual behemoth. My board-game-anxiety is coming back in full force. I have never in my life seen so many boards, maps, player pieces, tokens, markers, tiles, and cards–and to make things even more complicated, many of them are marked with a type of game-specific symbol language that I’m sure I will never be able to comprehend. My urge to quit bubbles up inside me. Calm down, I tell myself. Surely it’s not going to be that hard.

Nerds, this is not a quick-to-learn game. This is an undertaking, not for the faint of heart. I have played with my reliable game boarding buddies, I have played with my game-loving husband, Adam (much to his delight), and I am still working at mastering this game. It is no easy feat. (Board Game Geek estimates Wendake’s “weight” as 3.55 out of 5.) 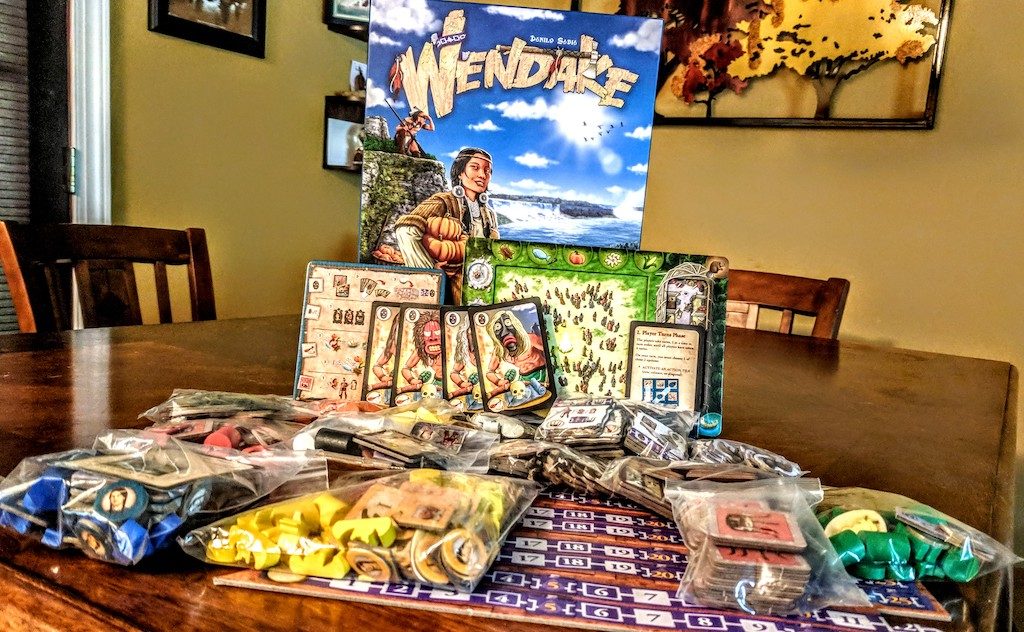 Wendake Board Game: Turtles, Canoes, and Trading with the White Man

When I say that this game is a behemoth, I mean it. The box is sizable, and brimming with stuff! If you don’t believe me, take a peek at the two full pages of the instructions dedicated to “Components”. For a novice like me, the sheer amount of things to keep up with is pretty daunting, but to you veteran gamers out there like my friend Wes, digging through and organizing this utter deluge of gameplay items is a dream come true.

Where my reaction to seeing the loaded box was more of a terrified “Aah!”, his was an excited, mesermized “Oooh!” If the phrase “a place for everything, everything in its place” appeals to you, check this game out! You’ll be in logistical heaven.

As a Native American chief, you will need all these various items in order to manage (and score points for) your tribe’s economy and military, along with the ritual and ceremonial aspects of daily life. Each round played is considered one year of seven total years that players act out in Wendake.

You have hunters and gatherers, warriors and fishermen, all at your disposal to claim territory and earn resources throughout the game. The breakdown of action, turn order, and transition from year to year is laid out (beautifully!) in the 20 page instruction manual that comes with the game.

As big and intimidating as this game may seem, the instructions are just as complex, more than adequately detailing the very delicate organization of the maps, player boards, score tracks, and other components. This booklet is your best friend. Treat it well and keep it close, because you will be referencing it quite a bit.

Each of the seven years is split into two phases: the Player Turns Phase and the Restore Phase. During the player turns phase, two options exist–follow the directions on a chosen action tile or claim your spot in the turn order for the next round.

When choosing to activate one of the action tiles, a little bit of strategy comes into play; when a tile is chosen, the other three that will be selected throughout the year must fall in line with the original choice, either by row, column, or diagonal. Some tiles show single actions, while others may include two or three separate actions. The action tiles that give multiple directions for one turn must be completed in the order as shown on the tile.

The restore phase begins when each player has finished their fourth action, and signifies the end of one year. The restore phase includes updating the player order to the order chosen during the round, flipping used action tiles and cycling them down to replace the top row with the bottom row from the previous turn. And then… repeat and enjoy!

War: What Is It Good For?

Actually, It’s pretty good for defending and claiming territories and, thereby gathering resources. Kind of a staple in the game. Each player has warriors for defense, along with hunter tokens for trapping beavers (which can be turned to skins and traded) and woman tokens that can be used to harvest crops.

So, you will eventually reach a point where the board just ain’t big enough for the both of us, and you want a territory that your fellow player has claimed. Battle in Wendake can only occur when a player’s warrior is in or moves to a territory that is occupied by another player’s natives; when you attack the opposing warrior with your warrior, both the attacker and the attacked are considered injured and are sent to recover in the longhouse.

These opposing warriors are known as guards, and must be attacked first when present. Your warrior can also attack the hunters and women that claim the productive areas on the map. If your warrior attacks one of the hunters or women, they are sent back to recover in the longhouse, while you take the vacant spot with one of your natives. Et voilà! You have won yourself a territory!

Wendake Board Game: A Few of My Favorite Things

As is hopefully evident by this review, Wendake is so complex and well-organized that I am certain that I could play through it ten more times and still discover things that I hadn’t caught in previous games. There could be a class in deciphering the messages on the progress tiles alone. Not surprisingly to me, I lost, and lost badly.

Being a virtual representation of the inner workings of a society, this game has a metric boatload of different things to keep in mind and tend to, and rightly so.

Just take a deep breath, hold your instructions close, and take your time. Remember that golden rule of gaming, where the first game never counts? I’m amending it to “the first three,” just for you, Wendake. Now, forgive me, I’m going to go to my longhouse and recover, along with my hunters. We have taken quite the beating.

You can order Wendake straight from Renegade, from Amazon, or better yet, ask for it at your FLGS.

[Disclosure: Renegade Game Studios provided Nerds on Earth with a copy of Wendake in exchange for an honest review.]