After last week’s Morgan backstory, are we finally going to get a merger of the storylines into one plot and the resolution of the lingering question that has been out there for everyone: is Glenn really dead? This week is The Walking Dead episode 604: Now.

While on top of the fence, Deanna overhears Michonne tell Maggie that Glenn is unaccounted for. Suddenly, Rick comes running in with a horde of zombies behind him. And we get the feeling that for the first time, Deanna is staring down what the new reality is as the horde gathers at the fence. 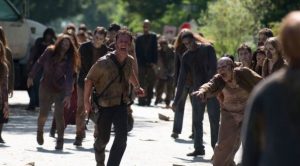 Everyone from Alexandria is suddenly thrust into the deep end, completely scared, as Rick gives a pep talk, asking them to hold together, that everyone will be coming back and that they need to do everything they can to be quiet and don’t draw them inside.

Aaron has Rick’s back and also admits that his pack and photographs are the reason that the Wolves came looking for Alexandria. Deanna walks away and Jesse decides it is time to go drag the dead body out of her kitchen to the body dump site. (Post zombie apocalypse, there is no way Alexandria doesn’t wind up an Environmental Protection Agency Superfund site.) Rick wanders up and says they shouldn’t bury killers inside the walls, that they should just wait.

But facing the reality of what is happening, the order of Alexandria falls apart into chaos. Deanna’s son makes a pretty impassioned speech about the need for order and stability and supporting one another. The townsfolk respond and put back the food that they were raiding. Deanna is a proud mama. That or she knows she can steal Spaghetti Os whenever she wants and these fools aren’t getting any. And not the plain kind either. The kind with sliced franks.

Aaron sees a new memorial wall, listing the dead. We see Glenn’s name and Aaron goes to find Maggie, who is clearly preparing to go get her husband. He smartly understands her tactics and pushes her to admit that she can’t go alone. He volunteers to help her, saying he knows a safer way out.

Deanna suddenly comes to and quickly starts mapping out plans for crops, an education center, and electricity, before adding the phrase from Ovid in Latin, which says “Dolor hic tibi proderit olim” which roughly translated is: “Be patient and tough; someday this pain will be useful to you.”

Deanna then discovers that her son is full of crap, as he has raided the pantry, proving himself to be a massive jerk. (What is more disappointing? Discovering that you can’t survive an apocalypse or that you kid is a grade A terrible human being?)

Carl and his teenage angsty rival have a conversation about Enid that was really about more. Then we get a full on sissy schoolyard fight that ends with the hilarious “I will tell your dad” threat.

We then get back to the Dr. Denise, who can’t seem to figure out what is wrong with a patient. Tara comes in and gives her version of the pep talk, saying that in this new world, you just have to deal with being afraid and can’t let it consume you.

Jesse then discovers a neighbor gone zombie, seemingly from having sliced her own wrists. She quietly puts it down as everyone in the street mourns. And then she gets a speech about how everyone has to see what life really looks like now, and how they all have to fight it. Everyone seemingly gets a speech in this episode. 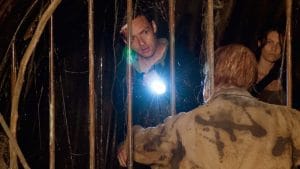 Aaron and Maggie then head into the sewers, which was his safer way in and out of Alexandria. Aaron can’t let her run solo so off they go, looking for Glenn. In moving a ladder that was stuck in the sewer, we get an über-gross poo encrusted zombie that nearly gets Maggie before Aaron gets free and saves her.

Aaron’s head wound needs stitches but he won’t leave her. When they get to the end of the sewer, Maggie freaks out a little. She reveals she is pregnant and that she is sad because she has burned Glenn’s last picture and she won’t ever know what happened to her husband. Aaron gives her a hug.

Denise then discovers a treatment for her sick patient and seems pretty proud of herself. And decides to go full on tonsil hockey when she meets Tara.

Rick and Pete’s kid have a little conversation about how Enid may be over the wall, out there in the herd. Rick goes to find Carl, after they have a moment where he asks Rick to help him learn how to shoot. Rick gives him a gun and he practices targeting it at a zombie.

Sam – Pete’s younger kid – and Jesse have a conversation as he is clearly more than a little traumatized by the recent events happening in his house. Meanwhile Deanna gets bloodied trying to kill a zombie, not understanding that it has to be a head shot. Deanna confesses that she wants to live and she wants Alexandria to stay standing. She says she needs Rick to help her lead if he doesn’t think her dream is a crazy one.

Later in the evening, Aaron and Maggie are on the wall, looking for signs of what has happened, when Maggie does down to the memorial wall and takes his name off, as Aaron makes a pitch for having the baby named after him.

Rosita is relieved off guard duty by Spencer, who volunteered to take Carol’s place. Rosita thanks him for his work in taking out the driver of truck. He then eats some more stolen food.

Rick then decides that the best time to have a long conversation about the dead zombie bodies is the middle of the night. Jesse then tells him to live right here in this moment, as he shares that he heard about her little speech. She wants assurances about a future and they make out in the garage.

Deanna then stares at the horde through the fence and then begins to shake it, making noise. And blood drips down the wall.