Lists of 7Board GamesRoleplaying Games

The 7 Best Board Games for Solo Play

If you have an hour of downtime, why wouldn’t you play a video game? Video games have zero setup, are awesome, and with the ubiquitousness of mobile, you can take video games anywhere. But it’s occasionally nice to have the tactile feel of a board game. It’s a nice change of pace to shuffle the cards or hear the satisfying roll of the dice.

So if you have an evening to chill and you are Home Alone, below are the best board games for solo play.

7 Best Board Games for Solo Play 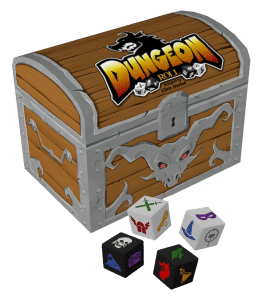 7. Dungeon Roll – Dungeon Roll allows you take the role of a daring hero who seeking glory by delving into a deep, dark dungeon in search of loot. It is a simple, enjoyable game that can be setup and played quickly. The box for Dungeon Roll is shaped like a treasure chest and it contained all the hero cards, dice, and tokens you need.

Dungeon Roll has you press your luck to get more and more XP. It’s a light, family-friendly, fantasy themed game that works great for solo play. As a bonus, Watch it Played has a video tutorial. You can get Dungeon Roll here for less than 20 gold coins.

6. Marvel Legendary – Sometimes you need a little superhero-punch-a-villain-in-the-face action. Or is that just me?

Marvel Legendary is a card game with the premise that SHIELD has gathered heroes together to battle some big bad. You can get every expansion under the sun, meaning you have a good shot at playing your favorite Marvel comics hero. We have a full review of Marvel Legendary.

But while designed as a co-op game, Legendary plays well solo. Check it out here. 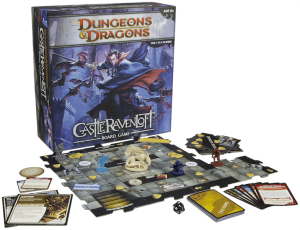 A sinister evil lurks in Castle Ravenloft and only the bravest of heroes can survive the horrors within. Each player selects a hero; a ranger, rogue, warrior, cleric, or wizard. Players then explore deeper into the castle by turning over new tiles.

Of course, it’s never that easy, as when a new dungeon tile is revealed, it only serves to reveal new monsters to fight! Slain monsters reward the players with treasure, and experience points, allowing them to level up, which should be the goal of all of us humans.

4. Zombicide – Make no mistake, Zombicide is best played with friends, as that is what elicited the most hoots and groans, but that doesn’t mean it’s not fun to play solo (or to spend the time painting the Zombicide miniatures).

The concept of Zombicide isn’t advanced metaphysics; it’s just killing zombies. But it’s a good time. Our full review of Zombicide is here. You can pick up the season 1 base game here. 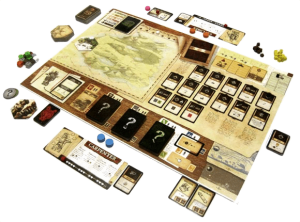 3. Robinson Crusoe – But you are a thinker, not a zombie masher, you might be saying. Well, if you want a game to challenge you (while also giving you a beautifully realized theme), then look no further than Robinson Crusoe.

Taking inspiration from the Daniel Defoe classic novel, Robinson Crusoe is a game where it’s simply fun to read the flavor text. Players are on a deserted island and play the parts of shipwreck survivors. The game faces you with the challenges of building a shelter, finding food, fighting wild beasts, and protecting themselves from the elements. You build walls, domesticate animals, construct weapons and tools, all in completing game objectives.

There are hundreds of event cards and hundreds of object and structure cards that can be used during the game, and fair warning, you won’t win this game. It’s challenging. It’s frustrating. It’s also immersive and amazing. Who said surviving shipwrecked on a island is supposed to be a trip to Starbucks anyway?

It plays great solo. Inventory is a little low right now, but you can find it here. 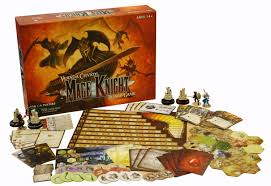 2. Mage Knight – Mage Knight is currently #9 on Board Game Geek, meaning that it is seen as the ninth best board game of all time, which has lead to numerous gaming awards.

Mage Knight is set in a wizard and medieval fantasy setting, as the title may have clued you into. Players are in control of one of four powerful Mage Knights tasked with exploring and conquering a corner of the Mage Knight universe under the control of the Atlantean Empire. You must build an army, fill your deck with powerful spells and actions, explore caves and dungeons, and eventually conquer cities.

The box includes cards, tiles, tokens, and miniatures, so it’s fun just to set the game up. Mage Knight combine elements of RPGs, deckbuilding, and traditional board gaming, all while offering a fantastic soloing experience. The game is an investment, but it’s a hobby unto itself. Get it here. 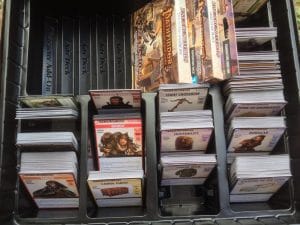 While it is no substitute for the glories of pencil and paper roleplaying games, the Pathfinder Adventure Card Game is about the closest you’ll get to aping the RPG experience with a deck of cards and some dice.

Players start in the town of Sandpoint and take the part of a fantasy character such as a rogue or wizard, each with different skills and abilities represented by the cards in their deck. The goal is to find and defeat a villain before a certain number of turns pass, with the villain being represented by its own deck of cards complete with challenges and foes that must be overcome. Players “level up” by acquiring allies, spells, weapons, and other items that go into their card deck and makes them stronger after each play.

It is an expandable game and plays through the Pathfinder storylines first written for the Pathfinder pencil and paper RPG. Adding a new expansion deck of cards gives a whole new storyline for your characters to play through. It’s a fun game and my go-to solo game if I have a rare quiet evening.