If you ask any comic nerd worth his weight in singles to free associate with the word Mjölnir, they will likely end up recounting verbatim Odin’s enchantment inscribed upon Thor’s legendary weapon:

Whosoever holds this hammer, if he be worthy, shall possess the power of Thor.

We’ve already surveyed a number of Marvel characters who did indeed prove worthy of Mjölnir and one who was only fooled (by Loki, no less) into believing he was, but today we’ll look at two more characters who found a few loopholes in Mjölnir’s rules.

For those unfamiliar with Red Hulk, this is not just Brace Banner with a dye job.  He is General Thaddeus Ross who, after years of hate towards and persecution of Hulk, was transformed into a Hulk himself by M.O.D.O.K.  As Red Hulk, Ross maintains his tactical intelligence while otherwise matching Hulk’s powers and abilities more or less.  He is the smart bomb of Hulks, and he uses his intelligence to take Mjölnir from the god of thunder himself.

In Hulk #5 (2008), the two titans clash and Red Hulk grabs ahold of Mjölnir while it is still in Thor’s grasp – exposing Loophole #1:  So long as Thor (or whoever proves worthy) maintain’s possession, the hammer can be manipulated by someone who is clearly unworthy.  It is like the classic “Why are you hitting yourself?” scenario: It is your hand, but I’m suddenly controlling it. 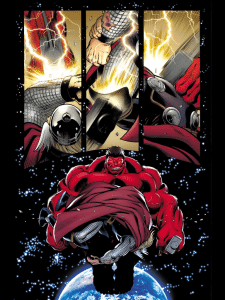 With the hammer in Thor’s possession and also in his own, Red Hulk leaps into space and exposes Loophole #2: In zero gravity, anyone can wield Mjölnir.  This seems to suggest that the enchantment augments gravity and therefore requires gravity in order to work.

With Mjölnir now in his sole possession, Red Hulk proceeds to beat Thor mercilessly with his own weapon.  It is important to note, though, that Red Hulk does not become imbued with the powers of Thor.  The loopholes he takes advantage of do not negate the enchantment so much as they circumvent it.  To him, Mjölnir was no more than a bludgeoning melee weapon.  This is an important distinction; especially in light of the Superman’s moment with Mjölnir. 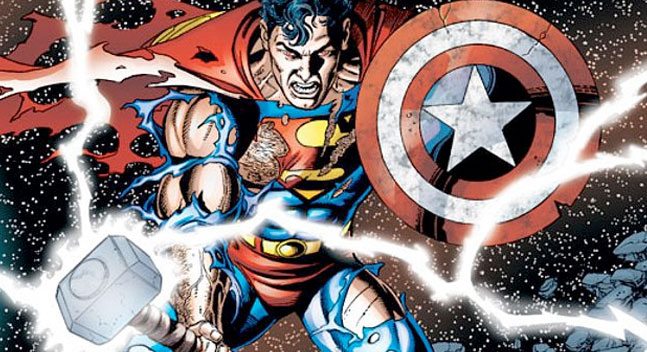 Regardless of whether you are for Team Marvel or Team DC, the picture above is extremely satisfying and even exciting.  If you haven’t read the issue wherein this moment takes place, you are immediately wondering how it came to be that Superman wields both Captain America’s shield and Thor’s hammer.

In 2003’s JLA/Avengers crossover, the villainous Krona builds a machine designed to merge the DC Universe and the Marvel Universe which would then cause a new Big Bang – effectively destroying both.  The Justice League and the Avengers unite in a desperate attempt to destroy the machine.  Most of the heroes from both universes fall, including the mighty Thor.  Superman successfully attempts to pick up the fallen hero’s weapon and uses it to deal a single blow to the menacing machinery – effectively halting the undoing of both universes. 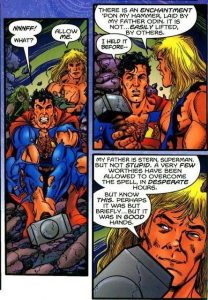 In contrast with Red Hulk’s experience with Mjölnir, Superman actually does feel the power of the hammer coursing through him when he picks it up.  Upon taking possession of it he exclaims, “Oh my Lord, the power!  Never felt so – Never would have guessed -”  He is nearly overwhelmed with the power of the thunder god!

However, in the aftermath Superman again attempts to lift Mjölnir without success.  Thor takes the opportunity to explain Loophole #3: In certain desperate circumstances, Odin can lift the restrictions of the hammer and allow someone who might otherwise be unworthy to wield it.

I like Thor’s statement that his father is “stern…but not stupid.”  He’s saying Odin is a stickler for the rule, but not so much so that he would rather watch universes be destroyed than allow the rule to be bent or even broken.  Odin is wiser than that.

So there you have it:  Two more wielders of mighty Mjölnir and the three loopholes required in order for the two characters to do so.  Red Hulk exploited the loopholes intentionally while Superman just kinda got lucky.  In less dire circumstances, Superman would prove unworthy of the hammer – and this despite the fact that Thor mentions that it was in good hands.  Surely Odin agreed…to a point.  This is substantiated even further by the fact that Superman is granted not just possession of Mjölnir but also the powers of Thor.  Set against Red Hulk’s experience, it is abundantly clear who more nearly meets the requirements of the enchantment and who just cheated to gain the advantage.