By Michael Adkins On May 11, 2016 Last updated May 11, 2016
Share TwitterReddItPinterestFacebookEmailPrint

Jason (Co-founder of Nerds on Earth and comic book guru) So for this week’s chat, we are going to be taking it back – in some cases WAY back – and talking about what was our first experience with the lore and magic of comic books! So, nerds, do you remember your first experience?

Joseph (A late bloomer when it comes to comics) I spent a long time trying to remember the first time I ever read a comic book. I couldn’t do it… I probably had some experience with comics when I was pretty young, but I never really latched onto them. I was way into the Marvel Action Hour that used to come on TV on Saturday mornings, but that was basically my experience with comics until Watchmen. 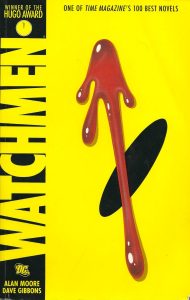 I remember seeing Watchmen in theaters and thinking, “This is on a totally different level. This isn’t just some swashbuckling hero story.” I bought the whole thing the next day and read it non-stop.

Jason Interesting that Watchmen was your first deep dive. It is always one of the best selling collected trades every year. But it is pretty dark story. How old were you when that happened?

Joseph 23, maybe… I think previously I just had it in my head that comics were serialized adventure stories for people who don’t go outside very much. It was pre-MCU (I think), so comic movies had only really gotten into the mainstream through the X-Men franchise, which were much more like serial adventure stories than later entries.

My timeline might be off there, now that I think about it, but the point stands.

Nash (About to be introduced to Chris Claremont for the first time) My first experience was in 4th grade. I stayed the night at a friend’s house and we walked to the comic shop a few streets over in town. I had never been there before and I was mystified! I easily got hooked and was way into collecting the trading cards in the Marvel II series! I focused way more on the cards than on the stories until I was in high school.

Jason Nash, I relate to your story. My dad is a science fiction guy from way back, so I think he had a few comics around but mainly I remember comics and ice cream were something we got when we were sick. And, of course, Spider-Man and his Amazing Friends was on television and the really old 60s cartoons were in reruns.

Nash I grew up on the X-Men show on Saturday mornings!

Jason But I was all in when I discovered that there was a spinner rack at my local drug store. At that point, all my disposable childhood income went from GI Joe to comics. It was the height of the Claremont era of comics and I LOVED it.

Joseph See, I just had to Google “Claremont Era…”

Nash Me too, Joseph.

Jason Guys – Chris Claremont is, was and will always be the best writer of the X-men. Period. All or most on Marvel Unlimited for your viewing pleasure! And there would be no X-men cartoons or X-men movies without the Claremont era. It is the stuff of legends for a reason!

Joseph Agreed. I just perused his Wikipedia page. I definitely owe whatever I loved about the X-Men cartoon to his influence.

Nash I’ll have to pick up some of those issues then! 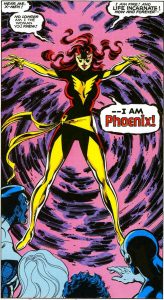 Jason No one will ever make a run as epic as his was in the time he did. Starter: Dark Phoenix Saga – maybe the greatest comic book story ever told. Still holds up and worth reading.

Nash I like the Dark Phoenix character.  I’ll have to check that one out now!

Jason So once I was hooked, I had to feed the need. First job was cleaning up my dad’s steakhouse after hours to buy my first long box. A comic shop near his college had a deal where you would buy a box, sight unseen for like $100. I spent a summer building to that prize and it was glorious.

Jason So Nash, you were all in at the shop level right away. Joe – have you had a comics shop experience yet?

Nash I was until out little shop closed down. We were such a small town I am surprised it lasted as long as it did. When it shut down it was the perfect storm of me being in high school and thinking I had “outgrown” comics etc. so I moved on to video games and such then.

Joseph Once or twice. I sort of tried to get into comics after Watchmen grabbed ahold of me. I picked up some compendiums, or annuals, or whatever they’re called when they put an entire run of a story into one volume. I grabbed V for Vendetta, The Dark Knight Returns, and Batman: Year 1 that way. My wife picked up a Hulk or two for me for a birthday that year.

Nash I still haven’t made the time and budget to get back into the comic game, which I want to…perhaps Marvel Unlimited is the way for me to go now.

Joseph I recently had a very good friend gift me a year’s subscription to Marvel Unlimited, and I’m LOVING IT!

Nash That’s a great gift! The gift that keeps on giving?!?!

Jason Comic shops have a tough road. Hard to stay afloat and with the digital threat, it is hard to compete. But there is something remarkable about a good comics shop. (There may be dust in my eyes…)

Nash Yeah. I need to get back into it! #SupportLocal

My parents are moving out and they said they found a bunch of old things of mine and my brothers, figurines and such. I am hoping my comic cards and comic books are in the stuff! It would be a great way to revitalize my collecting spirit!

Jason Marvel Unlimited is amazing. I would have to dig through boxes and boxes hoping to find the next issue or piece of a story, now so much is at our fingertips. My only complaint about it is that there isn’t a DC version.

Joseph If form holds true, DC will come out with a version a few years after Marvel, but it will be a mess.

The Batman comics will be alright, though.

Jason So last question: how do you get others hooked into comics? I work overtime with my nieces and nephew; I give them books but as they have gotten older, I definitely have given them graphic novels of new and old stuff. 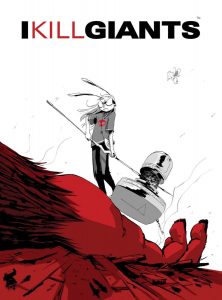 And this one is weird but when I have friends wrestling with grief, I give them the graphic novel I Kill Giants.

Nash Interesting! I’ll have to read that! not that I am dealing with grief, but I have never read it before and now I am intrigued.

Joseph I know for me, it was making the connection that comics aren’t always just adventure stories. For me what made the difference was being able to connect the events of a story (Watchmen) to themes and ideas that I was seeing and hearing about in other areas of my life.

Jason Definitely. As you get a broader basis of comic knowledge, it gets easier and easier to make good recommendations. I like asking people for television or movies they like and then finding good books for them. And comics can teach us things!

Nash I agree, I have always been able to connect themes to my own life, I am so into TWD and it has so much to do with the ethical dilemmas the characters face and how they cope.

Jason I think all of us can agree that comics are definitely not just for kids. (They never really were!) It is a genre of storytelling that I love and am always excited to share about. So, do what the cool kids are doing: read comics. And if you need recommendations, that is why Nerdsonearth.com is here!

A Recap and Review of Agents of SHIELD Episode 320: Emancipation