Adkins Usually we have a trio of nerds on hand for the weekly chat, but this week its just me and Ross. And you know what? I think we’re enough!

Added bonus:  We’ll have more room for the pics that are absolutely essential to this week’s chat topic:  Favorite comic book panels. With so many to choose from, which hold a special place in our hearts?

Ross, why don’t you kick us off with Selection #1.

Ross Well, I think any regular NoE reader will know that there is one panel I have pledged to feature in every one of my articles.

Look, there’s nothing deep here. There’s no theme or grand meaning hidden inside this panel. It boils down to the fact that this panel encapsulates everything great about the Atomic Knights: absolute bananapants craziness that is taken in complete stride by the main characters.

That, and I think the phrase “gives me the jim-jams” needs to come back into common usage yesterday.

Adkins I’ll buy into that movement.

How exactly does this panel feature in your articles?  And why the commitment to use it so?

Ross To answer those questions in order: Often extremely tangentially, and because I want to see if I can.

Adkins I have to be honest with you: I just pulled up your latest article on Wild Cards to see if I could spot it. Command-F is bringing me nothing and I don’t see it featured anywhere…so where did you hide it?!

Ross Well, now I have to retcon it in, but no, it isn’t in that one. There are a few, especially non-comic book articles, where even I can’t find a justification for it.

Adkins Ah. Well, as I’m now your primary editor I’ll have to keep an eye out for your clever insertion of this panel into your posts!

Ross So that’s my first (albeit silly) favorite panel. What do you have?

Adkins So when I first downloaded the Marvel Unlimited app, I asked Jason for some reading recommendations and atop his list was “anything Daredevil by Frank Miller.” So I got to reading and eventually hit #s 227-233 – An arc called “Born Again.” (Find it here via Amazon.)

That whole Daredevil arc absolutely bleeds religious symbolism from the titles of the individual issues (like Apocalypse, Purgatory, Saved, Armageddon, etc) to several of the panels.

It’s a really interesting arc in which Daredevil’s real identity is sold by his former secretary (for a little heroine, no less) and it eventually reaches the Kingpin who begins to absolutely destroy his life. It’s Matt at rock bottom; at his most defeated. He isn’t even in the suit for something like 5 consecutive issues, but when he reemerges as Daredevil it looks like this: 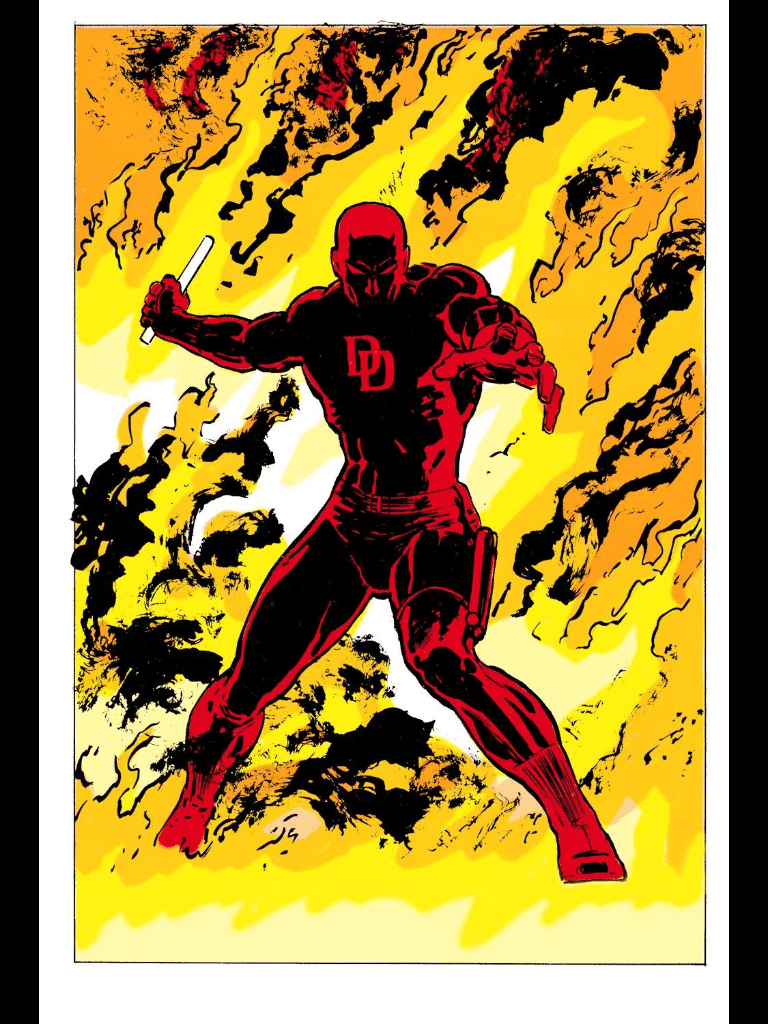 Adkins He’s back, baby!  You get a lot of Christian imagery and symbolism throughout the arc that culminates in this one page and its a glorious pay off and big moment.

It’s the background to my phone at the moment, too.

Ross I actually cannot think of a better transition to another one of my favorites: 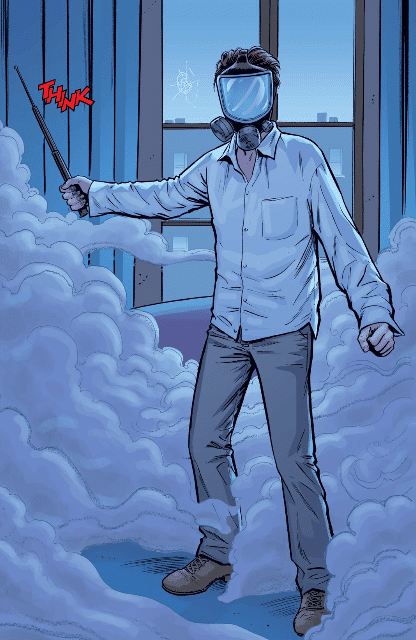 BECAUSE HOLY CRAP, THEY ARE BASICALLY THE SAME THING.

That’s from the second-to-last issue of Y: The Last Man, and SPOILERS: it is immediately after 355 has been shot.

I love this because it is the culmination of a huge, sprawling story, with every element–the gas mask, the baton, everything–tying back to an earlier moment of Yorick’s character development.

It’s one of those big rush-type moments, not unlike that Daredevil panel, and now that I’m looking at this, I get the feeling artist Pia Guerra might have read Frank Miller a few times.

Adkins It’s really interesting to me that our first two (serious) submissions are superficially unimpressive or weighty. Standing on their own without all of the narrative that preceded them, they aren’t impressive, you know?

Speaks to how the writing of a comic bolsters the art just as much and as often as it occurs the other way around.

Ross Absolutely. Neither of these are a “Face it tiger, you hit the jackpot” scene. But within the context of the story, they’re huge.

Adkins I have to confess that my second panel does stand on its own in a way.

To preface it: In 1992 I was only 5, so comics weren’t exactly something I was into, but by the time I turned 10 I was given permission to pick one or two out every time we went to the grocery store. The first hero whose titles I snagged each week: Superman.

It wasn’t until a couple years later that I overheard someone say that he had been killed and I was sure they were mistaken. Not Superman! He’s…well…he’s friggin Superman!

That’s when I discovered the Death of Superman. 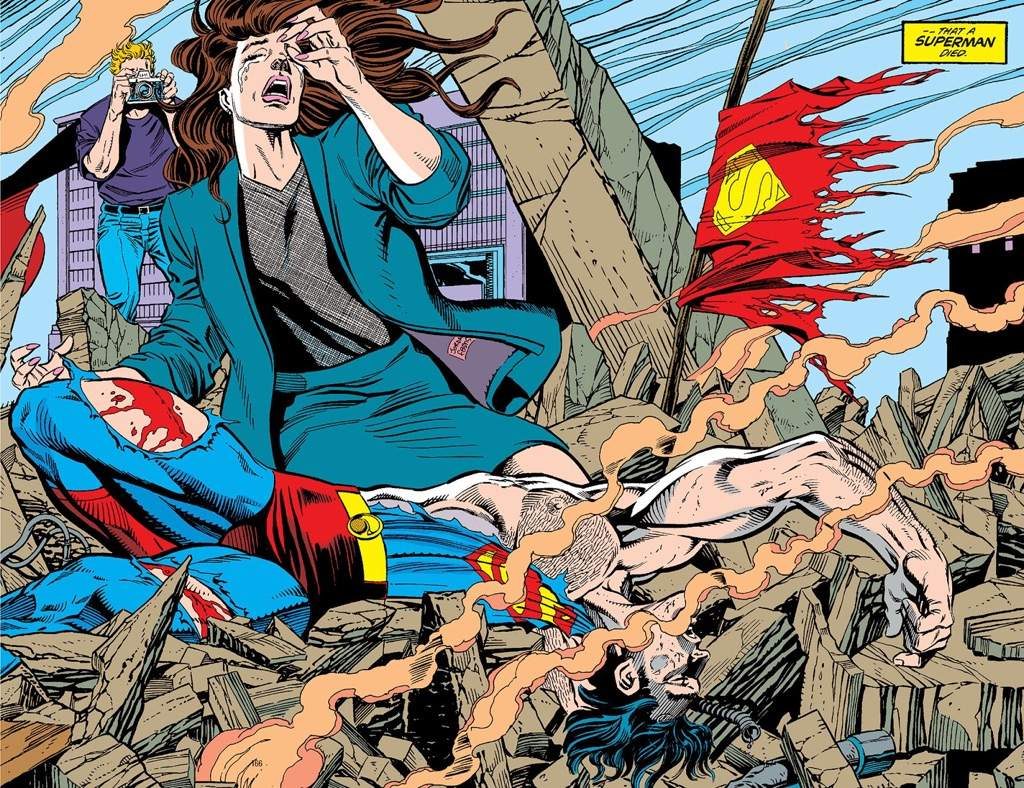 I couldn’t believe it years after it had happened, but I wasn’t alone. How many comic panels do you know of made national news?

Call it a gimmick all you want, this was a big deal when it happened.

It was just really jarring to see the Man of Steel lying in the rubble all bloodied like that given all of his crazy exploits, abilities, and previous victories.  My 12 year old mind couldn’t wrap itself around that and its stuck with me since.

Ended up reading (and loving) the novelization, too.

Because my final panel (well, I’m fudging that a bit, as you’ll see) is another Superman appearance:

Technically three panels, but who counts these days?

Adkins Oh my gosh, I love this moment, too!

What about this one helped it make your cut?

Ross Because it is the perfect Superman panel.

I’ll refer you to Glen Weldon’s excellent book, Superman: The Unauthorized Biography, where he writes about Superman’s motivation:

“He puts the needs of others over those of himself. [And] he never gives up.”

Every time somebody tells me they “Can’t relate to Superman,” or that “He’s too overpowered,” I refer them to this panel.

Because, if you’ll pardon the corniness, I truly believe that Superman’s greatest power is the love he has for every living thing on Earth.

Adkins Piggybacking on that idea, I love two things about this panel:

Ross Exactly. I feel like if more writers emphasized Superman’s basic HUMANITY, as opposed to his basic other-ness…well, we wouldn’t have gotten Batman v. Superman, that’s for sure.

Adkins Ha!  We won’t open that can of worms all over again here. Instead, we’ll invite readers to share their own favorite panels in the comments!  We invite you not just to drop us a pic, but tell us why it has stuck with you.

The average comic has, what? 80-100 panels in it (4-5 per page)? Hundreds if not thousands of comics later, those panels add up…but some rise above the rest without a doubt.

I’m Not Crying…You’re Crying! A Look at a…