Clave There is a little movie coming out soon that you may not be aware of. It’s a little Star Wars story called Rogue One. Our chat this week will most likely be effusive, gushy, sqeeeeeing, and general fanboy obnoxiousness, so let’s get right to that.

Joseph first. On a scale of 1 to 864 with 345 being the highest, what’s your excitement level for Rogue One and why?

Joseph I’ma go with “Buddy the Elf in the Mail Room.”

Clave That’s a lot of excitement.

Joseph Like, I’m pretty excited, but I’m not the uber-Star Wars fan that is just dying for new material.

Clave Joe is out of the chat.

Nash Joe is definitely dead to me now…

Joseph I’m not saying that I’m not excited! I am! 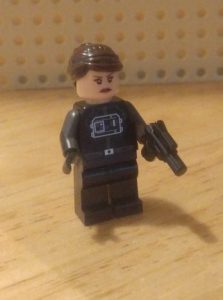 Clave Nash, what do you think?

Nash I am so excited I customized a Lego Minifigure to look like Jyn Erso!

My question is this: What do you think of these “Star Wars Stories”, the movies set between the big tentpole features? Is it a good way to bring more Star Wars to fans or is it a cynical cash grab?

Joseph Like any such effort, it’s all going to come down to execution.

Nash Well no doubt it is a cash grab…EVERYTHING is a cash grab now a days! But I am excited to see more of the story on screen regardless. And in my defense I couldn’t have seen the originals in the screens because, well, I wasn’t born yet!

I will shamelessly defend JJ Abrams after nailing The Force Awakens and the Star Trek reboots. He won’t let people phone these in!

I also like that the stories wil not start with the scrolling intro like the actual episodes do.

Clave I, for one, love it. I’m excited the get Star Wars stories that aren’t centered on a Skywalker and that can explore other genres outside of “sweeping space opera.”

Rogue One, for example, is more of a war story. It’s Stormtrooper boots on the ground, so to speak. What do you two think about the genre shift?

Joseph I think it’ll be great. The opportunity to tell different types of story, but set in that universe, will be freeing, I think.

We can see stories like this one, more personal stories (like the Han origin movie has the potential to be), etc…

Clave Why? I like one scene bounty hunters, although Dengar is my favorite.

Any bounty hunter movie they make can take my $16 for the movie ticket, plus $4 a pop for any comics they appear in, plus maybe an action figure or two. Why knows? I’m feeling excited about this whole thing!

Joseph $16?! Does your theater have gold-plated arm rests?

Clave It does actually. Reserved seating, with recliners. Once you go once, you’ll never go to another theatre.

Nash It’s so fancy Joe that we have to spell it the British way!

Clave I laboured over that spelling.

Nash I am as excited for the stories as I am the new episodes for exactly what Clave mentioned: telling about more than just the Skywalkers AND they can explore different genres. 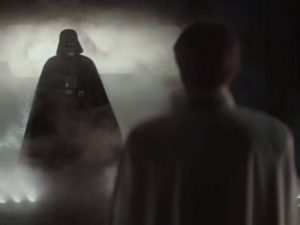 Clave What about the locales or scenery? Did any thing in the trailer get you excited?

Joseph I’m interested to see what they do with Darth Vader in this movie. He’s shown a couple of times, but only very briefly. I wonder if he’ll have any dialogue at all.

Nash I think the whole back drop looks kewl! I have been fighting the urge to find out as much info about the story ahead of time. I don’t know where it is to have taken place etc. I wanna go into this movie as fresh as possible.

Joseph Yeah, the locales look pretty incredible. It’s nice to see more of the galaxy, instead of just the major planets we’ve seen so far.

Clave Same. I’ve been intentionally trying to avoid much of the advance press and certainly haven’t been looking for spoilers. I’m going in with clear eyes and a full heart, so I can’t lose.

Nash The references have been tops today gents! #FridayNightLights

The one thing I haven’t seen yet are if there are Rogue One Legos…might have to update my X-mas list.

Clave OK, let’s end on casting. I’ll admit that I wasn’t familiar with Felicity Jones before this, but she’s a treasure. I really like what they’ve done with casting. Any other characters pop out to you, even if you don’t yet know their names? 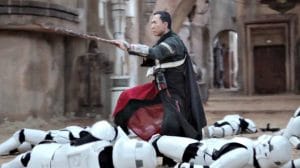 Also, on Felicity Jones. Well, actually, more on the lead being another strong female character… I love it.

Nash Forrest Whitaker is legit too, and Alan Tudyk (especially since it is just his voice).

Joseph Princess Leia is great, but she’s basically always tethered to Han or Luke. Rey was amazing in Force Awakens, but it also seems like she’s integrally connected to Luke.

Jyn might just stand on her own apart from the Skywalkers/Solos, and I can’t wait to see what that looks like in this universe.

Clave Well, much thanks to the Empire for always designing their weapons with an exploitable point of familiar, as it’s allowed us fans to have this movie. I’ll be sitting in my gold-encrusted theatre seat on opening day. Thank you, gentlemen, and may the Force be with us all.

Nash May the force be with you!

Joseph May the Schwartz be with you!

The 7 Best Christmas Movies for Nerds