Well, this is some interesting news for fans of both Dungeons and Dragons and of Penny Arcade and PAX. Chris Perkins, the principal story designer for Dungeons & Dragons at Wizards of the Coast, will give the opening keynote for the attendees at PAX South 2017.

PAX (Penny Arcade Expo) is a big deal and, although PAX South is one of the more low-key PAX events, it has still sold out with tens of thousands of three day tickets having already been purchased for the January 27 – 29, 2017, event that celebrates gaming culture.

Chris Perkins is no stranger to PAX. He has been the Dungeon Master for the annual Acquisitions Incorporated D&D show that has been played in front of a live audience for years at several PAX events. But this is the first time that the game has been played live at PAX South, signaling that Wizards and the Coast and Penny Arcade had enjoyed their partnership and wish to press forward for more. 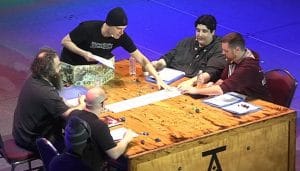 But even as Perkins is no stranger to PAX, him giving the keynote address is a big deal, as he joins the ranks of Wil Wheaton, Peter Molyneux, Ted Price, Jane McGonigal, and Kim Swift, all well known figures in nerd culture or video gaming.  What might it mean for D&D that Chris Perkins has been tapped to deliver the keynote?

It might signal more D&D being filmed for an audience. We’ve written before about that stratospheric rise of D&D as a spectator sport. In addition to Acquisitions Incorporated, there is the insanely popular Critical Role. And let’s not forget that the last Acq Inc was simulcast into movie theaters.

Clearly, this has been a financial and public relations win for both D&D and Penny Arcade. Perhaps Chris Perkins is delivering the keynote in order to make announcements about the future of the partnership. A second season of Acq Inc: The Series is in store perhaps.

It might mean new products from D&D that includes a video game tie-in. PAX mainly celebrates video games, so it wouldn’t be crazy for Wizards of the Coast to want to use that venue to announce upcoming plans in the digital realm. Of course, that would require Wizards of the Coast to have a new D&D game to announce, which is doubtful. But with the latest D&D video game being a flop, you’d think they’d want to jump back quickly into the market.

Movie news? This is crazy wild speculation, but maybe Chris Perkins will drop some hints about the upcoming Dungeons and Dragons movie. Movie news is unlikely, but PAX is a good crowd, so it would be a nice place to generate buzz.

It’s probably simpler than all that. Chris Perkins is a natural entertainer. He’s great in front of a crowd and he excels at telling stories. It’s likely he was picked to give the keynote because he’d do a good job at energizing the crowd in anticipation of a great weekend. He could regale the gaming hoard with stories of past Acquisitions Incorporated events, plus tease the next day’s session. He could thank them for their support while he got a couple of laughs. The keynote would be a total success.

A full list of PAX South 2017 exhibitors will be announced a little later. The full line up of panels at PAX South 2017 is now available via the PAX South site website. The panels include, of course,
the Acquisitions Incorporated game on Saturday, Jan. 28 at 2 pm. PAX co-founders Jerry Holkins and Mike Krahulik will play a hilarious round of Dungeons & Dragons with Chris Perkins serving as Dungeon Master. It was already one of the most popular panels at every PAX West. Now, the Acquisitions Incorporated game will make its PAX South debut with a lead-in of Perkins as the keynote speaker.

An Interview with Teos Abadia, Co-creator of D&D: Acquisitions Incorporated

An Interview with Teos Abadia, Co-creator of D&D:…