Creating D&D or Pathfinder characters is one of my favorite things to do as a nerd. It’s my lonely fun. So here are some character designs and ideas for you to pilfer either for your own character or for use as an NPC in a game. 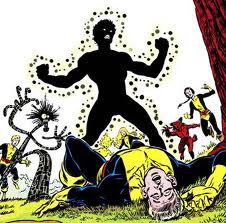 Descosta is rolled as a 5th level character to fit our jump in point for Storm King’s Thunder. I rolled him as a sun elf and gave him the ‘Noble’ background in order to associate the haughty rich kid vibe that Sunspot had in the comics.

Then to mimic the comics book character’s hot-headless and mutant power strength, I rolled him as a barbarian. Here is his character sheet, courtesy of Hero Lab. 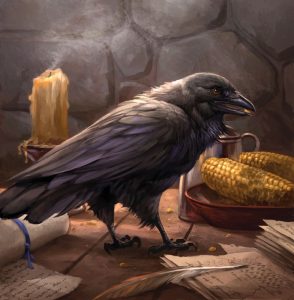 2. Lavina Arbuckle is a blind Dragonborn Warlock that only speaks through her raven familiar, Fowlton. Wherever she goes, other ravens appear to be at her call, watching like sentries in trees, on rooftops, and silently flying just on the edge of sight.

Impeccably dressed and eschewing the predicable black-robed attire typical of a warlock, Lavina wears a tailored blue silk jumpsuit embroidered with what is assumed to be spell enchantments (indeed, Lavina “clutches” the embroidered words and then “flings” them at opponents, an act that works as if she was verbally casting the spell).

OK, so a mute character with raven familiar who uses her clothing as a spell casting focus might be a bit too much for a DM that “hems” close to the rules. But what a great NPC! And if your DM goes for it, a dragonborn warlock would make a fine addition to any party. 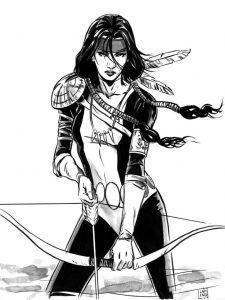 3. Hannier Bokamper is a rowdy and brash tomboy, as well as expert marksman with a longbow. She wears white polar bear armor.

In addition to her fierce outspokenness, Hannier Bokamper is a fiercely compassionate and caring individual. In fact, this personality trait coupled with her armor has earned her the nickname “momma bear” among her party. What she hasn’t shared with her party is that she lost her child years ago.

I created a character sheet for Hannier, logging her as a 5th level ranger (standard PHB), plus gave her a level of Cleric (Life Domain). Note: While I originally flavored her after Dani Monster of the New Mutants, I took her another direction. This presents her as a wonderful ranged character with a touch of healing to flavor her caring, motherly nature. You can download the character sheet here. 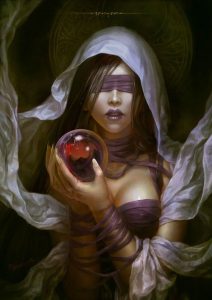 4. Alizebeth Wonders is a young lady blessed and cursed with the ability to glimpse the future. Alizebeth is plagued with the spell of blindness from sun up to sun down and she hires adventurers, insisting on checking in on them once per day via crystal ball.

Being that she is sightless during the daylight hours, it makes the most sense to use Alizabeth as an NPC. She would make an excellent quest giver and her strange condition makes her interesting enough that the players would enjoy interacting with her. In addition, the fact that she insists on interacting with the PCs via crystal ball creates opportunities to provide further depth the the character and her relationship with the player characters.

Her ability to glimpse the future would need to be used carefully, but it is a great opportunity to provide foreshadowing for the adventure and create scenarios where the PCs are essential acting for or against fate. 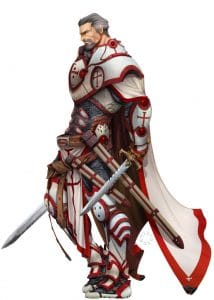 5. Traves Bodger sees 2 heartbeats into the future. This makes Traves a remarkable fighter as he knows the opponents moves before his opponent even makes them. But if Traves’ heart races, it lowers that time forward he can see by a fraction of a second. Therefore, Traves has conditioned himself to be a really cool cucumber, keeping his heart rate low and steady. In terms of roleplaying, he never gets riled or aggravated.

A loose DM could give Traves a +1 proficiency bonus across the board to add a mechanical advantage to the flavor that he can see three heart beats into the future. A stickler DM would see this as OP, so simply play up Traves coolness in roleplaying scenarios.

I rolled him as a 4th level paladin and his character sheet is here. 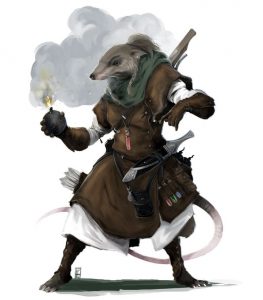 6. Jonno Harburn is a ratfolk character who carries his skunk familiar, Peor, on his back in a wooden cage. Ratfolk is not a race that is available in D&D 5e, so Jonno Harburn is rolled for the Pathfinder RPG. But also feel free to substitute gnome, kobold, or another small race if you want to play him 5e only. The point is a quirky little character with a skunk familiar.

Alchemist is a class in testing for D&D 5e, but it is a common clads for Pathfinder, so here is Jonno Harbor’s character sheet for that system. (Note: I didn’t satisfy all compliance rules, so consider this character more of a starting point for inspiration.)

A shifty little rat folk alchemist who specializes in disease and plagues would be an interesting addition to a party. Plus, the addition of the skunk familiar would be fun as well.

7. Finally, there is Yoruba Oya, because a wizard is fun for every party. Here is a full writeup for Yoruba.