Weekly Nerd Chat: What Movies Are You Looking Forward to in 2016?

[divider] What movies are you looking forward to in 2016? [/divider]

Jason (Co-founder of Nerds on Earth and owner of an unlimited movie pass): And let’s do this.

Ross, Jennifer: have you seen the plethora of movies that nerds should love coming out in 2016? What movies are you looking forward to?

Jennifer (Fierce Amazonian Warrior): I have a few I can’t wait to see. starting with Deadpool. I mean, who isn’t ready for that? I’m excited and very nervous about Batman vs Superman because…well, I think the only good thing with that movie may be Wonder Woman. And I absolutely LOVE Wonder Woman.

And I’ll be the one to say that I can’t wait for Finding Dory.

Jason: I am with you. Some of the upcoming movies look awesome and some make me hold my breath. Like you, nothing about the Batman vs. Superman: Dawn of Justice makes me think there is any chance of that being a good film. 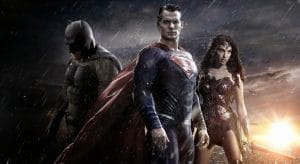 And this summer looks to continue the nostalgia streak with 2 movies in particular: Independence Day and Ghostbusters.

Jennifer: I really feel like Hollywood can’t think of anything new to do, though. That said, I am excited about those two.

Jason: I could not be more excited about the Ghostbusters movie! The actress, the idea, the director all make me think this could be amazing!

Jennifer: Same here! That group of actresses can do so much!!

Jason: Spy with Melissa McCarthy was so underrated last summer and the same lead team is making this!

And Jason–as the resident DC fanboy around here, I suppose I should take this time to educate you on why Dawn of Justice will, in fact, be a cinematic masterpiece.

Unfortunately, I can’t. The movie looks like hot garbage, and I predict it will lead to the destruction of the whole “superhero” genre.

But I will put in my vote for Suicide Squad. Despite what I just said, I’m hoping that will be amazing.

Jason: So do you blame Zach Snyder? Because it seems like Warner Brothers has decided they are okay with making 750 million dollar drudgery inducing movies with Snyder instead of amazing, billion dollar happy superhero movies with anyone else. Literally anyone. My 4 year old nephew has a better handle on DC characters than Snyder.

And his pitch for a movie is pretty good.

Jason Every major superhero studio needs a guy who says “No, you haven’t have 3 villains. Didn’t you see the what happened when Spider-Man did it?”

Pitch me Suicide Squad because I am too quick to lump it in with the rest of the hot mess DC has put out. Why should we have hope for this one?

Ross: Suicide Squad: the C- and D-List supervillains of the DC universe are a black ops team for the US government. Unlike Superman, SS is SUPPOSED to be dark and mean. It’s a bunch of killers and terrorists that hate the world and each other. In other words, perfect for Zach “Superman’s A Murderer” Snyder.

Jason: Who is going to be the focus character?

Ross: My money’s on Harley Quinn and Deadshot. On one hand: female main character! On the other hand: she’s a psychopath. Of course, Jared Leto’s Joker will get a lot of screen time.

Jennifer: Harley Quinn as the focus character would make me super happy.

She’s not as crazy as joker and she cracks me up. I need a Harley and Ivy movie.

And what’s wrong with a female psychopath focus character? Joker has been in that role before. Bring on the crazy girls!

Jason: It certainly feels like it could fit the darker tone DC has embraced. But, what else is out there in 2016 that you are certain to see?

As for me, I think it is going to be very interesting to see what MCU twist they put on Civil War in the Captain America movie. What does the end of that look like?

And can you really make Apocalypse a scary meglomanical bag guy in a live action movie? I mean look at how silly he was in his first fight:

Ross: Ha! I hope that makes it into the movie.

Jennifer: I feel very excited for Age of Apocalypse but Fox has kind of been hit or miss with our favorite mutants. I love Storm’s mohawk but I’m slightly nervous for the movie over all. I’ll see it, that’s a given. I mean, Jubilee is wearing her yellow coat! Flashback to my childhood!!

Ross: On the mutant front, I’m excited to see what Ryan Reynolds can do with Deadpool. It seems so unlikely–like it’s the movie that people wanted to see, rather than studios. And then there’s the next Star Wars. Rogue One, right?

Jennifer: All the Star Wars. All the time. We’ll see how that goes.

Jennifer: It’s a huge endeavor. They have a lot to live up to. I wish them the best of luck.

Ross: I mean–statistically, some of them will be…I mean, I don’t want to say BAD, but you’re making a movie a year for the next six years. They can’t all be great. But I’ve got high hopes.

Jason: “High hopes.” That’s a good way to describe my thoughts toward 2016 movies for nerds.

Thanks everybody. We’ll chat again next week.

What movies are you looking forward to in 2016? Let us know in the comments.

Getting Up to Speed on Agent Carter Season 2

Creating Memorable NPCs: Roll 2d10 and Use this Table of Quirks!