Rogue One, the next Star Wars movie to hit theaters, dropped a terrific trailer, as us nerds continue to think away at the possibilities of where JJ Abrams and company will take the Star Wars universe.

If you haven’t seen the trailer, you can find it in our Friday Five:

While at times we all can agree that keeping the overall Star Wars universe small helps in regards to storytelling. After all, the Star Wars movies are about the Skywalkers and their influence on a galaxy far far away.

On the other hand, us Star Wars fans get greedy for more, and the diehards in particular might still be stinging that the massive EU (Expanded Universe) is being left behind. Personally, I like the direction that the new canon is going. And to be honest I don’t think it is actually all that small, especially when you take into consideration the animated Clone Wars and Star Wars Rebels, the “side offerings” like  Rogue One, plus the new books and comics that are doing a nice job adding to the mythos. These series really bring a lot more backstory and overlap to our familiar story from the movies.

However even in the feature movies, we see more groups and characters being introduced. One of those groups I’d like to say more about is Kanjiklub! 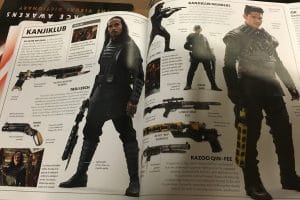 Kanjiklub—along with the Guavian Death Gang—made an appearance in Star Wars: The Force Awakens, aboard Han Solo’s ship, the “Eravana.” While these may have seemed like insignificant characters who were mostly staged to be eaten up by rathtars, side characters like kanjiklub shows a look into the larger Star Wars galaxy. Kanjiklub represents the really rough part of the outer rim that we only ever get briefs references to in the mainstreams movies.

Kanjiklub’s origin dates back to the reign of the Hutts. (The Hutts are still a major presence in the Clone Wars animated series which gives us some optimism for more Kanjiklub appearances!) Kanjiklub are known as renegade slaves of the Hutts and after they broke free they hit the prime of their operation approximately 30 years after the battle of Endor.

I would actually take Han Solo’s brush with them and the Guavian Death Gang as a strong allusion that our great vast galaxy is finally catching up with our intimate setting for our protagonists. Kanjiklub is first mentioned in a short story, The Perfect Weapon, which was part of the “Road to Force Awakens” series. They are also mentioned in the Chuck Wendig novel Aftermath: Life Debt which was released in July of this year.  (I have yet to pick up my copy, but I am excited to read it!)

The fact that Kanjiklub is being mentioned makes me think that at some level we will be seeing/reading/hearing about this gang more, and this is a good thing for the Star Wars franchise in a few ways. While I hope that the true Star Wars episodes stay very much family friendly, I think that Star Wars can show us the seedier underbelly of the galaxy in the off shoots as they always have done in their books. Kinjikulb certainly represent that aspect of the Star Wars world.

A while back Clave, Atkins, and I did our weekly chat on what we considered the best Star Wars planets and the ones we’d like to see more.

I think each of us would agree that there is so much more to the Star Wars universe that we would like to see more of or to be introduced to in the cinematic saga. The “off year movies” like Rogue One and newer books a perfect way to go deeper into these other cultures and environments, much like TV series already do with standalone episodes for specific characters. The Walking Dead show has been especially good at this recently, committing entire episodes to one character of a string of episodes to breaking up the large group and showing interactions of a few smaller groups of characters as a change of pace. 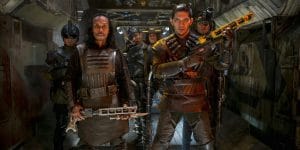 I certainly do not think we need a standalone movie for the Kanjis, but I would venture a guess that they could be major players in the Solo/Fett standalone movie. And while the release date of that film is a ways off, I’d imagine they would make appearances here and there to make the audience want to know more. And if you don’t want more of Kanjiklub, then tell that to Kanjiklub.

Learn more about Kanjiklub and other Star Wars characters in the Force Awakens visual dictionary.