Could Agents of SHIELD spin off be the West Coast Avengers?

We’ve all heard the scuttlebutt that Marvel’s Agents of SHIELD was potentially going to spin-off another television series, but we have absolute zero (273.15 degrees Celsius, for those of you who are interested) idea what the new Agents of SHIELD spin-off details.

Earth Nerd Jason had some ideas, mostly ones he felt might screw things up.

I had some time to speculate on how to do a spin-off of Agents of SHIELD, so I have an idea of my own. I’ll be upfront that this idea has as much chance as the new Fantastic Four film at winning an Oscar, but I think you’ll like where my head’s at. Besides, the internet was invented to provide humans with a platform for baseless speculation.

[divider]Could Agents of SHIELD spin off be the West Coast Avengers?[/divider] 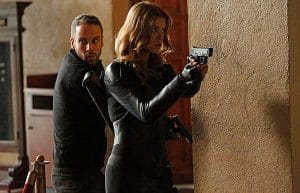 The talk is the spin-off will center on Agent Morse and her ex-husband Hunter. So, the roster will include Mockingbird, who was a key member of the West Coast Avengers. [I hope you like where I’m going with this, because I’m all in.]

Agent Hunter seems to have filled the ex-husband role that belonged to Hawkeye in the comics. This is something I’m OK with.  The banter between Agent Morse and Agent Hunter on Agents of SHIELD is excellent and enough, I think, to carry a large portion of the proposed spin-off.

And even though Jeremy Renner is over-rated [send angry letters to 4000 Warner Blvd., Bldg. 168, Burbank, CA 91522], the West Coast Avengers revolved around Hawkeye. So, unfortunately, Agent Hunter will not cut it alone, and any Agents of SHIELD spin-off that tries to have a West Coast Avengers flavor will very much need to have a stellar cast to make up for the lack of Hawkeye.

So let’s talk about a potential cast, but first let me take you on one quick rabbit trail. I highly doubt Jeremy Renner will ever appear on Agents of SHIELD, despite there being a let of speculation that he may. Sure, Samuel L. Jackson made an appearance, as has Lady Sif, but the reality is that movie contracts very rarely allow for those type of television appearances. It’s disheartening to think that Marvel’s master plan is largely dictated by the lawyers who write the contracts, but that’s the reality. Unless they think Jeremy Renner appearing on Agents of SHIELD gives them more PR than him appearing on Jimmy Kimmel and doing a canned interview, then its not going to happen. So, no Hawkeye on SHIELD.

So who could be the cast, other than the previously mentioned Mockingbird and Hunter, albeit in a Los Angeles setting.

Tigra. Tigra would be tricky to pull off, but costuming, make-up, and CGI are doing incredible work, even on a television budget, just look at The Walking Dead.

Much like Mystique in the X-Men movies, Tigra would require top to bottom make-up and prosthetic work, something that, while technically feasible, would certainly stretch the budget. But perhaps many of Tigra’s scenes could be with her filmed with her wearing a more typical SHIELD uniform that provides more coverage, thereby lessening to load on make-up. 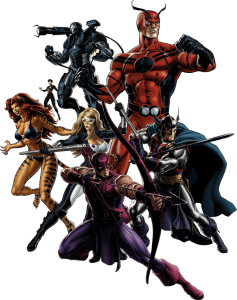 I’m calling it plausible, if unlikely.

War Machine would be unlikely due to the Iron Man films, even though he’d be a nice counter to Deathlok. Scarlet Witch and Vision are making their film debut soon, guaranteeing they won’t make a TV appearance (But wouldn’t that be something?). Wonder Man’s power set plays poorly for television, but what about…

Moon Knight. I’m not sure where Moon Knight might fit in Marvel’s plans, but I think he could play nicely on televisions, even if he might fit better as a character introduced during Netflix’s Daredevil, given the tone and setting. Agents of SHIELD is already tackling the mystical with the intorduction of the Inhumans. Perhaps the spin-off could use a mystical caped vigilante who fits a more black-ops mold.

U.S. Agent would be an interesting addition to the Agetns of SHIELD spin-off, provided they play down the Captain America wannabe stuff, and play up John Frank Walker, SHIELD Agent.

Granted, there isn’t much to work with her and I was upfront that this was wild speculation, but the West Coast Avengers comics held a special place in the hearts of many comic fans. A guy can dream that Marvel will try and give TV even a little of that feel, even if it’s just with the setting and a few of the primary characters.

What do you think of a potential Agents of SHIELD spin-off that would have a West Coast Avengers flavor? Let us know in the comments.

Nerd Rant!: C’mon! You are Screwing up this Agents of SHIELD Spin-off!

The Death of a TMNT: Why It Had to be Donnie