(Note:  The first mention of each movie is hyperlinked to the corresponding trailer on Youtube, so click away!)

Adkins With SDCC (San Diego Comic Con) behind us, those who didn’t gain a coveted seat in Hall H can now feast our eyes upon the trailers that were debuted within. And feast we have. Which of the reveals has us most excited? Jason, Ross, and I will chat about just that in this week’s Nerd Chat.

Where do we even begin, guys?

Jason I think that is pretty easy for me. The best trailer to me: Wonder Woman. I was astounded by how much that trailer made me excited about the movie.

Adkins What, specifically, has you two excited?

Ross I still think all the DC trailers (Suicide Squad notwithstanding, and we can talk about that in a bit) are all too monochromatic, but I think they’ve learned their lesson from the nightmare of Batman v. Superman. 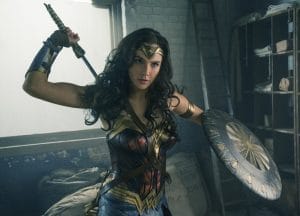 Namely: heroes should do heroic things.

We see Wonder Woman on Themycira, fighting alongside Steve Trevor…it really feels like a real mythology is being built here.

Jason To me, the trailer showed some thoughtfulness. When the metal boots and shield combine to make her essentially bulletproof, that was epic. She is carrying her sword in her dress. And the comedic beats were great as well. I can get behind this movie.

Ross Full disclosure: a big part of my excitement is less about the content of the film itself (see, again, the psychic devastation wrought by Batman v. Superman) than this being the first big-budget film about a female superhero (THE female superhero), and it looks like they’re really trying.

Adkins This is where both Morgan and Jennifer would be whooping their agreement with you, Ross! In their absence, I’ll drop one of their characteristic “yaaasssssss”’s on you.

Jason Totally agreed. This one matters and they appear to be trying to do it really well.

Ross I think there’s a natural segue from the Wonder Woman trailer to one that includes not only Wonder Woman, but also the rest of the Justice League.

I am, of course, referring to the Lego Batman trailer.

Jason I missed that one somehow in the flurry. Tell me it looks as funny as the Lego movie!

Adkins Same! I missed it. Watching it now. Two seconds… 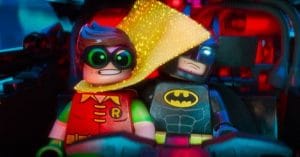 Adkins Oh, my gosh. I’m laughing out loud as I watch this.

I’m in for this one. In fact, it might be in my top two now.

Jason Wow. That Robin pants joke alone is worth the price of admission

Arnett really is great at this weirdo Batman voice and the focus on raising a “son” gives it some necessary plot. I really like the potential on that one.

Ross I get the sense that there’s very little communication between the teams working on this and Snyder’s people, and that’s a shame. Even if the Justice League trailer actually had some levity (dire prediction: the jokes that appeared in the trailer were all the jokes in the movie).

Jason So, most definitely have the concern on the Justice League trailer. I want to think they have learned something but I am just not quite there. That said, I liked Ezra Miller’s Flash and I have high hopes for him.

Adkins The Flash stuff was easily the highlight, but what Marvel gets that DC hasn’t quite grasped yet is that you can spread the laughs around a whole cast instead of having a single class clown type character. I fear that’s what we’ll get from Flash in JL.

Jason Agreed. He definitely had comedic timing but it can’t be just him. And Aquaman appears to be the Drax of the Justice League.

Ross DC has been embarrassed by Aquaman for decades. I kind of hope he’s a breakout–Jason Momoa certainly has chops–but that “talks to fish” joke doesn’t give me a lot of hope.

Jason I wish they had dyed his hair but I certainly am not going to ask a man that looks like that to do anything to his hair.

Strangely, and I don’t know if it is because the previous ones have been so good but I was very lukewarm in the latest Suicide Squad trailer. I will still go to see it but it that had been all I had seen, I’m not sure I would have.

Adkins Yeah, the one thing Suicide Squad has going for it is multiple glimpses and therefore a better feel for what it will be like. It continues to grow on me, though. 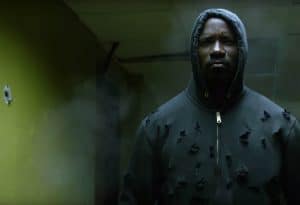 Jason So, we still have Marvel things! I have to say, the Luke Cage trailer looks great and the hip hop soundtrack was an inspired choice. This is going to be a binge watch if ever there was one!

I really dug that one. Not a super in-depth look, so nothing really to criticize. All I can say is, “Yeah, I really want to see that.”

Jason Netflix is very careful about not giving away too much. The Iron Fist and Defenders pieces were really short teasers, which makes sense because they aren’t even deep into production.

Adkins And if I may drop a bit of a surprise on you two: The King Kong trailer piqued my interest in a way that I totally did not anticipate. 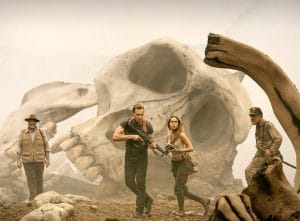 Ross The Vietnam-era setting was a surprise.

Adkins Based on the last Kong entry (the one with Jack Black…or at least that’s the last one I saw) I almost didn’t even bother watching this trailer, but I’m glad I did.

Jason Definitely. I will say I watched Kong and thought they maybe watched a little too much Jurassic World. That may be my one worry.

The unexpectedness of the Blair Witch trailer hit me hard. No idea anything was in the works, the previous sequel was garbage and as a non-horror movie guy, the original scared the crap out of me. I am most definitely hitting this one up on opening night with a large crowd.

Ross I don’t have a dog in that fight. Haven’t seen the first one.

Adkins I was blindsided by that one, as well. Looks like it has some serious scare potential, for sure.

That was a huge part of the original’s scare factor in my opinion.

I’d be willing to bet the production cost of the new one is a bit more than the first, too!

Ross By a few digits, yeah.

Jason If not the first, one of the firsts and, I would argue the best. Interesting way to revisit the premise. It is, after all, the movie that made the most money ever versus what it cost to make.

Adkins If our popcorn approach to these trailers is any indication, we’ve got a lot of promising material coming our way over the next year or more.

Jason So, still more great stuff out there. You can see why Hall H has become such an iconic place, even with a lot of movie studios pulling back their Comic Con presence!