Adkins Jason, Heaton, and I all listen to and enjoy The Adventure Zone – an actual play DnD podcast featuring Justin, Travis, Griffin, and Clint McElroy (totally related) that releases new episodes every other Thursday. The guys have been rounding up powerful and dangerous relics from all over the realms – each with their own thrall. But no thrall yet has been as strong and tempting as that from the Temporal Chalice.

In Episode 48, the Temporal Chalice tries to persuade each member of the party in turn to pick it up and undo their greatest mistake. And what an episode it was! It is so good, in fact, that we decided to dedicate this week’s Nerd Chat to the role playing within.

Jason The show has definitely had some great moments over the course of its run. The DM Griffin has worked really hard to make the story compelling across the whole run. But this episode had the best roleplaying to me and it is definitely worth checking out.

Adkins Oh, unquestionably. Not a single die was cast, and yet I consider this to be the best episode yet. Hands down.

Jason And to me it was subtle, but the whole set-up of this arc moved towards this episode and the individual stories.

Heaton I don’t know, it was pretty sweet when they had the giant chase sequence with fantasy Mad

But seriously, I agree, this episode did a great job showcasing Griffin’s writing.

I’m really impressed by all he’s come up with. If I’m not mistaken, he wrote everything from scratch except the very first thing they did, right? I think it was from the beginner box.

Adkins Yeah. That first bit was the Lost Mines of Phandelver; a short adventure included in the 5e beginner’s box.

Jason Yep. They ran a regular module and after that, Griffin has been free forming, building his own campaign.

The previous ones have included the train heist arc (Murder on the Rockport Limited), the Fast and the Furious Medieval Times arc (Petals to the Metal) and Crystal Kingdom dungeon like arc that I think was just named that to redeem that Indiana Jones movie.

Adkins So let’s talk about the Chalice’s attempts at persuading each hero to succumb to her thrall. Griffin did an amazing job of personalizing each temptation (as opposed to the other items’ voices), but the characters did a fantastic job, too, of countering the thrall with logic true to their PCs.

Heaton I’m not sure how much was on the fly, but I did enjoy the fleshing out of the boys’ back stories.

Jason So each of the three characters brought something different to the table. We had Merle, the cleric, Taako, the wizard and Magnus, the fighter. Of the three, which one grabbed you the most? By working on the backstories in a 1:1 environment with the DM, I think it really let the characters thrive and become richer.

Adkins So Taako’s backstory was my favorite, no doubt; although I felt that Magnus’ temptation was way more impacting.

Heaton Out of the three, I’d say Magnus’ was probably the most engaging, which makes sense since I think they said he did some workshopping of it in a Q&A with fans previously.

Jason Personally, Magnus’ was the most impactful. It explained who he is and what motivates his character. And while I could argue that it is a bit of a trope, I really did enjoy the backstory. And when the moment of decision came, I appreciated what he offered as his reasoning.

Heaton I did like Taako’s story. Justin has mostly played him as a real goofball, so it was nice to get some more serious, personal images of him.

Adkins Taako’s justification for turning down the Chalice was my favorite of the three, though! He was actually relieved. That retcon totally worked for him, and it made me laugh.

Heaton Also, I found it interesting that Taako was apparently kind of a prima donna jerk when he was still famous.

Wonder if some of that will come back now that he no longer feels responsible?

Jason The angle that they added to Taako as him being on the run from a guilty conscience was really great. It suddenly opened up the character to a deeper understanding.

And him not being guilty of it could bring back some of that arrogance but it also could make him want revenge. I think if I was his DM, they might see an ad for the other guy’s cooking show pretty soon.

Adkins Ha! That would be hilarious!  And totally fit the vibe of TAZ. 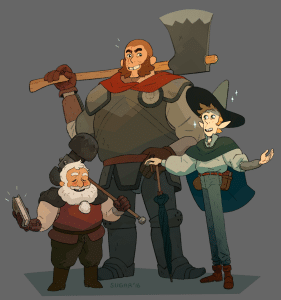 Heaton It was a little bit of a bummer that Merle’s chance to change history was just a part of the adventure we’ve heard instead of some new revelation like the other two, but I did still enjoy what he shared about his life before we met him. Can’t wait to hear more about beach dwarves!

Jason Merle’s story was decent but I think in some part it suffered because, if you listened to the podcast, we already knew his regret.

It felt like a failed chance to do something different and deeper with the character. But it wasn’t bad; it just wasn’t as revelatory as the other two characters.

Adkins I don’t think Clint had much backstory for Griffin to work with.

And for Griffin to ask for such a thing ahead of this episode might have tipped his hand a bit. I like that it felt like a surprise to all involved.

Jason So, part of what made the whole thing work is that this whole arc has been set-up as almost Groundhog Day D&D. The reveal at the end of the first episode of this arc had me fist pumping; with Griffin’s background in video games (He works for Polygon), it was a perfect idea. But, towards the end, he is bringing it all the way back around to they really do get a chance at a do-over.

Heaton I was most excited with the Groundhog Day reveal because it brought full circle what Kravitz said in the Crystal Kingdom arc about how many times the boys had died.

That shows a lot of planning on Griffin’s part.

Adkins Definitely. And just when I thought the Chalice was done…it had one more offer to make: Leave Kurtze, the boy orc, in captivity and save Phandolin. And Justin’s counter to it was genius! He pointed out that in this case the Chalice was highlighting the one thing they CAN change without mentioning at all all of the stuff they DID change. I might have cheered out loud a bit when he said that.

At no point – not as individuals, and not as a group – did they just say, “Nah.” They were well-reasoned in character, and that is a huge part of what made this work for me.

Jason Yes! It would have been easy to say “No” because it feels like that is what you’re supposed to do. They did have good reasoning and Griffin did good DMing in getting that well expressed in their role playing of it.

Heaton While we learned a lot this episode, do you two have any guesses for what’s up with the long static parts of the boys’ histories?

Jason So, I have two major theories. My theory about the static: they are going to do some retcon storytelling in a future arc. Maybe each one plays the younger version of themselves, while the other two play new PCs.

My other theory is that this is the end for these characters. Based on some of the chatter post-episode and during the commercial segments, I think they may want to mix it up and do new PCs. Maybe even switch out who is DMing, etc.

Heaton While it makes sense as something to be left open for later visiting, the amount of planning and

interplay between the arcs I’ve seen leads me to believe that Griffin already knows exactly what is going on behind that static.

Especially since in an earlier episode, the boys were told that they are special in some way by the oracle (I think that’s who said it), and not just because they’re from outside the bubble. I bet something happened to all three in those hidden times that ties in with that.

Jason It certainly feels like something could be up with the static. I just couldn’t follow the through point of what the common time or experience would be. Unless the fish on the Moon took it from them.

Adkins I’m along for ANY of the directions you guys theorized, for sure! The Adventure Zone (which was brought to my awareness by none other than Heaton himself) has quickly established itself as one of my favorite podcasts.

Jason Most definitely. There are several great D&D play podcasts but this one is good, getting better, and I can’t wait until it comes out every other Thursday.

Editor’s Note:  The pictures in this post came straight from The Adventure Zone’s tumblr page.  From top to bottom, the credit for the images belong to Andrew Soman, Steven Sugar, and Justin Gray respectively.

Reviewing the Kobold Guide to Plots and Campaigns: +1 Int For DMs