At DragonCon 2016, I was fortunate to be able to listen to some Marvel comic creators talk about the diversity that is seen in Marvel’s current “All-New, All-Different” line.

Officially, Marvel’s All-New, All-Different Marvel is a branding for Marvel Comics’ entire line of comics. It went into effect after the 2015 Secret Wars crossover and was to represent the new-look Marvel Universe, with over 60 relaunched first issues.

Despite All-New, All-Different meaning more and it being inexact, many folks still associated All-New, All-Different solely with Marvel increasing diversity in their titles. For example, the female X-23 replaced Logan as Wolverine, Miles Morales has a title alongside Peter Parker, and Sam Wilson was in the Captain America uniform.

Even the bloggers represented in the room were a diverse crew, with me sticking out like a sore thumb as a white male. Accompanying us all was the reassuring presence generated by what felt like a full battalion of women cosplaying the Carol Corps.

So what were a few takeaways from this meeting with the creators? 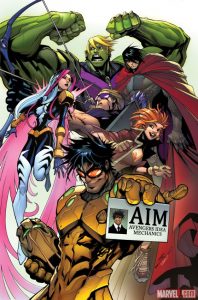 Marvel is taking an approach that allows comic readers to both have their cake and to eat it too. Peter David is always happy to chat. One thing he said was that throughout the history of comics, there has always been an effort at reinvention. But he admitted it is more acute of late. “Throughout that”, David said, “Marvel always respects a reader’s long time investment in a character.”

David was speaking specifically about Marvel’s intentional effort to empathize with the long-time reader who has nostalgia for older characters the way they’ve always been. This is held in tension with the need to create, innovate, and tell new stories with new characters. Practically, Marvel approaches this by have Peter Parker appear in his own title, while also having Miles Morales have a title. Having two Spider-Men plays to two audiences.

This is not a new thing. While it was far from a perfect effort, let’s remember that comics have often been ahead of other media types when it came to representation. Chris Claremont, for example, prominently featured female characters in the early 80s. And Luke Cage was created in the 70s, even if it was influenced by Blaxploitation.

Sure, these were baby steps. But a baby step is still a step. Marvel current creators insist they are just carrying forth this long tradition with Marvel. They also admit they want to turn those baby steps into giant leaps, where possible. 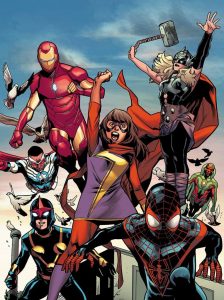 The pushback is uneven and much less than it feels at times. Again, it was Peter David who was able to give a veteran creator perspective on the issue, as he has been the writer that has personally introduced many changes to characters.

David said there was very little fan pushback when Shatterstar and Rictor were first acknowledged as gay in 2009, with the notable exception being Rob Liefeld who claimed that Shatterstar is “a warrior, a Spartan, and not a gay one.”

On the other hand, David said the fan pushback was fierce when Monet was confirmed as Muslim, although as a citizen of Algeria, in which Muslims are at about ninety-nine percent of the population, it would be hard to imagine she wouldn’t be Muslim.

Keep in mind that these two characters were from the same book from the same time period. But the diversity was accepted unevenly by fans. I guess Marvel should call it “Some-New, Some-Different.”

Character renaissance. Other characters like Luke Cage have been around since the 70s, but are seeing renewed popularity due to their Netflix shows. Sanford Greene is a black artist who draws the All-New, All-Different Power Man and Iron Fist. (He’s also one of my very favorite artists!)

Greene spoke at how comic books represented his childhood and told stories how he’d listen to rap music as he read comics. Needless to say, illustrating Luke Cage is meaningful for him. And Greene (and Black Panther writer Ta-nihisi Coates) are clear examples that minorities have long read comic books, it’s just know that the greater industry is beginning to fully acknowledge it.

She joked that most of our families “have a Civil War at the Thanksgiving dinner table.” She also reminded that it’s foolishness to think everyone looked the same. So different colors, shapes, and sizes shouldn’t be controversial among our heroes.

Alas, comic readers want things to change as long as they always stay the same. Acknowledging this, Richardson described comic book characters as “mutual friends we all share.” And many of these “mutual friends” have been with us for decades, so it’s only natural we would feel a sense of possessiveness of them.

Sameness is boring. Let’s loop back to Shatterstar, a character created in the 90s, a decade that most comic experts consider the period where comics died creatively. All characters were “Olympic Greek warriors”, consisting of big guns and pouches and radness that made it difficult to tell them apart as characters.

Alas, when characters look and behave so similarly, you have to revert to logic puzzles to tell them apart.

(You get two questions.)

OK, I maybe got a little dramatic there, but it’s only because I welcome diversity in comics. I had wanted to let the creators fully represent themselves, but I do want to add a bit of my own perspective as we bring this to a close.

I have read decades of Thor comics and love the character. Yet I welcome Jane Foster as Thor, going as far to say it’s been one of my very favorite stories the last few years of comics. Us nerds who hunger only for nostalgia still have Walt Simonson’s Thor run, but now we are getting these wonderful new stories from Jason Aaron that star Jane Foster as Thor. That’s certainly having our cake and being able to eat it too.

Plus, the creation of new heroes like Miles Morales and Ms. Marvel acknowledge what has always been: people of all shapes, sizes, religions, and orientations have long been comic fans. All-New, All-Different Marvel simply represents that.

Marvel did not make a Misty Knight & Colleen Wing…